Armament deals in focus as US defence secretary visits India

Armament deals in focus as US defence secretary visits India 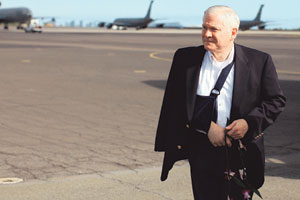 Moving closer: Robert Gates, with his arm in a sling from slipping on ice last week, at Hickam Air Force Base in Honolulu on Wednesday.

Gates’ visit comes as US companies Lockheed Martin Corp. and Boeing Co. are competing with Russian and European rivals for one of India’s biggest ever arms contracts, a potential $10 billion deal to sell India 126 fighter aircraft.

Burgeoning arms deals may also help pacify Washington, frustrated at India’s apparent climbdown over a nuclear deal with the US that President George W. Bush had called “historic".

The Indian government put that deal, also known as the “123 agreement", on ice after opposition from its Communist allies.

It is no coincidence, defence experts say, that Gates’ visit, which New Delhi says is due on Tuesday, comes just before a 3 March deadline for bids on the contract for 126 fighters.

“The clinching factor on this deal may be politics, which is why Gates is coming," said security expert Ashok Mehta. “If you don’t get the 123 deal, then a 126 deal would signify a real turn in relations with the United States."

Closer ties have already reaped some benefits for US business, including India’s decision this year to buy six C-130J military transport planes from Lockheed worth about $1 billion.

Defence experts said it was one of India’s biggest arms deals with the US since the country’s independence from Britain in 1947 and heralded New Delhi’s shift towards being less dependent on Russia for military supplies.

“Defence ties form a significant part of the overall spectrum of the relationship with India. The relationship is broader than the civilian nuclear arrangement," said a senior US defence official travelling with Gates.

Lockheed Martin’s president South Asia, Richard Kirkland, said this week in Singapore that India could be the largest defence market in Asia with $20 billion in possible air force, navy and communications contracts over the next decade.

Russia still accounts for about 80% of India’s foreign military supplies, according to Mehta. “India no longer wants its military eggs all in one basket," he said.

New Delhi and Washington’s closeness hinges on a desire not only for more business but also to counterbalance China’s rise. Last year, for example, the Indian Navy carried out one of its largest military exercises with the US in the Bay of Bengal, along with Japan, Australia and Singapore.

A government official would not say what the two sides would discuss next week, but said that Gates would meet defence minister A.K. Antony.

Analysts said Gates could probably do little to push India to agree to the nuclear deal. Under the accord, India could import US nuclear fuel and reactors.

It could reap huge rewards for US businesses. But the Leftists that the governing coalition relies on for parliamentary support opposed it, and Prime Minister Manmohan Singh signalled last year he would not risk a snap election to push the deal through.

US officials warned this month that time was running out to push the deal through under the Bush administration, and said India might never get the chance for such a deal again. “There is nothing the Americans can do about it," said Mohan. “It’s up to India to make a political decision to go ahead."

Jan Dahinte in Singapore and Kristin Roberts in Washington contributed to this story.