How Supreme Court chooses the Chief Justice of India

DY Chandrachud will become the Chief Justice of India in 2022. Here's a look at how age plays a key role in such appointments

Supreme Court judge Dhananjaya Y. Chandrachud, who was elevated to the apex court on Friday from the Allahabad high court where he was the chief justice, was born on 11 November 1959.

That makes him 56 years, six months and a few days young, and young he is for a Supreme Court judge.

In judicial circles, your birthday is important.

For one, as in many other jobs too, it determines your retirement age.

Supreme Court judges all have to retire at age 65, which means that justice Chandrachud will sit on the apex court bench longer than most: until 10 November 2024.

This will also be fundamental to him being the chief justice of India (CJI) one day in an elaborate and complex system that has evolved by convention as much as not.

By convention, the outgoing Chief Justice of India selects the most senior then-sitting Supreme Court judge.

Seniority at the apex court is determined not by age, but by:

1. The date a judge was appointed to the Supreme Court.

2. If two judges are elevated to the Supreme Court on the same day,

a) the one who was sworn in first as a judge would trump another;

b) if both were sworn in as judges on the same day, the one with more years of high court service would ‘win’ in the seniority stakes; 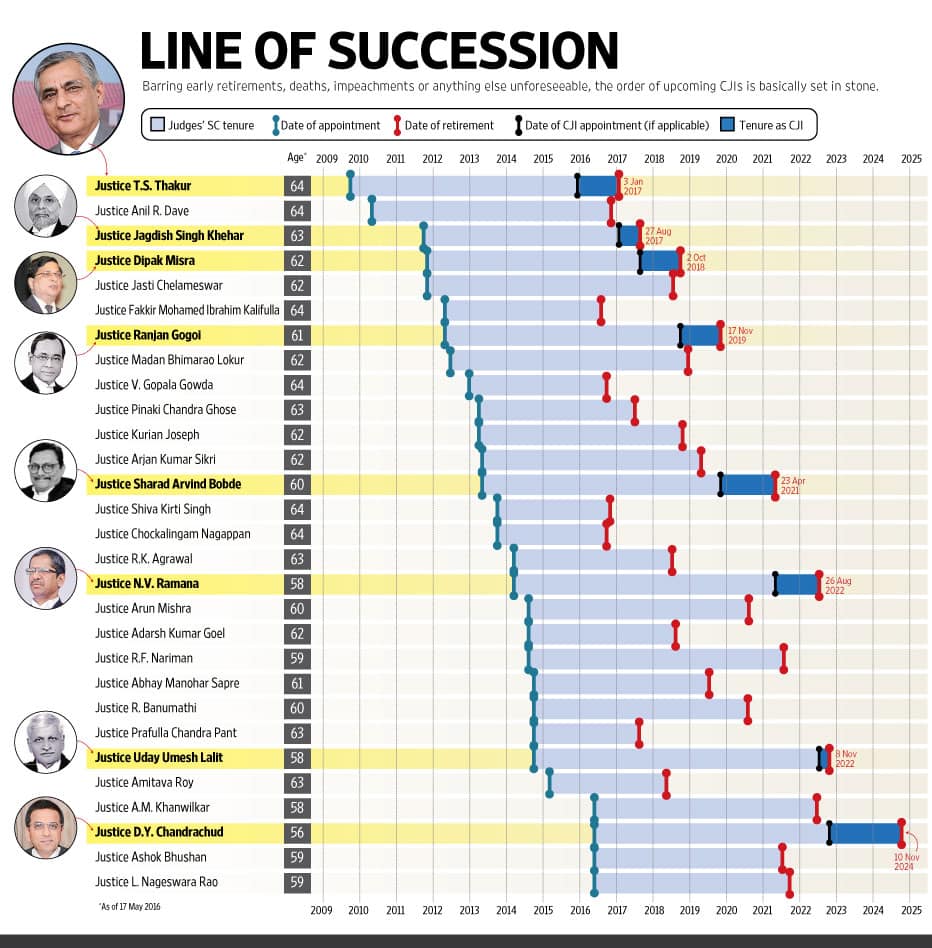 These tie-breakers aren’t just theoretical though—justice Ruma Pal was pipped to the Chief Justice of India’s post by justice Y.K. Sabharwal, who in 2000 was sworn in at the Supreme Court a few hours before her on the same day.

And justice A.S. Ahmadi became the Chief Justice of India in 1994 instead of justice Kuldip Singh, both appointed to the apex court on the same day in 1988, due to Singh having come from the bar, and Ahmadi therefore having been a judge for longer.

Therefore, barring early retirements, deaths, impeachments or anything else unforeseeable, the order of upcoming Chief Justices of India is basically set in stone.

Interestingly, these rules aren’t really written down anywhere but are a matter of judicial ‘convention’.

What will happen now?

—Justice J.S. Khehar, who will hold the Chief Justice of India’s office until 27 August 2017, at which point

—Justice Dipak Misra will take over until 2 October 2018, followed by

—Justice Ranjan Gogoi until 17 November 2019, followed by a longer term for

—Justice Sharad Arvind Bobde until 23 April 2021; he will be succeeded by

—Justice N.V. Ramana until 26 August 2022, after which there will be a micro-stint by

—Justice U.U. Lalit until 8 November 2022, at which point the reign will start of

—Justice Chandrachud, for just under two years, until 10 November 2024.

Many Supreme Court judges will not get a stab at CJI-ship, of course, through no fault of their own.

The other Supreme Court judges appointed with Chandrachud, for instance, will all have retired before their senior brother judge, Lalit, retires as Chief Justice of India on 8 November 2022: justice Ashok Bhushan will reach retirement on 4 July 2021, justice L. Nageswara Rao will retire on 1 September 2021, and justice A.M. Khanwilkar on 29 July 2022.

But let us wish them well, thank them and remember them.

But their service to the country should be as welcome and as appreciated.