Thanks for Visiting Mint
You seem to have an Ad Blocker on. Please turn it off in order to continue, or whitelist Mint
HOW TO TURN OFF AD BLOCKER
OR
REFRESH IF YOU ALREADY TURNED OFF THE AD BLOCKER
Home >Politics >News >Microlenders struggle for survival despite debt recast

Mumbai: The crisis that hit the Indian microfinance industry in late 2010 continues to take its toll on the sector.

Leading microfinance institutions (MFIs) in Andhra Pradesh that were admitted to the corporate debt restructuring (CDR) process last year are struggling to stay afloat as loan recovery remains poor and banks refuse to lend to the sector. 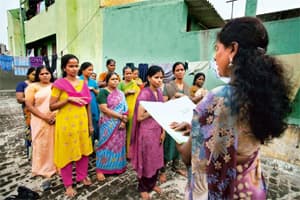 Hard times: MFIs in Andhra Pradesh have approached banks with a proposal to set up a special purpose vehicle to transfer all their bad loans to the new entity.(Ganesh/Mint)

The situation worsened when most MFIs had to resume repayments to banks from their limited cash flows, after a year-long moratorium given by the lenders ended in April.

Under the loan recast, banks offered a one-year moratorium and a 1 percentage point cut in interest rates on loans. Banks agreed to restructure loans after the Reserve Bank of India (RBI) allowed banks to do so without classifying them as bad loans.

MFIs that plunged into a crisis in 2010 show few signs of being able to survive in the long term. Dinesh Unnikrishnan tells us more

Typically, banks need to set aside more money for such loans, which impacts their profitability.

The chances of survival for these companies beyond the short-term are low in the absence of fresh funding and an improvement in loan recovery, analysts said.

These MFIs have more than 50% loan exposure to Andhra Pradesh.

“Even if anyone wants to pull them out, there is no guarantee that these companies will come out of crisis given the current situation in Andhra Pradesh," said Santosh Singh, analyst at Mumbai-based Espirito Santo Securities India Pvt. Ltd. “I do not see a future for these MFIs, unless the situation improves dramatically."

According to Singh, these firms can survive only if banks convert their loans to equity and RBI relaxes norms related to provisions to cover bad loans in Andhra Pradesh.

While a relaxation from the apex bank is widely expected, commercial banks are reluctant to convert their loans to equity or offer fresh funds fearing they will have to take a further hit on their exposure.

As a last-ditch effort to stay afloat, Andhra Pradesh-based MFIs under CDR have now approached banks with a proposal to set up a common special purpose vehicle (SPV) to transfer all their bad loans to the new entity and thus clean up their balance sheets. Banks have asked MFIs to submit a detailed proposal on the plan, said Padmaja Reddy, founder and managing director, Spandana Sphoorty Financial Ltd. Though this will enable MFIs to raise fresh funding from banks and private investors, the plan will work out only if lenders also agree to transfer their corresponding liabilities to the SPV.

“Banks have asked us to submit a plan in one or two weeks. Once it is done, banks and MFIs will together work out a plan to recover the bad assets," Reddy said.

But the situation could take a turn for the worse “if banks do not accept our proposal for equity conversion or SPV model and refuse fresh funding," Reddy said.

Bankers, however, said they will have to thoroughly examine the SPV proposal before taking a call.

Puli Kishore Kumar, promoter and chief executive officer of Trident Microfin, said the company is discussing the proposal with banks.

Among the companies whose debt was recast, Trident is the only one that had its loans converted to equity. Banks hold 68% of Trident, which had a loan book of ₹ 140 crore in March.

“We do not foresee (any) immediate liquidity issue. However, without fresh funding, even the performing book outside Andhra Pradesh will start shrinking," Kumar said.

On the SPV plan, Udaia Kumar said the firm was “looking at different options towards consolidating its Andhra Pradesh and non-Andhra Pradesh portfolios to come out of the disaster."

Its loan book declined to ₹ 1,974 crore at end March, from ₹ 2,066 crore a year ago. Asmitha could not be reached despite repeated attempts.

After a phase of rapid growth, Indian MFIs faced a crisis in October 2010 when India’s fifth-largest state, Andhra Pradesh, put in place a law to rein in microlenders. This was after a series of suicides reported in the state due to alleged coercion by some MFIs over recovering loan instalments.

The law prohibited MFIs from doing doorstep business and collecting money from borrowers on a daily or weekly basis—the basic operational model of MFIs. It also made it mandatory for these firms to secure government approval on every second loan given to the same borrower.

Following this, the repayment rate of borrowers fell to less than 5% in the state, forcing MFIs to stop fresh lending to borrowers. More importantly, banks also stopped lending to MFIs.

The crisis severely hit most of the microlenders in the southern state including the country’s lone listed microlender, SKS Microfinance Ltd, the shares of which plunged 93.56% since their peak on 28 September 2010. On Tuesday, SKS shares gained 0.06% to close at ₹ 90.3 on BSE, while the Sensex gained 0.24%.

Other MFIs also felt the heat. Spandana’s overall loan book shrunk to about ₹ 2,400 crore from about ₹ 4,000 crore before the crisis and Andhra Pradesh’s share rose to 60% from 50%.

Going ahead, the improving regulatory situation may prompt banks to improve funding to the sector, senior bankers said.

But not all lenders seem to share this view as fresh fund flows to the sector remain low.

“There will be a gradual opening up of funds to the sector as the scenario is seemingly improving and the outlook is better than what it was before," said the head of the microfinance division at a private sector bank. He didn’t want to be named.

Early last year, RBI issued regulations to govern NBFC-MFIs based on the recommendations of the Malegam panel. It capped the interest rate MFIs can charge borrowers at 26% and margin at 12%. NBFCs are non-banking finance companies.

For its part, the government is in the process of passing a national regulation for MFIs that will supersede all state-level regulations on the sector.