Chandigarh: A proposal by the Haryana government to form a separate committee to manage historical gurdwaras, or Sikh shrines, is shaping into an interstate dispute mixing religion and politics, a potentially dangerous cocktail.

Critics warn that the row between Haryana and Punjab could escalate into a crisis similar to the one centred on the Amarnath shrine in Kashmir. A Haryana government committee that studied the proposal is expected to release its report this week.

The government of Punjab is staunchly opposed to the plan which, if implemented, will dilute the authority of the powerful Shiromani Gurdwara Prabandhak Committee, or SGPC, which administers and manages gurdwaras in the states of Punjab, Haryana, Himachal Pradesh and union territory of Chandigarh.

The Haryana chapter of the Congress party has backed the move, while the Bharatiya Janata Party-led National Democratic Alliance, or NDA, has joined forces with the Badal faction of the Shiromani Akali Dal (SAD) that governs Punjab to resist it.

The Congress, which rules Haryana, says the formation of a committee to manage historical gurdwaras is in line with demands by Sikhs in the state and with its election manifesto for the 2005 assembly polls. The Punjab government says it violates the Sikh Gurdwara Act of 1925. 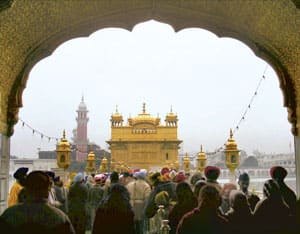 Of the 170 elected members of SGPC, 157 are from Punjab. Haryana’s agriculture minister Harmohinder Singh Chatha, who heads the committee that studied the demand, says a majority of the affidavits submitted to the panel by Sikhs in the state supported the formation of a separate body to oversee gurdwaras in the state.

Jagdish Singh Jhinda, who leads a campaign in support of such a body, says that it is the right of the Haryana Sikhs to manage and administer their own gurdwaras.

Supporting their stance is Harcharan Singh Josh, member of National Commission for Minorities. “Sikhs in Haryana should be allowed to elect their representatives for management of gurdwaras in the state," Josh says.

SGPC maintains that the Sikh Gurdwara Act of 1925 was passed by the British and it managed all gurdwaras in the undivided Punjab before partition. Even gurdwaras in Pakistan were under its purview during British rule, and Haryana cannot unilaterally overule an Act applicable in three states and a Union territory, it says.

SGPC also counters the claim of Haryana Sikhs that it does not spend enough money on gurdwaras in Haryana. While gurdwaras in Haryana earned Rs14.63 lakh last year, SGPC spent Rs27.88 lakh in the state, an SGPC spokesperson said. SAD president Sukhbir Singh Badal draws a parallel with the situation in Jammu and Kashmir. The country can “do without another trouble spot in Punjab along the lines of J and K", he said.