GST slabs to be unveiled in 15 days, says Dasgupta

GST slabs to be unveiled in 15 days, says Dasgupta

Kolkata: The goods and services tax (GST) will have four slabs, and they are likely to be unveiled within 15 days, chairman of empowered committee of state finance ministers and West Bengal’s finance minister Asim Dasgupta said on Sunday.

“It (GST) will have four slabs. I hope the rates will be released in the next 15 days," Dasgupta said. 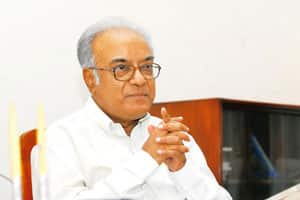 Plans ahead: Asim dasgupta, chairman of the empowered committee of state finance ministers. The GST will have four slabs. Indranil Bhoumik / Mint

Precious metals are likely to continue to attract 1% tax. This has to be done to bring uniformity in tax compliance for the business community and to facilitate it to maintain only a single book of accounts for both state GST and Central GST tax payment, Dasgupta said. The implementation of GST is scheduled for 1 April. However, there are doubts in various quarters whether the new tax regime would come into effect on the targeted date because of differences of opinion over the rates and the items to be included under GST.

The empowered committee of state finance ministers had released a discussion paper on GST on 10 November.

It proposes to replace Central levies such as excise duty, service tax, special additional duty and countervailing duty with GST.