New Delhi: Prime Minister Narendra Modi on Tuesday promised to ensure that 99% of items attract goods and services tax (GST) at 18% or lower, leaving sin or luxury items only to be taxed at the highest rate of 28%.

Speaking at the Republic Summit in Mumbai, Modi said he had given his suggestions to the federal indirect tax body, the GST Council, which is set to meet in New Delhi on Saturday. Modi’s promise would require cutting tax rates on about 25 categories to 18% or lower from 28%. Currently, 39 of the around 1,378 tariff categories are taxed at 28%.

Modi’s suggestion to the council on tax rate reduction comes at a time when indirect tax collections have lagged the monthly average of ₹ 1 trillion required for this fiscal to meet revenue targets of Union and state governments. 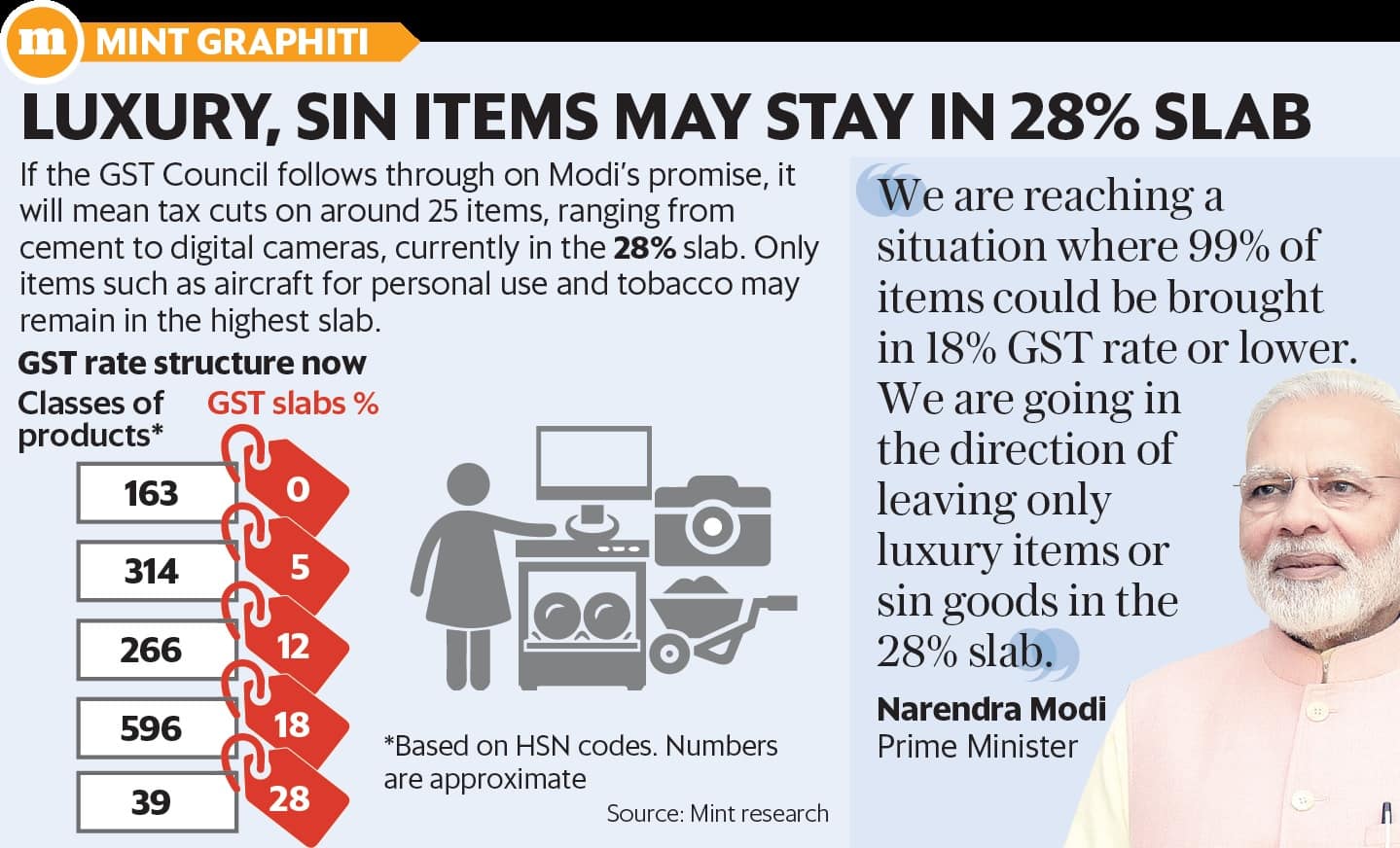 “Bringing more products under the 18% slab could help in reducing the number of slabs in future, but one could anticipate short-term headwinds on revenue collections," said M.S. Mani, partner, Deloitte India.

If the GST Council does clear the tax cuts, it will be the biggest reduction since July, when the federal body slashed tax rates on 14 product categories from 28%, most of them to 18%, besides abolishing GST on items such as sanitary napkins.

“GST has given the society and entrepreneurs a simple and efficient tax system free of inspector raj. Broad-based consultations have led to changes in GST over time. Today, it is settled to a large extent. We are reaching a situation where 99% of items could be brought in 18% GST rate or lower. We are going in the direction of leaving only luxury items or sin goods in the 28% slab," said the Prime Minister.

A government official, who asked not to be named, said the GST Council would also consider requests received from various state governments for tax changes on items of local interest.

Modi’s assurance of tax cuts comes in the wake of the opposition Congress winning in three of the five states that went to assembly polls recently, indicating that the national elections early next year may not be an easy battle for the National Democratic Alliance led by him.

“The political dynamics and the priority of the council are fast changing," said the official cited earlier.

The highest slab of 28% was originally envisaged only for a few luxury and sin products, but was made applicable to several other items. According to experts, the pruning of this slab is desirable for the manufacturing sector. “While rates of many of these products have since been reduced first in November 2017 and then in July this year, the 28% slab still includes products such as cameras, auto components, cement, etc," said Pratik Jain, partner and leader of indirect tax at PwC India. “From a policy standpoint, it will be good if this category is limited to only a few select products and it will be interesting to see if the GST Council takes this decision in the upcoming meeting."

Modi said that since the rollout of GST in July 2017, 5.5 million new businesses had registered as new taxpayers, adding that his government was promoting economic growth through faster construction of roads and airports and by reviving stalled projects. “Governance is driven by predictable and transparent policies," said Modi.