New Delhi: At least 930 million workers in the Asia-Pacific region, including India, are facing vulnerable employment, the International Labour Organization (ILO) said on Friday in a report that urges economies to improve the quality of jobs.

There is no country-specific break-up of this number, but on an average 48.6% of workers in this region feel vulnerable and the trend will grow marginally to 49% by 2020, the ILO said. This means almost one in every two workers are facing uncertainty at work, including low wage and less conducive working conditions, despite impressive economic growth in the region over the last one-and-a-half decades.

“The high-income countries in the region and some of the larger middle-income countries, such as China, India and Indonesia, are now experiencing a growing disconnect between growth and inclusiveness," the ILO said in its report titled Asia Pacific Employment and Social Outlook 2018.

Around 41% of Indian employees feel they are poorly paid, a figure that is the fourth worst among the 22 countries of the region, trailed only by Bangladesh, Pakistan and Mongolia, according to the report, which has used 2013 data for this comparison. Workers in Hong Kong, Australia and Thailand are the least low-paid employees in the region, said ILO. 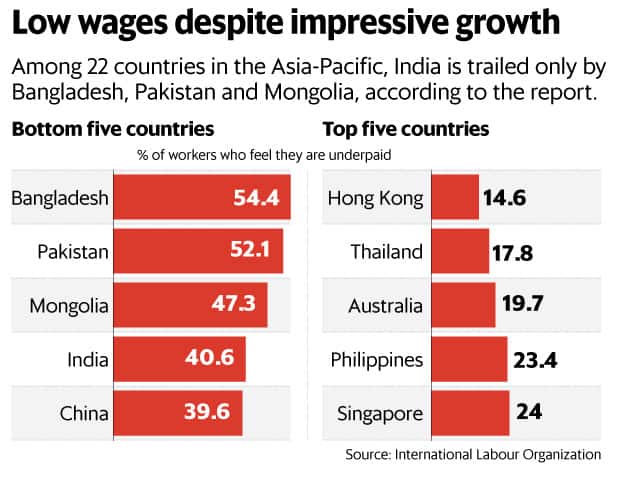 All South Asian countries show a low female labour force participation rate with the exception of Nepal, which stands out with a high rate of 79.3% in 2008 (its latest Labour Force Survey year), according to the report. In contrast, India’s female LFPR (labour force participation rate) of 26.2% in 2011–12 slumped from 32.6% in 2004–05, “despite the country’s strong economic growth".

The global labour body also underlined that low social security penetration is limiting workers’ fallback options post retirement or in case of job loss. It attributed higher informality in the labour market as the prime reason for this low penetration.

“The range of persons with social protection coverage among the countries runs from a high of 72% in Mongolia to 19% in India, with most countries falling near the lower end of the scale. Challenges to universal coverage in the region relate to the high prevalence of informal employment among some countries," the report said.

In Asia-Pacific, people aged 65 or older represent 7.8% of the total population. Yet, social protection expenditure on pensions and other old-age benefits was 5.1% of gross domestic product on average, ILO said.

“The regional heterogeneity continues with regards to long-term care expenditures for those aged 65 and older. In 2013, India spent on average $99.4 at PPP (purchasing power parity) per person while Japan spent $994.1 at PPP and the Republic of Korea as much as $7,945 at PPP per person," it added.

India’s problem is higher informality, as well as poor quality and low paid jobs in the formal sector, said K.R. Shyam Sundar, a labour economist and professor at XLRI Jamshedpur. While the gradual growth in the formal sector’s share in the labour market is a good sign, the government has to put in place systems which will improve the quality of jobs, he said. Short-term contractual employment in the formal sector or in labour intensive sectors will not help, he said.