Will courts regulate the media?

Will courts regulate the media?

New Delhi: On the morning of 10 August 2011, senior lawyer Harish Salve looked upset as he entered Chief Justice of India (CJI) S.H. Kapadia’s courtroom, holding a newspaper that had published an article on a case he was arguing in the Supreme Court.

Salve complained that the article in question, written by a journalist at news agency Press Trust of India (PTI), had misquoted him in reporting on arguments he made the previous two days in the Vodafone Group Plc. tax case. Salve was arguing why Indian income-tax authorities should not be allowed to tax the British telecom company for its 2007 acquisition of Hutchison Whampoa Ltd’s Indian operations. 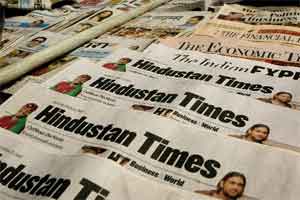 The inaccuracy became the cause of one in a string of incidents pitting the legal community against the media over the reporting of court hearings.

In constitutional democracies, courts and the press are usually seen as working together to ensure probity and accountability in public life. These stray instances have caused friction between the two institutions in India. Does “trial by media" truly exist as a phenomenon, and if so, do the courts have the power under the Constitution to rein in the media are the questions being debated.

In the above instance, the judges asked PTI to respond to Salve’s application, which he made to the court on Chief Justice Kapadia’s direction. Eventually, an unconditional apology was tendered on the news organization’s behalf.

A senior PTI editor, speaking on condition of anonymity, said the journalist who wrote the report was taken off the Supreme Court beat.

“The media has its own internal checks and balances. It’s not only in SC," the editor said. “If a reporter on any other beat makes a mistake, he or she will be held accountable." When it comes to reporting on Supreme Court cases, the news agency is “extra careful," he said, “but unfortunately, sometimes errors do happen".

Reporters face their own difficulties. Unlike in the US or the UK, there are no transcripts, recordings or live broadcasts of hearings nor are proceedings in crowded courtrooms properly audible, he said.

According to CJI Kapadia, he has personally received 11-13 such complaints from senior lawyers about wrong reporting of cases. He said he also regularly receives letters from undertrials in criminal cases who claim to have been condemned by newspapers or on television.

“The Chief Justice receives letter after letter that our rights are affected. How can I keep ignoring (them)? Till when can I ignore (them)?" asked Kapadia on a morning in late March, as he sat on a constitution bench of five judges, brought together to frame guidelines for the media’s reportage of court proceedings. The court has not made these complaints or the letters public.

The ongoing constitutional bench hearing was born out of lawyer Fali S. Nariman’s complaint to Kapadia’s court on 10 February. Nariman, who was representing two Sahara real estate companies facing action from the stock market regulator Securities and Exchange Board of India (Sebi), complained to the court about a confidential proposal that had made its way onto a business news channel.

“We are distressed that even the without-prejudice proposal submitted by the petitioners to Sebi has come on CNBC-TV18. Such incidents are increasing by the day. Such reporting not only affects business sentiments, it also affects administration of justice," the court said in a written order.

Nariman was called upon to assist the court’s constitution bench on press freedom and court reporting. Also assisting the court is senior lawyer K.K. Venugopal who was asked to do so by CJI Kapadia. Venugopal had complained against the media to the court before Salve did so.

During the hearing of the P.J. Thomas case in last January, where the government faced a petition for appointing an officer with a chargesheet against him to the position of central vigilance commissioner (CVC), media interest was understandably at its peak because of potential embarrassment to the government as a result of the case. Reporters swarmed the visitors’ gallery of the courtroom.

Venugopal submitted that while the chargesheet was in a criminal case under the Prevention of Corruption Act, his client was the victim of a political battle in Kerala.

Later that night, Arnab Goswami, editor-in-chief of Times Now news channel, told his viewers that he found Venugopal’s submissions to the court to be “absurd".

Venugopal entered court the next day and complained. Kapadia asked him to make a written complaint against Times Now and Goswami, which Venugopal did not do after Goswami apologized, according to lawyers in Venugopal’s chambers.

Contacted late Monday evening, Goswami said he wasn’t in a position to comment because he was preparing for his daily news show.

The bench, in circumstances of wrong reporting, has been largely sympathetic to lawyers. It has not held back in telling the media how to do its job. Justice G.S. Singhvi would routinely address correspondents in open court on most afternoons when the 2G spectrum cases were being heard. He would conclude by asking reporters to report the proceedings properly.

Previously, Kapadia had expressed displeasure at a 15 December, 2010, news report in a national daily that said the judiciary wanted to retain 1% of the 2,500 crore deposit made by Vodafone in the court’s registry in the tax case. The report said a “cash-starved" judiciary was trying to source funds through such “novel" methods. Kapadia had then said: “People write whatever they want." But the court did not initiate any action against the reporter or the newspaper.

Last August, when the incorrect reporting of the Vodafone case occurred, Kapadia had suggested passing directions or guidelines for media coverage of the court proceedings. “We will pass a short order. But you (the press) have to regulate. This is not the first time it has happened. All over several wrong reports are appearing. It has happened in other courts also," said the judge.

“We don’t want these recurrences in a sub judice matter," he said.

The court also raised the issue of eligibility criteria for journalists during this period. Essentially, both rookie reporters and senior accredited correspondents had been expected to have a law degree to report from the Supreme Court. But these were subsequently rolled back after representations from correspondents to the court’s press committee that it would be unreasonable for the court to impose these.

More recently, after the Vodafone judgement in January, Kapadia was targeted through a public interest litigation (it was later dismissed as “frivolous" with heavy costs) which claimed that the CJI had a conflict of interest in the Vodafone case because his son worked with Ernst and Young. The consultancy had advised Vodafone on the transaction with Hutchison.

Interestingly, the CJI raised this very question during the constitutional bench hearing. When told that India had principally adopted a system of open justice, Kapadia said: “We are not on open justice. We are on what goes on in a trial court. A petition is filed. The press is reporting. It is analysed. Is it not prejudging the issue?"

Dhavan told the judges that they didn’t have the power to do what they were contemplating—muzzle the media with guidelines that could be enforced. This amounted to legislating, he said.

Nariman, who had filed the complaint, told the court that such guidelines could not be enforceable nor would they be punitive. It would upset the constitutional balance among free speech, limits on free speech and the rights of an undertrial, said Nairman.

The court was also told that the existing remedies of contempt and defamation acted as sufficient checks against a wavering press.

Whether the constitutional bench agrees with him will be known in some weeks after the hearing concludes. The hearing resumes on Tuesday.