Businessmen announce investments of Rs4.5 trillion, hires of 1.8 million, over the next 5-10 years, mostly in their own businesses

New Delhi: Indian businessmen scrambled to showcase many of their existing investment plans and allocations as a response to Prime Minister Narendra Modi’s Digital India initiative, which was launched on Wednesday. By the end of the day, they had announced planned investments of ₹ 4.5 trillion, and hires of 1.8 million people, over the next 5-10 years.

The numbers sound highly laudable, but are mostly investments in their own businesses, experts said.

Still there is no doubt that their enthusiasm—Microsoft Corp.’s Satya Nadella sent a video message on the campaign—will translate into achieving many of the objectives of Digital India, albeit in a market-centric way.

“This would have happened any which ways. Over the last 10 years, there has been a significant growth bottleneck and many of the companies have shied away from spending as much as they should have. The industry has now come to a point where they have to put in this much. The telcos will anyway have to spend this much on spectrum and other networks over the next decade," said a partner at a leading consulting firm who spoke on condition of anonymity. 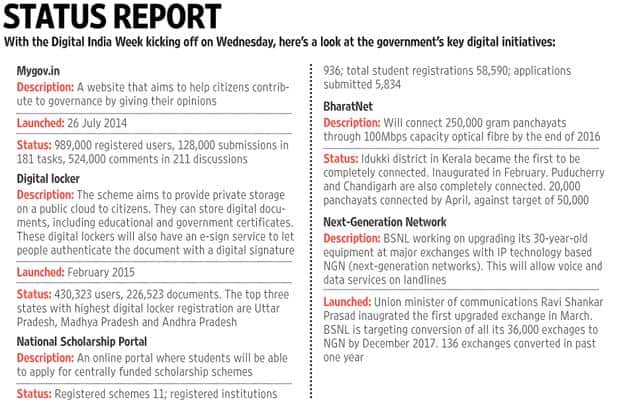 The statements were made at the launch event of Digital India, an umbrella scheme that includes providing Internet access to all by creating digital infrastructure, delivering government services on the Web and mobile on-demand, and promoting digital literacy.

Mukesh Ambani committed an investment of ₹ 2.5 trillion towards the scheme.

“We at Reliance will invest over ₹ 2,50,000 crore across the Digital India pillars. Firstly, in terms of infrastructure, we are rolling out an all IP (Internet Protocol) Next-Generation, wireless broadband infrastructure across all the 29 states in India. Secondly, Jio is setting up a new nationwide distribution network that will enable over a 150,000 small electronic retailers to sell and service smartphones and Internet devices," said Ambani, referring to Reliance Jio Infocomm Ltd, which is expected to roll out 4G-based high-speed data communications services by the end of this year.

Next came Mistry, who said that Tata group firm Tata Consultancy Services Ltd (TCS) had been part of the government’s digitization initiative with e-passport sewa and electronic income-tax returns filing. In addition, he said that TCS was hiring 60,000 people this fiscal year.

“At the Aditya Birla Group, we have been involved in Digital India in several ways. First, we forayed into the telecom sector more than 20 years ago. Our investments in the telecom sector have been in excess of $15 billion, wherein we have laid 100,000km of fibre and have a network of over 150,000 cell sites. To further improve this digital infrastructure, we plan to invest additional $7 billion in areas such as network roll-out and enhancement, broadband implementation and Wi-Fi deployment over the next five years," Birla said. “We have plans to invest over $2 billion over next five years on the projects falling within the ambit of the Digital India initiative such as electronics manufacturing, energy storage, Internet of Things and smart cities."

He also mentioned a 100-acre digital township that the group was building in a Mumbai suburb.

The event, with an estimated 10,000 people in attendance at the Indira Gandhi Indoor Stadium in Delhi, did not see any presence from major global technology companies such as Qualcomm Inc., Foxconn and Google Inc., among others.

On Saturday, in a press conference announcing Wednesday’s event, communications minister Ravi Shankar Prasad said the government had approached them, but they had declined to participate. “They have given compelling reasons why they could not make it. But they remain engaged with us (the government) on participating this initiative of ours," Prasad had said.

Still, there is no doubt that the plans announced will translate into achieving many of the objectives of Digital India.

“It is an absolutely brilliant idea to aggregate all the industry investments into this Digital India platform and create this overarching platform to showcase the involvement. With the bellwether companies announcing such plans, the smaller companies would also be encouraged to spend, with the confidence boost," said Jaijit Bhattacharya, a partner at KPMG.

Bharti Airtel Ltd chairman Sunil Bharti Mittal said the company was committed to spending in excess of ₹ 1 trillion in the next five years, money that will go towards building additional infrastructure and taking 4G to the masses, among other things.

Anil Agarwal, chairman of Vedanta Resources Plc and Sterlite Technologies Ltd, showed his commitment by saying Sterlite plans to manufacture LCD panels in India entailing an investments of ₹ 40,000 crore. This will provide employment opportunities to 50,000 people and cut down electronic imports worth ₹ 20,000 crore.

In a YouTube message, Microsoft’s Nadella said: “Microsoft is proud to be a part of Digital India launch and believe that technology can uniquely support the government’s initiatives in key areas including: rural Internet connectivity, digital cloud services for all its citizens, and communications and productivity services for the government." The company plans to offer cloud services to local data centres in India.