Beijing: A year ago, Catherine Liu employed more than 2,000 people at her five Shanghai luggage-making factories. Now, as the dwindling supply of low-paid young workers forces wages and costs higher, she has 1,200 left.

“Local workers are getting much older," said Liu, owner of Shanghai Worldwide Trading Co. “If you want to train them, they must be young. It’s very difficult to survive."

Aging and shrinking labour pools are also poised to curb expansion across the other so-called Bric nations that contributed almost half of global growth in the past decade. With fewer youths keeping factories going and more pensioners to support in those markets, the world economy is set to slow, Goldman Sachs Group Inc. says. 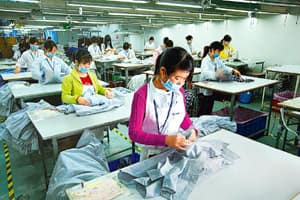 Growth hurdle: Workers at a Lever Style factory in Shenzhen, Guangdong province, China. Ageing and shrinking labour pools are poised to curb expansion across Bric nations that contributed almost half of global growth in the past decade. Bloomberg.

As the Brics slow down, global growth probably will peak at about 4.3% this decade and fall to 3.9% in the 2020s, according a 7 December report by Goldman analysts.

That’s prompting fund managers including Mark Mobius to invest in so-called frontier markets such as Nigeria, Vietnam and Argentina, where average annual growth is set to rise to 5.1% this decade, from about 4.3% in the previous 10 years.

One of his holdings, Nigeria’s Zenith Bank Plc, has risen 11.9% in the past two years, while the MSCI Emerging- Markets Index is down 7.4%.

“These four countries could be in the Top 10 contributors to global GDP this decade, adding well over $2 trillion," London-based O’Neill said in an e-mailed response to questions on 29 December. With large young populations, these countries could become powerful growth stories.

While Goldman started its N-11 fund in February covering the Next Eleven emerging nations to benefit from superior growth potential, O’Neill said the size of the Brics economies means they will remain “the most dominant and positive force in the world economy."

Together, Brazil, Russia, India and China account for about 25% of world gross domestic product, according to Goldman.

O’Neill’s company predicts that the average annual expansion of the Bric countries will fall during this decade to 6.9% from 7.9% in the 10 years to 2009, then drop to 5.3% in the 2020s. “In terms of the role of the Brics in driving global growth, the most dramatic change is behind us," the Goldman analysts, led by Dominic Wilson in London, wrote in a 7 December note.

Already, the demographic volte-face has prompted calls for China to end its one-child policy, which exacerbated the drop in workers since its implementation in 1979; and has forced legislation in Brazil to control the cost of public-service pensions.

In Russia, a shortage of qualified middle-aged workers is being blamed for a crisis in its space programme after failed exploration and satellite launches.

In India, where the working-age population is projected to rise more than a quarter by 2030 to 972 million, illiteracy among more than one-third of workers is preventing the nation from capitalizing on its demographic fortune.

“Financial markets, businesses and policymakers have failed to recognize that demographic realities are creating pressures for slower future growth," said Nicholas Eberstadt, a demographer at the American Enterprise Institute in Washington, who has advised the World Bank.

The shift to a society with a dwindling number of employees funding a growing pension bill is most pronounced in China, the world’s biggest growth engine last year.

“After expanding 2.5% a year over the past three decades, China’s working-age population has almost stopped growing," said Richard Jackson, director of the Global Aging Initiative at the Centre for Strategic and International Studies in Washington. That pool will contract almost 1% a year by the mid-2020s, he said.

The positive contribution that came from an expanding workforce in China will turn negative in 2013, wiping at least half a percentage point off the potential annual growth rate, according to Wang Feng, a director of the Brookings-Tsinghua Centre for Public Policy in Beijing.

“China’s shooting itself in the foot with the one-child policy," said Wang. It needs to think of ways to encourage young couples to have more children.

The shortage of labour has left employers such as Shanghai Worldwide Trading Co.’s Liu with a conundrum. Moving production to a country like Vietnam where wages are lower is too complicated for a small company like hers, with $10 million in annual sales. And relocating to lower-cost regions within China may not help, she said.

“Young inland workers are not like their parents," said Liu in an interview. “They want easier jobs in supermarkets or restaurants. And the surplus of farmers older than 40 don’t want to work in factories or would need months of expensive training," she said.

In Russia, the number of people aged 65 or more as a proportion of those aged 20 to 64—known as the old-age dependency ratio—will rise to 45% by 2050, from about 20% in 2000, the Paris-based Organization for Economic Cooperation and Development (OECD) said in a 12 December report.

While that’s in line with the change forecast across OECD economies, the causes are different, the report said. Russia has a declining working-age population because both life expectancy and birth rates are low, rather than because the number of elderly people is increasing.

The country also suffered a brain drain during the 1990s when the economy slumped and public funding stalled for many research programmes. There are more than 100,000 Russian-speaking researchers working or studying outside Russia, Kommersant reported in November, citing an estimate from the Russian-Speaking Academic Science Association.

When fragments of a Meridian satellite rained down in Siberia on 23 December after its Soyuz rocket failed, Vladimir Popovkin, director of the Federal Space Agency, blamed it on a workforce hollowed out by the exodus.

“The industry is in crisis," Popovkin said, according to state-run RIA Novosti. “We need to find a solution and to put more trust in young people. There are basically no middle-aged people." Debris from Russia’s failed Mars probe, launched in November, is expected to fall to earth this month.

Russia’s pension fund deficit will double in 2012 to 3% of GDP because of a net increase of about 500,000 retirees and tax cuts, Yury Voronin, a deputy health and social development minister, said in October.

“Who will pay our pensions?" said Farida Kolyulina, 55, a pensioner selling vacuum flasks outside Moscow’s Belorusskaya metro station. “It’s a complete mess. I shouldn’t be working."

“Frontier markets are now in the position that emerging- market countries like the Brics were 20 years ago," said Mobius, who oversees more than $40 billion as executive chairman of Templeton Emerging Markets Group in Hong Kong. “In many cases frontier markets are now in their take-off stage where self-sustaining development is taking place as a result of high consumer spending," said Mobius in an e-mail.

Five of the 20 projected fastest-growing countries last year were in Africa, including Ghana at 13.5%; Eritrea at 8.2%; Ethiopia at 7.5%; and Mozambique at 7.2%, the International Monetary Fund said.

Even as the Brics slow, they may still outpace the developed world over the coming decades, enabling their share of global GDP to rise to almost 40% by 2050, Goldman estimates.

O’Neill’s book The Growth Map, published last month, says the group still has ?rosy prospects. He estimates that even with slower growth, the Brics economies will collectively be bigger than the US by 2015.

“In terms of growth rates, other countries will perhaps grow at a similar fast rate as the Brics, some more," said O’Neill. But they won’t have the same degree of influence on the world economy.

“The Brics have significant scope to offset the intensifying demographic drag," said Markus Jaeger, an economist with Deutsche Bank AG in New York. “They can increase output via urbanization and greater labour force participation or by moving up the technological ladder," he said.

Five of the world’s 10 biggest economies—Japan, Germany, France, Italy and Canada—have elderly dependency ratios that are among the highest in the world, boosting their own healthcare and pension claims.

The growth of Brazil’s working-age population contributed 44% of its economic gain in the decade to 2010, according to Amlan Roy, head of global demographics and pension research at Credit Suisse Group AG in London.

The ballooning cost of paying retirees has made legislation to limit the share of public service pensions a top priority for President Dilma Rousseff’s government. Social security minister Garibaldi Alves says the nation’s pension deficit is rising at 10% a year in a country where civil servants account for almost 20% of all jobs.

The demographic standout among the Brics is India. Its working-age population will rise 117 million by 2020 and 98 million more the following decade, according to UN data.

That may still not be enough for the South Asian nation to emulate the industrial development that transformed China into the world’s second biggest economy. Fewer than half of Indians in their 20s completed secondary education and 37% of adults are illiterate, according to Jackson at Center for Strategic and International Studies.

For Vinod Sharma, who runs Deki Electronics Ltd. in Noida, on the outskirts of New Delhi, the growing ranks available for work are of little help.

“We are demographically well placed but scratch the surface and you will find 100 million people looking for a job," said Sharma, who employs about 500 people to make parts for TVs and fluorescent lights. “You have the numbers but not the right skills. I simply can’t find trained people."

Sharma said government training programmes aren’t geared to new industries and his company has to hire unskilled staff and teach them in-house to solder components and wind capacitors.

“It takes about six months for people our company hires to hit the shop floor," he said. “A person who learns to wind a capacitor becomes reasonably good only after three years."

For China, the demographic shift is happening faster because of the one-child policy.

“Unless China prepares, a retirement crisis of immense proportions looms just over the horizon in the 2020s," said Jackson. On the current course, tens of millions of Chinese are on track to reach old age without pensions, without healthcare, and without family support networks.

The World Bank said a 2005 report that China’s unfunded pension liabilities may be as high as $1.6 trillion. “A subsequent lack of action and rising life expectancy mean that liability is going to be larger now," said Wang of Brookings.

“Our generation is getting old, but the biggest problem has yet to come," said Zhao Meidi, 69, as she walked her grandson home from music school in one of Shanghai’s last undeveloped neighbourhoods. “Look at the generation born after the establishment of the People’s Republic. Who will take care of them?"

Unni Krishnan in New Delhi, Scott Rose in Moscow, Alfred Cang in Shanghai and Maria Rabello in Brasilia contributed to this story.