One nation, one tax as Rajya Sabha clears GST bill

The Rajya Sabha on Wednesday passed the constitution amendment bill for the goods and services tax (GST), setting in motion the process for rolling out the country’s single biggest tax reform.

Once in place, it will, driven by the principle of one nation, one tax, economically unify the country for the first time. It will also further reset federal relations in the country, something finance minister Arun Jaitley described as “pooled sovereignty".

“We continue to work with all parties & states to introduce a system that benefits all Indians & promotes a vibrant & unified national market," Prime Minister Narendra Modi said on Twitter. “I would like to add that GST will also be the best example of cooperative federalism. Together we will take India to new heights of progress."

However, the passage of the constitution amendment bill is a necessary but not sufficient condition for implementation of this ambitious indirect tax reform. While the government is insisting it will adhere to the roll-out deadline of 1 April 2017, many economists and analysts disagree and expect a delay.

Regardless, the passage of the bill burnishes the reformist credentials of the National Democratic Alliance (NDA), particularly Modi. It also does credit to its floor-management skills, given that the NDA is in a minority in the upper House.

GST, a destination-based tax that will subsume various indirect taxes at the central and the state level including excise duty, service tax, value-added tax, entertainment tax and luxury tax, is designed to remove the cascading impact of taxes, bring in efficiency, check tax evasion and expand the tax payer base. It is estimated that implementation of GST will add up to 2% to the country’s gross domestic product and ensure revenue buoyancy.

While there was a near-consensus on this reform, barring opposition from the All India Anna Dravida Munnetra Kazhagam, which walked out during the vote, the near eight-hour debate witnessed a clear attempt by both the Bharatiya Janata Party (BJP), which leads the coalition, and the Congress to claim the reforms legacy of GST.

The debate in the Rajya Sabha revealed the challenges ahead of the government as it proceeds to the next stage of GST implementation—ensuring passage of supporting legislations. While the states, driven by revenue considerations, will be pushing for a higher GST rate, the centre will be seeking to balance the inflationary impact of such a move and strike the right trade-off. 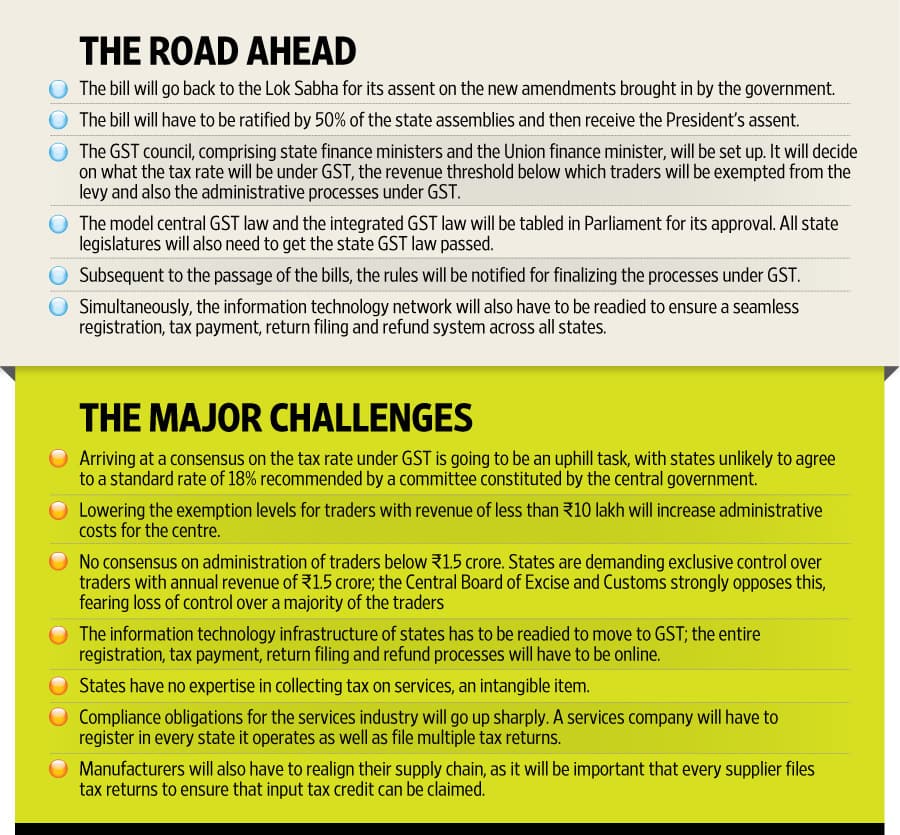 “Passing of GST bill: This is only end of a beginning," revenue secretary Hasmukh Adhia said in a series of tweets. “The real hard work starts now...We will make all attempts to implement GST asap. We are ready with state of art IT design for GST implementation."

Also read: GST: Here are the winners and losers

Replying to the debate, Jaitley indicated that the tax rates under GST are likely to be higher than the 17-19% proposed by a committee under chief economic adviser Arvind Subramanian, raising concerns over the inflationary impact of the tax. The states wanted a higher tax rate than the rate proposed by the central committee, Mint reported on 26 July.

“State finance ministers did not agree with the view in the last meeting of the empowered committee of state finance ministers (that tax rate could be 18%). They wanted a slightly higher rate... they wanted a cushion," he said, adding that states did not agree with the chief economic adviser’s calculations of a 17-19% rate along with some margin for the cesses subsequently introduced in the last two years.

“States said that you are expecting us to bring down rates from 26-28% to less than 20%. States pointed out that they have their commitment with respect to poverty alleviation and social security schemes. The political objective is to try for the most reasonable rate. The rate has to come down," he said.

Consensus also eludes issues such as administrative control over traders with a revenue threshold of less than ₹ 1.5 crore.

Once the bill gets Parliament’s nod, it will have to be ratified by 50% of the states. Subsequently, a GST council will be set up comprising state finance ministers and the Union finance minister which will decide on the rates, threshold and dual control.

Thereafter, two legislations—central GST (CGST) law and integrated GST (IGST) law will have to be passed by the Parliament, probably in the winter session, and a state GST legislation by the state legislatures. These three laws will spell out the fine-print of how GST will be implemented in the country.

Pre-empting the government, major political parties including the Congress, the Communist Party of India (Marxist) (CPM), the Janata Dal (United) and the Samajwadi Party asked the government to commit to not bringing in these supporting legislations as a money bill in an attempt to negate the upper House, where the NDA is in a minority.

Jaitley, however, stopped short of giving a firm assurance that these bill will not be brought in as money bills.

If the government brings in the CGST and IGST as money bills, then the Rajya Sabha cannot vote on these bills. It can only return the bill to the Lok Sabha with its comments.

“The moment is a milestone moment, not only because it gives a constitutional framework, without which the biggest fiscal reform in India would not have been possible, but also because it reflects the convergence of ideas among various states and political parties after 10 long years of continuous discussions and negotiations in a democratic set up," said Girish Vanvari, partner and head of tax, KPMG in India, in a note.

“Starting from the GST bill to be ratified by the State legislatures; to the GST law being framed after considering various typical industry issues; to the roll-out of GSTN; to industry, trade and tax department’s awareness—there is a lot to be done, and the GST roll-out date of 1 April 2017 is not very far," he added.

Sparring over the legacy

Introducing the bill in the Rajya Sabha, Jaitley said, “This is one of the most significant tax reforms in India in recent history. This reform has been debated within the political and economic system of India for almost 15 years," he said. “I am sure the enactment of the GST will bring out the best as far as economic management (goes). It will empower the states. It will increase revenue of the states and the central government. It will provide a boost to the economy. It will bring down tax evasion and eliminate tax on tax," he added.

Striking a conciliatory note at the beginning of the debate, Jaitley said “the proposal was to radically change the taxation structure and the government felt the need for a larger consensus".

Later, addressing concerns about loss of autonomy of the states, Jaitley said, “We are considering a new idea in sovereignty—pooled sovereignty. GST council represents us. Almost every political party which is in power in any state will be directly represented."

Leading the opposition in the debate, Chidambaram acknowledged the conciliation and emphasized the need for consensus on this marquee tax reform initiative.

Both he and Anand Sharma, the other prominent Congress speaker, emphasized that the Congress was the original author of the bill and always favoured the idea of GST, but was opposing some clauses that were not in the nation’s interests. They also tried to position the party as pro-poor and pro-common man, reiterating the need to cap the rates at 18% in the supporting legislations that will follow the constitution amendment bill.

He also pointed out that the GST being an indirect tax should be kept as low as possible, as it impacts everyone, irrespective of their income levels. Citing the report by chief economic adviser Subramanian, Chidambaram pushed for a standard rate of 18% for most goods and services while pushing for the CGST and IGST to not be tabled as money bills.

The constitution amendment bill received Lok Sabha’s nod in May last year but was stuck after the Congress insisted that three of its demands—capping the GST rate in the bill at 18%, doing away with an additional 1% tax, and enabling an independent dispute resolution authority—be incorporated. The government subsequently acceded to the Congress’s demands of removing the 1% tax and changed the language of the dispute resolution clause marginally.

The bill will now go back to the Lok Sabha for its nod to the amendments.

Sitaram Yechury, CPM MP, said an attempt should be made to protect the federal structure of India’s constitution.