On Twitter, Sachin Pilot is CM and Shivraj trumps Modi in MP

Buried in 900,000 tweets of politicians in Madhya Pradesh and Rajasthan are important clues on how the election campaign played out and whatwill follow

Bengaluru: Narendra Modi set the tone in the 2014 national campaign. His message was clear: if you want to hear from me, it doesn’t matter if you are a professional journalist or a casual citizen—come to my rallies or go see what I have to say on Twitter. While the battle on the streets may still be run through machinations and shifting alliances, the media battle has increasingly moved to mobile phones. Social media is no longer just a sounding board, but often doubles up as a strategy chamber where political maneuvers play out in full public view—if one knows how to read it.

In the election-fueled Twitterverse of Rajasthan and Madhya Pradesh (MP), intriguing hints emerge from a large-scale analysis of 900,000 tweets posted during the course of the hectic electioneering season (after 1 September 2018) from the handles of 621 prominent politicians active in those two states— including MPs, MLAs, contesting candidates, and party functionaries.

In Rajasthan, the question of who stood at the center of the Congress story was settled. Sachin Pilot emerged as the key opposition figure at least on Twitter, leaving Ashok Gehlot far behind. In MP, Shivraj Singh Chouhan drowned away any noise about Vyapam or doubts about his supremacy within the party. Data shows that Chouhan achieved the impossible task of usurping Modi’s primacy in an election campaign. Against Chouhan’s dominance on MP’s pre-election Twitterverse, his trio of powerful opponents—Digvijay Singh, Kamal Nath, and Jyotiraditya Singh—looked like marginal players trying to scrape an audience.

The word on the web

To understand politicians’ support from within their own parties, a mapping of the key politicians in Rajasthan and MP was undertaken to visualize who was being talked about, and by whom. Two trends are clear. First, Sachin Pilot is the central figure within the Congress party, getting the most mentions by the party’s official mouthpiece, though Pilot himself does tweet to Gehlot. (See Chart 1) While this may not be indicative of who would come out ahead in a chief ministerial race if the Congress manages to win enough seats, it is an indicator of who is being projected by the state party handle. Interestingly, both got approximately the same number of endorsements from @INCIndia, the Delhi handle of the Congress. We also find that while Sachin Pilot has far fewer followers than Vasundhara Raje, he has much greater success in having messages get retweeted or favorited online.

When the same information is visualized for MP, a rather different picture emerges. BJP’s organized retweeting machine props up the messages of both @BJP4India and @BJP4MP as effectively as any personality in the fray. The dominant personality, however, is Shivraj Chouhan—who comes close to overshadowing Modi. The Congress, on the other hand, unable to make up its mind on one key personality to fall behind (among Digvijay Singh, Kamal Nath, and Scindia) resorted—by default more than strategy—to largely promoting the national handle @INCIndia and the state variant @INCMP.

Another interesting pattern emerges in MP. Despite Chouhan’s clear dominance in terms of following, on average, the tweets of Digvijay Singh, Kamal Nath, and Jyotiraditya Scindia all perform roughly as well as Chouhan, in terms of retweets. However, if we look at the 50 most retweeted, or “most viral" messages to come out of the state’s politicians in the core phase of the campaign since September 2018, only 4 come from non-BJP sources. Chouhan clearly dominates in the ability to get wide attention to the right tweet.

For both parties, the central leader is a key figure in Twitter conversations, irrespective of the importance of state leaders. Narendra Modi has a much greater footprint in his party than Rahul Gandhi has in the INC. This is, in part, because Modi is a relatively prolific participant on social media. What we also see is that the party apparatus is energized to retweet about the leader in both parties. However, the difference between Rajasthan, where there is a greater dependence on Modi, and MP, where Chouhan is the most important social media figure, is an important one. (See Chart 2) The role of the two central leaders in Twitter discourse differs as well. Both the Congress and the BJP leaders in the two states project their respective national leader as vote-getters for the party. However, the two parties’ use of their opponents’ national leader is more nuanced. Congress is critical of Modi primarily for his political choices, and for his role in issues involving prices, agrarian crisis, and demonetization. On the other hand, Rahul Gandhi is criticized in a very different way. He is primarily an object of personal mockery, rather than criticism on policy or political stance. This is a consistent policy of the BJP since the 2014 election, where they criticized Rahul Gandhi for his anointed status, ridiculed him personally for various statements, and attacked his family. This is an important strategy since it focuses the attention on an individual and his characteristics rather than the party and what it may represent. Thus, in Rajasthan, it is Rahul Gandhi who is the central figure of the BJP’s attacks rather than the state leaders. With Vasundhara Raje in a relatively weaker position online than Sachin Pilot, this arguably works to the BJP’s advantage.

The allure of Hindi

Chouhan has often resorted to accessible Hindi, with a clever turn of phrase to take a dig at opponents, to appear more relatable to the average Twitter user. (Chart 4) Many of Scindia’s tweets, on the other hand, would require a fairly nuanced understanding of English. Chouhan’s strategy of using local-language tweets is one that has been used effectively by Modi to present himself as a peoples’ person who can share a joke in common parlance.

The impact of language on the appeal of messages is not entirely clear, however, we find that out of the messages that are widely favorited, there is a greater prevalence of Hindi-language tweets. In Chouhan’s case, this is particularly true, since in MP over 85% of the 10,000 most favorited messages were in Hindi. The key leaders in MP use a lot more Hindi than English in general. With the exception of Digvijay Singh and Jyotiraditya Scindia, all the key politicians in MP have over three-quarters of their tweets in Hindi. In Rajasthan, the use of English is relatively higher, though again, more so by Congress leaders. While almost three-quarters of Vasundhara Raje’s tweets are in Hindi, less than a fifth of the tweets of Ashok Gehlot or CP Joshi uses Hindi. The use of Hindi in tweets is also powerful because of the resonance with street campaigning, which often uses wordplay and turns of phrase to rouse people. Studies have shown that sarcasm and metaphor are very effective in rousing people online. A wide range of issues is represented in the tweets, as would be expected for any electoral season. We mined the most frequent hashtags to get a sense of what politicians are talking about on either side of the campaign.

In Rajasthan, the top hashtag was #RajasthanGauravYatra. While the event was driven by Vasundhara Raje, Amit Shah flagged it off, and a lot of the messaging included references to Narendra Modi. On the other hand, Chouhan maintained centerstage in MP’s comparable Jan Ashirwad Yatra. The second-most used hashtag in Rajasthan was #MannKiBaat, underlining the importance of the prime minister, and positive-toned BJP-driven hashtags like #RisingRajasthan #TransformingIndia, and #SaafNiyatSahiVikas all made it to the top 20 hashtags. The Congress did manage to squeeze in an important hashtag – #RahulGandhi was among the top 10 hashtags in Rajasthan, though we also find that the BJP used it in attack conversations.

The dominance of Chouhan in the hashtags also alludes to the deviation of the MP chief minister from the strict line of the central government to push forth his own agenda. For instance, among his most retweeted tweets was a message that parted ways with the Modi government’s decision to restore some of the more stringent provisions of the SC/ST Act. 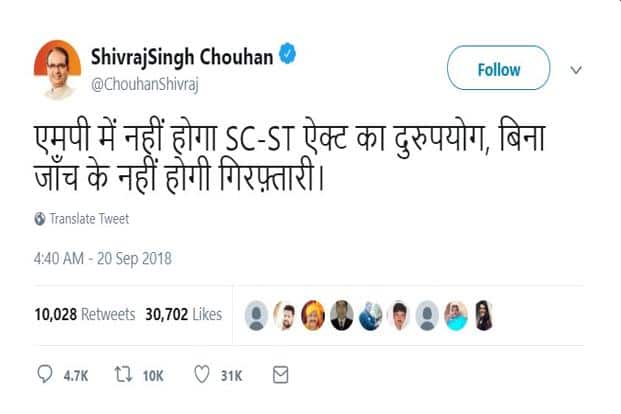 The tweet highlights the importance of caste dynamics in Madhya Pradesh and the difference between what is a publicly acceptable position in the state and at the national stage. Since upper castes and backward castes are a very important constituency in over 140 seats, Chouhan appears to take a position that Modi would typically not at the national stage. What is more interesting is that Scheduled Tribes, in particular, are an important demographic of rural MP, where they represent over a quarter of the electorate. However, social media is tailored towards the urban audience largely. While the Twitter statement holds no technical value as the Act is outside the state’s jurisdiction, it affirms that Chouhan understands the importance of showing that he is his own man. On social media, it’s all about the face that goes with the message.

The view from the other states

An important aspect of India’s political Twitter played out in both Telangana and Chhattisgarh. While social media is disruptive by its nature and often helps even a weakly-resourced opposition, in India, incumbents have a huge advantage because the state and the party are often the same. Since particular political families are often promoted even through official government handles which put out important announcements (unlike in a country like the US where there are ethical guidelines), incumbents in India start with far higher follower counts.

For instance, in Telangana, KT Rama Rao and K Kavitha, the children of the current CM K Chandrashekar Rao, are the most popular on Twitter, with 1.45 million and 717,000 followers, respectively. Their party, the TRS, dominates the social media. The official party handle (with 2,39,000 followers) stunts both the Congress (with 35,000 followers) and the BJP, with 26,000. The only party with a comparable social media presence is the Telugu Desam Party.

In Chhattisgarh, chief minister Raman Singh has long been a significant presence on Twitter. As with Shivraj Chouhan in Madhya Pradesh, the importance of Singh as a central figure in the party has meant that the opposition is more focused on attacking him than central leaders. Congress leaders were more likely to mention Raman Singh in their tweets than Rahul Gandhi or any other major leader from their fold.