Why Delhi may face tomorrow what Cape Town faces today

Per capita availability of water is falling fast and unless this is checked, parts of India could soon run dry

This July, Cape Town in South Africa is expected to run out of water, an event termed Day Zero. India should be worried as it is one of the most water-stressed countries in the world. Water availability, measured as renewable freshwater resources, stood at about 1,100 cubic metres per person in India in 2014, according to the Food and Agriculture Organization’s (FAO’s) AQUASTAT database. This is only slightly better than the annual per capita renewable freshwater availability of 800 cubic metres in South Africa and way below the 2,000 cubic metres in China. Renewable internal freshwater resources refer to internal river flows and groundwater from rainfall in the country, and exclude inflows from upstream countries (groundwater and surface water). Data from the World Resources Institute shows that India is among the highly water-stressed countries in the world.

More than half of India’s total water supply comes from groundwater resources, which have been severely depleted because of excessive use, especially in the agrarian regions of Punjab and Haryana. It is not surprising that these states, along with Delhi are among the most water-stressed parts of the country today. 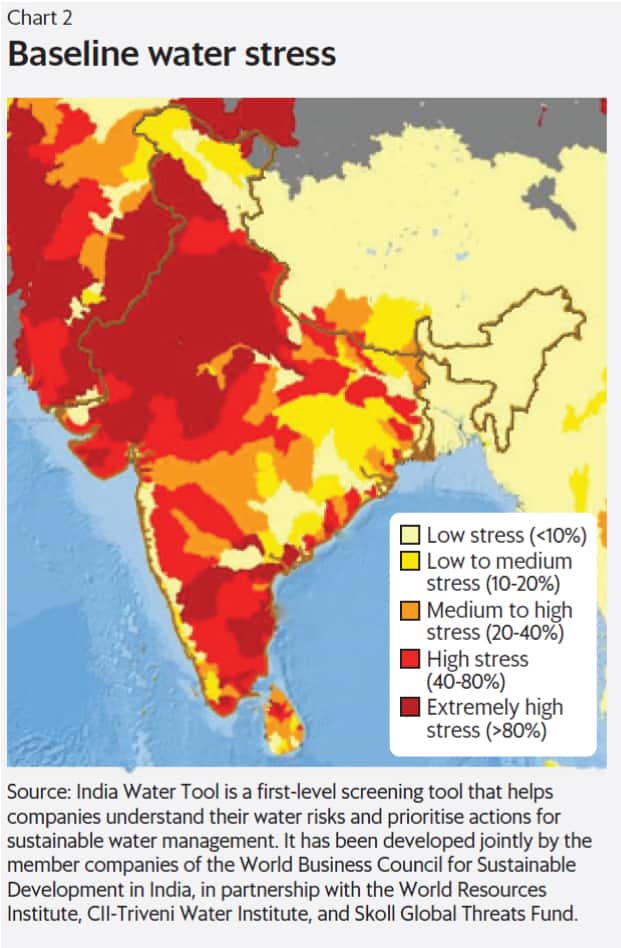 The share of districts with overexploited groundwater reserves (where 100% of available groundwater was extracted) rose from 3% in 1995 to 16% in 2013. Groundwater exploitation has increased after the Green Revolution because of the promotion of water-intensive crop varieties, and the lack of a rational water policy that would regulate use.

A previous Plain Facts column had pointed out how government policies often encourage the production of water-guzzling crops in areas where they might not be the most efficient to grow.

For instance, Punjab has the highest share of rice procurement in the country despite not being the most efficient state in producing rice in terms of water usage. Thus, India tends to use more water than other major agricultural countries for growing crops.

While India is blessed with major rivers, there is a sharp regional skew in the availability of surface water. The bulk of available surface water in India is concentrated in the northern and eastern regions, in the Ganga-Brahmaputra river basins.

Not surprisingly, inter-state water wars have been a prominent feature of India’s south, and farmer suicides have been growing in drought-affected southern states.

The sharing of river water has become a political battleground in the south, as seen in the battle over Cauvery waters between Karnataka and Tamil Nadu.

Not just water scarcity, but water quality is also a problem in the country. About 60% of India’s districts face the problem of groundwater contamination or scarcity or both. Despite progress, India still lags its peers in reducing deaths from water-borne diseases like diarrhoea. Between 2005 and 2015, India recorded the lowest decline in mortality rate of diarrhoeal diseases among the Brics economies of Brazil, Russia, India, China and South Africa.

India’s water crisis poses a threat to its economic development as well as its political stability. Unless steps are taken to reverse the depletion and contamination of India’s water resources, India’s cities and villages may face a fate worse than Cape Town in the coming years.