Patancheru, Andhra Pradesh: When researchers analysed vials of treated waste water taken from a plant in this south Indian town where about 90 Indian drug factories dump their residues, they were shocked. Enough of a single, powerful antibiotic was being spewed into one stream each day to treat every person in a city of 90,000. 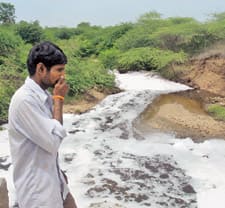 Raising a stink: A man holds his nose to keep out stench from the polluted Iska Vagu stream in Patancheru, on the outskirts of Hyderabad. Mahesh Kumar A / AP

Those factories produce drugs for much of the world. The result: Some of India’s poor are unwittingly consuming an array of chemicals that may be harmful, and could lead to the proliferation of drug-resistant bacteria.

“If you take a bath there, then you have all the antibiotics you need for treatment," said chemist Klaus Kuemmerer at the University of Freiburg Medical Center in Germany, who did not participate in the research.

At first, Joakim Larsson, an environmental scientist at the University of Gothenburg in Sweden, questioned whether 100 pounds (45.36kg) a day of ciprofloxacin could really be running into the stream. He was so baffled by the unprecedented results that he sent the samples to a second lab for independent analysis.

When those reports came back with similarly record-high levels, Larsson knew he was looking at a potentially serious situation. After all, some villagers fish in the stream’s tributaries, while others drink from wells nearby. Livestock also depend on these watering holes.

The medicines are excreted without being fully metabolized by people who take them, while hospitals and long-term care facilities annually flush millions of pounds of unused pills down the drain. Until Larsson’s research, there had been widespread consensus among researchers that drug makers were not a source.

The consequences of the India studies are worrisome.

Before Larsson’s team tested the water at Patancheru Enviro Tech Ltd plant, researchers largely attributed the source of drugs in water to their use, rather than their manufacture.

Possibly complicating the situation, Larsson’s team also found high drug concentration levels in lakes upstream from the treatment plant, indicating potential illegal dumping—an issue both Indian pollution officials and the drug industry acknowledge has been a past problem, but one they say is practised much less now.

In addition, before the study detected such large concentrations of ciprofloxacin and other drugs in the treated wastewater, levels of drugs detected in the environment and drinking water worldwide were minute, well below a human dose.

“Who has a responsibility for a polluted environment when the Third World produces drugs for our well-being?" Larsson asked scientists at a recent environmental research conference.

M. Narayana Reddy, president of India’s Bulk Drug Manufacturers Association, disputes Larsson’s initial results: “I have challenged it," he said. “It is the wrong information provided by some research person."

Larsson’s research has created a stir among environmental experts, and his findings are widely accepted in the scientific community.

“That’s really quite an incredible and disturbing level," said Renee Sharp, senior analyst at Washington-based Environmental Working Group. “It’s absolutely the last thing you would ever want to see when you’re talking about the rise of antibiotic bacterial resistance in the world."

The more bacteria is exposed to a drug, the more likely that bacteria will mutate in a way that renders the drug ineffective. Such resistant bacteria can then possibly infect others who spread the bugs as they travel. Ciprofloxacin was once considered a powerful antibiotic of last resort, used to treat especially tenacious infections. But in recent years many bacteria have developed resistance to the drug, leaving it significantly less effective.

“We are using these drugs, and the disease is not being cured—there is resistance going on there," said A. Kishan Rao, a medical doctor and environmental activist who has treated people for more than 30 years near the drug factories.

Patancheru became a hub for largely unregulated chemical and drug factories in the 1980s, creating what one local newspaper has termed an “ecological sacrifice zone" with its waste. Since then, India has become one of the world’s top exporters of pharmaceuticals, and the US—which spent $1.4 billion (Rs6,900 crore) on Indian-made drugs in 2007—is its largest customer.

“I’m frustrated. We have told them so many times about this problem, but nobody does anything," said Syed Bashir Ahmed, 80, casting a makeshift fishing pole while crouched in tall grass along the river bank near the bulk drug factories. “The poor are helpless. What can we do?"