Move lowers age for criminal trial of juvenile from 18 to 16 years for heinous crimes, raises jail term to seven years

New Delhi: Overlooking reservations expressed by child rights activists and a section of political parties, the Rajya Sabha on Tuesday approved the Juvenile Justice (Care and Protection of Children) Bill, 2015, which lowers age of juveniles from 18 to 16 years for heinous crimes.

The Lok Sabha passed the bill on 7 May 2015. Once the President gives his assent, the new law that will come into being will treat 16 to 18-year-olds as adults for heinous offences, after a decision of the juvenile justice board.

This is a significant departure from the earlier law, where all children under 18 years of age were treated equally.

The legislation was passed in the backdrop of the 16 December 2012 case, where 23-year-old student Jyoti Singh was fatally gangraped inside a moving bus in the capital by six men, including a minor. The incident caused national outrage, and the culprits, excluding the minor who was released on Sunday, were sentenced to death.

Under the new law, juvenile justice boards will comprise psychologists, social workers and experts, according to the women and child development ministry. All cases will be brought before these boards, which will then assess the mental and physical capability of the juvenile and decide whether he or she is to be tried as an adult or not.

The law also permits any 16- to 18-year-old, who commits a serious offence, to be tried as an adult if apprehended after the age of 21 years. In addition to this, the minimum punishment for heinous crimes has been raises from three to seven years.

Passage of the legislation gained urgency after the minor, who is now 20 years old, was released on Sunday. This was after several attempts failed to extend the stay of the juvenile at a place of safety for conducting a mental assessment. The Delhi high court declined, saying that the maximum period of incarceration in the Juvenile Justice Act, 2000 was three years. The Supreme Court agreed, saying there was no legal sanction to allow such an extension. 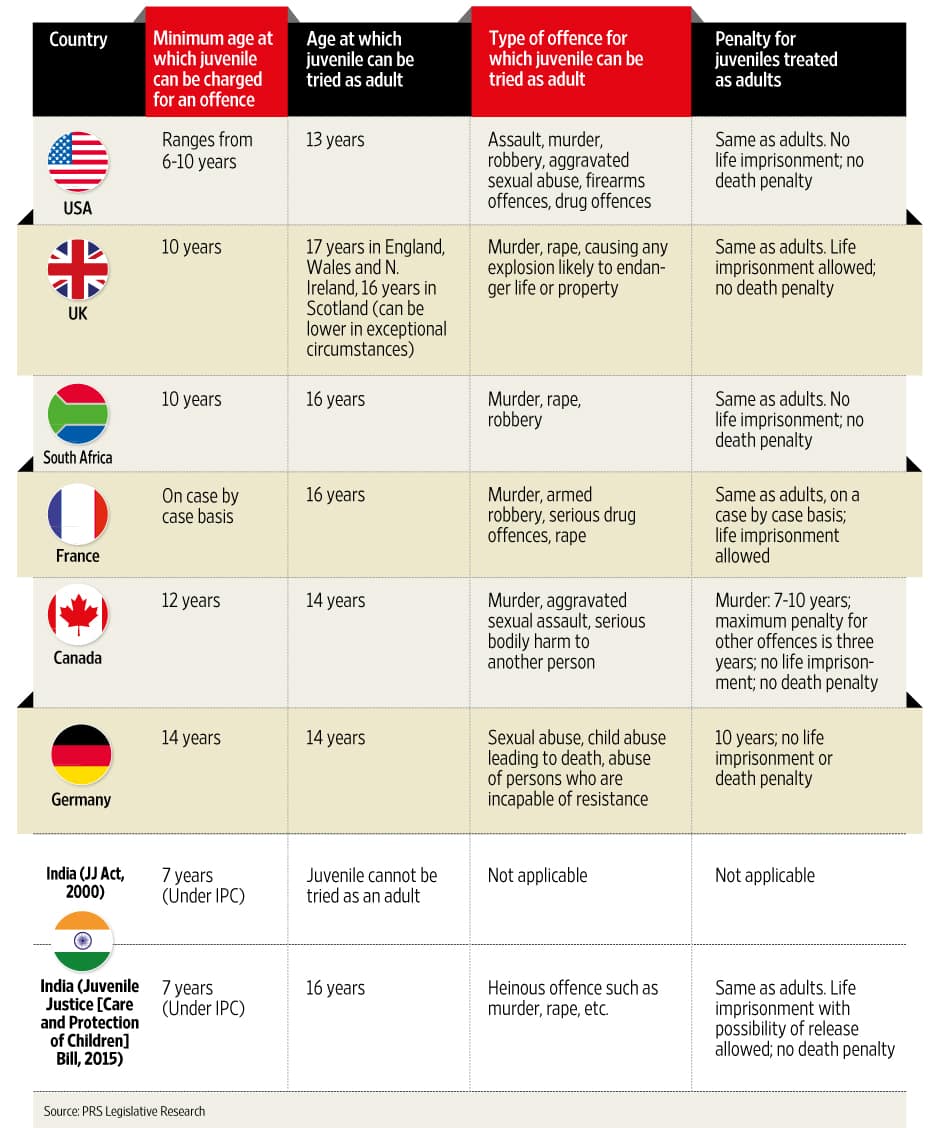 The ensuing outrage created public pressure for the enactment of a drastic deterrent.

“Unfortunately, our politicians have given in to lynch mobs and the hype created by the media, and their political gains have taken precedence over child welfare. Now we will have 16-year-old sexual offenders who will have to live with that tag for their entire life, and every child will be treated as a potential rapist. This shows how regressive our country has become," said Enakshi Ganguly Thukral, co-founder of HAQ: Centre for Child Rights, a non-profit organization.

However, the government defended the decision.

“Lowering of the age from 18 to 16 does not mean that the all 16-year-olds who have been charged with a crime will be sent to jail immediately," said Maneka Gandhi, union minister of women and child development, while introducing the legislation in the Rajya Sabha on Tuesday.

She said the proposed law will form a new legal layer to review juvenile cases.

While the Congress did not want the juveniles to be kept with hardened criminals and wanted a broad-based juvenile justice board, the All India Trinamool Congress, which supported the draft law, called for focusing on rehabilitation.

“The foundation of the J.J. Bill should be on reform and rehabilitation," Trinamool Congress parliamentarian Derek O’Brien said.

However, the Rajya Sabha was divided when it came to passing the legislation. The Communist Party of India (Marxist), or CPM, and the Congress demanded the bill be sent to a select committee while the Trinamool Congress and the Bharatiya Janata Party wanted it to go to vote directly. The CPM staged a walkout when the bill went to vote directly.

The bill defines heinous offences as any which would be punishable under the Indian Penal Code with a minimum of seven years in prison, which would include rape, murder, acid attacks, kidnapping for ransom and dacoity with murder.

The amendment also introduces a provision for inter-country adoption, which was previously prohibited.

The Juvenile Justice Bill was introduced despite opposition, including a negative by the J.S. Verma Commission, which was constituted to suggest changes to criminal law. The Verma Commission had noted in its report that “the Juvenile Justice Act has failed miserably to protect the children in the country. We cannot hold the child responsible for a crime before first providing to him/her the basic rights given to him by the Indian Constitution".

The UN Convention on the Rights of the Child requires all signatory countries to treat every child under the age of 18 years as equal. The provision of trying a juvenile as an adult contravenes the convention to which India is a signatory.

Activists say the decision was made under pressure. In a column in The Indian Express, G. Mohan Gopal, director at Rajiv Gandhi Institute for Contemporary Studies and former director of National Judicial Academy and National Law School of India University in Bengaluru, criticized the bill for blindly following the US.

“The law blindly copies and applies to India the failed, and much criticised, policy of the United States, which involves ‘transferring’ children to the adult criminal justice system. The US has one of the worst systems of criminal justice in the world, with a high crime rate, high incidence of violence, massive corruption and brutality in the prison system, and the harshest punishment, including the highest rate of imprisonment," Gopal says in the column. A 2014  analysis (bit.ly/1PitKB8) by criminal law expert Mrinal Satish on the proposed amendments argued that lowering the age of trying juveniles as adults for offences, such as rape, allowed parents, guardians and society to control sexual autonomy of women.

On Tuesday, the Delhi Commission for Women (DCW) supported the bill. Swati Maliwal, chairperson of the DCW, had written to heads of political parties, including the BJP and the Congress, to ensure the bill gets passed in the current session.

Welcoming the passage of the Bill in the Rajya Sabha, Maliwal said on Twitter, “India failed to give justice to Nirbhaya. But once again her sacrifice led to reform for others. JJ amendments finally passed in Parliament."