Paris: Governments cannot rely solely on low inflation and easy monetary policy to consolidate recovery and boost employment even though growth prospects are improving in the world’s largest economies, the Paris-based Organisation for Economic Cooperation and Development (OECD) said on Wednesday.

Growth remained too low to “repair and activate labour markets", it said, noting that “abnormally low inflation and interest rates create a growing risk of financial instability with risk-taking and leverage driven by liquidity rather than fundamentals".

Central banks would continue to drive recovery but the OECD warned against an exclusive reliance on monetary policy.

“A more balanced approach to policy is required with fiscal and, especially, structural policies providing synergistic support to monetary policy," the think-tank said. 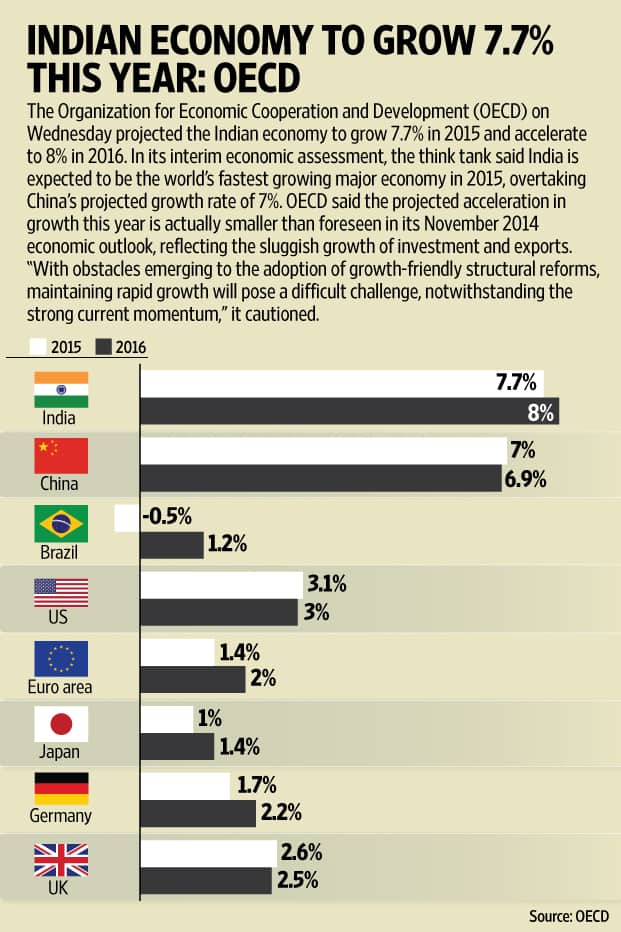 In a regular overview of the world economy, it confirmed its forecast of 3.1% growth in the US economy this year and 3% next, with forecasts for India, the euro zone and Japan raised the most.

It raised its euro zone growth forecast to 1.4% this year and 2% in 2016, in both cases up 0.3 points on its last forecast made in November 2014, thanks to an acceleration of activity in the zone’s largest economy, Germany.

For India, the OECD boosted its forecast significantly to 7.7% GDP (gross domestic product) growth in 2015, 1.3 percentage points higher than it was previously flagging, while for China it trimmed its forecast by 0.1 points to 7% in 2015.

“India is now expected to be the fastest-growing major economy in 2015-16, overtaking China," said the OECD, which predicted growth accelerating to 8% in 2016 versus 6.9% in China.

For economies representing some 70% of the global economy: the US, euro zone, Japan, Britain, Canada, China, India, Brazil, the OECD said it was now expecting GDP growth of 4% in 2015, up 0.1 points from its previous November prediction.