Centre, states brace for a testy face-off on GST rates

New Delhi: The goods and services tax (GST) council on Tuesday worked out a compensation formula for states and is now bracing for a testy debate on rates.

The centre has proposed a tiered rate structure with the rates varying from 4% for commodities like gold to 26% plus cess on so-called sin goods.

It also proposed two standard rates of 12% and 18% extending to a majority of the taxable goods. A lower tax slab of 6% is proposed for those essential commodities on which no excise duty is levied at present by the centre but a 5% value-added tax is levied by the states. 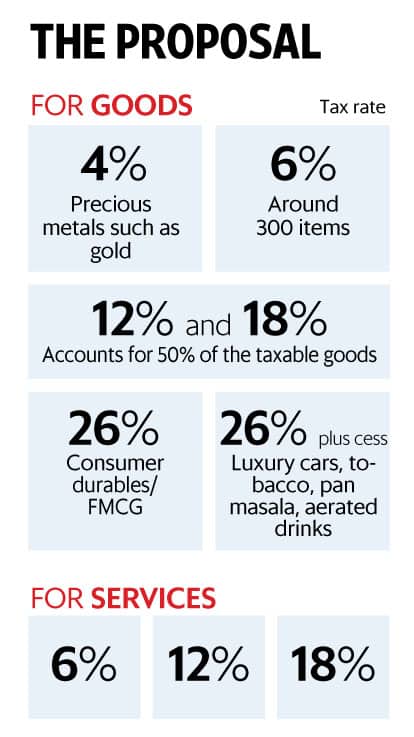 However, the debate on Wednesday is likely to start on the wrong note after the centre proposed a cess on sin goods to fund the compensation to be paid to states for losses arising from a transition to GST.

It is likely to emerge as a key point of disagreement between the centre and the states as the latter have always opposed levy of central cesses that are excluded from the divisible pool of taxes.

The differences aside, the country moved a step closer to rollout of the GST—the deadline for which is 1 April—which will for the first time economically unify the country.

On the first day of the three-day meeting of the GST council, the centre detailed its proposal for the structure of the tax rates under GST.

“There are five alternative options for rates that have been worked out. It will be discussed in the meeting on Wednesday," finance minister Arun Jaitley said at a media briefing after the meeting, adding that the rate structure should be such that it would not cause either inflationary pressures in the economy or revenue losses to the exchequer.

Around 50% of the items in the retail inflation basket will be exempted from GST.

The centre estimates total compensation to states for losses arising from a transition to GST to be around Rs50,000 crore in the first year. This will be met through a fund—Rs26,000 crore will come from the corpus generated by the levy of the clean environment cess; the balance will be collected from the cesses to be levied on demerit goods such as tobacco, luxury cars, pan masala and aerated drinks.

The cess will vary and will be levied over and above the 26% GST rate, as per the centre’s proposal, said revenue secretary Hasmukh Adhia.

But this will be easier said than done. Opposing this proposal, Kerala finance minister Thomas Isaac tweeted, “Central govt. wants to impose a cess on #GST to compensate the states. This is in contradiction with the concept of GST itself."

The GST council decided that the base year for calculating the compensation figure will be 2015-16. A uniform growth rate of 14% for all states will be assumed for calculating the revenue due to states and the shortfall, if any, from a transition to GST.

Besides the indirect tax collections of the centre and the states, the taxable base will also include the revenue from the 2% central sales tax.

For special category states and the North-Eastern states, the exemptions will be included in their revenues while computing compensation.