IT hub survives on diesel as Bengal govt trips on power

IT hub survives on diesel as Bengal govt trips on power

Kolkata: Infospace, an information technology (IT) park in Kolkata being built by Unitech Hi-Tech Structures Ltd—an arm of the Unitech Group—is perhaps the only special economic zone, or SEZ, in the country which is running entirely on diesel generators.

The West Bengal government-owned power utility, which was to supply power to Infospace, has not been able to lay cables, forcing the IT park to burn 110,000 litres of diesel a month even with as few as 1,500 people working. 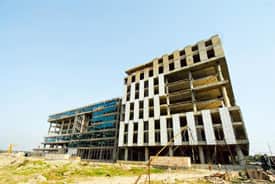 Electricity issues: Construction work in progress at the Infospace IT hub at Rajarhat in Kolkata. Indranil Bhoumik / Mint

The IT park, which runs four 1,250kVA generators and has four more as back-up, has obtained a special licence from the state government to store up to 40,000 litres of diesel. But pollution is the key concern, and Unitech has hired specialists for the maintenance of the generators, according to an Infospace official. He did not want to be named because he isn’t authorized to speak to the media.

The first phase of the IT park was launched in August. Genpact is likely to be Infospace’s biggest tenant, having already booked 750,000 sq. ft, according to the Infospace official.

As more companies move in, Unitech is worried that it would have to burn more diesel to generate power for its tenants, and what is worse is that there is no certainty about when New Town Electricity Supply Corp., or NTESC—the company that was to supply power to Infospace—would be able to connect the IT park to its grid.

Though Unitech expects power supply to begin by the end of this month, Moloy De, chairman of the West Bengal State Electricity Board, which controls all state government-owned power companies, refused to commit a deadline for establishing power distribution infrastructure in Rajarhat, an extension of Kolkata where Infospace is located.

De said power cables could not be laid in Rajarhat, which is being developed on the lines of Gurgaon as a hub for IT companies, because locals wouldn’t let power utilities erect distribution towers on their land.

The West Bengal government, however, has been wooing companies to the state promising cheap and abundant power. Average power tariff in Kolkata, at around Rs3.90 per unit, or 1kWh, is the cheapest among all metros. The state government-owned power utilities, however, have not been able to scale up distribution infrastructure to supply power in extensions of the city such as Rajarhat.

Power generated by burning diesel costs Infospace Rs9 per unit, whereas power from NTESC would have cost Rs5 per unit. The Rs4 per unit additional cost is being passed on to tenants, even if partly, because it has been factored into the monthly maintenance cost, which ranges from Rs12-24 per sq. ft, according to the Infospace official.

The cost of power would have significantly gone up had Infospace not been an SEZ and enjoyed tax breaks on diesel. According to the Infospace official, the IT park buys diesel directly from companies such as Indian Oil Corp. Ltd and Bharat Petroleum Corp. Ltd and it costs 25-30% less because of tax waivers granted to SEZs.

“The building (Infospace) has the uniqueness of providing 100% power back-up to ensure business continuity for IT companies," said Prasoon Mukherjee, chairman of Unitech Hi-tech Structures, playing down the inconvenience of having to run generators round the clock.

But the Infospace official said Unitech, which has already spent Rs550 crore on the project, might not have launched the IT park without power supply had it not committed delivery to high profile tenants such as Capgemini and Genpact.