Gujarat sees 68.7% voter turnout in second phase of polls; results for the two states will be out on 18 December

New Delhi: Exit polls on the Gujarat and Himachal Pradesh assembly elections project a saffron win in both the states.

To be sure these are projections and the actual counting of votes is scheduled to take place on 18 December. 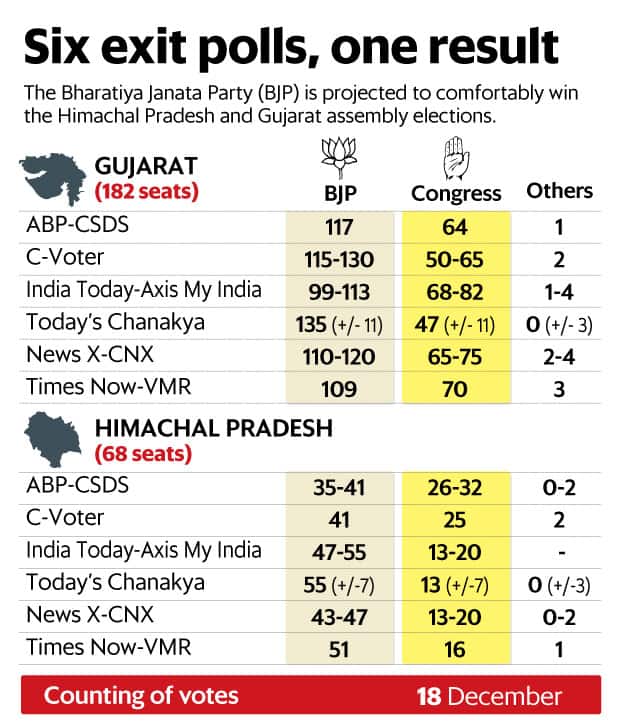 If indeed the forecast holds true, then not only will the Bharatiya Janata Party (BJP), under the leadership of Prime Minister Narendra Modi and party president Amit Shah, have achieved an unprecedented expansion of their national electoral footprint, it would be a body blow to Rahul Gandhi, the imminent political heir apparent to Congress party president Sonia Gandhi.

The exit polls were announced after the second and final phase of polling ended in Gujarat on Thursday.

Elections in both the states witnessed a direct clash between the BJP and the Congress party. In fact, they mark the start of a series of contests between the two political rivals over the next 12 months—in Karnataka, Madhya Pradesh, Chhattisgarh and Rajasthan.

While the BJP is trying to win a fifth consecutive term in Gujarat, the polls are important for Congress as it is the first assembly election for Rahul Gandhi after he was anointed president-elect of his party.

“The exit polls show that the Modi charisma and his connect with the people of Gujarat is still there. He still has a link with the people here. In comparison to the opposition, the BJP also has a stronger cadre base and organizational structure in the state," said Vidyut Joshi, an Ahmedabad-based political analyst.

The hill state of Himachal Pradesh has seen governments alternate between the Congress and the BJP since 1993.

The election comes at a time when the state is facing increased crime, unemployment and a leadership crisis in the political parties.

Though development remained a key theme in the campaign for both the states, in Gujarat caste emerged as a factor after a long time. The incumbent BJP government faced a sharp challenge from the Patel community, a crucial voter base of the party, over demands for quotas in education and government jobs.

“The surveys today have predicted that a BJP government will be formed. The people of Gujarat have always rejected the politics of negative, lies and vote-bank politics," Gujarat chief minister Vijay Rupani said, while addressing a press conference on Thursday in Ahmedabad.

The ruling BJP was facing opposition due to the issues of demonetization which affected the small and medium traders, implementation of the goods and services tax (GST) and rural distress.

The last day of polling also saw the Congress party protest against Modi’s roadshow, taken out after casting his vote. The Congress alleged that he had violated the model code of conduct.

Congress chief spokesperson Randeep Singh Surjewala said, “It is a sad day for the country as EC has denigrated the Constitution."

The Congress’s attack against the EC and Modi came a day after the poll panel issued a showcause notice to Rahul Gandhi for “prima facie" violating the model code by giving interviews to Gujarati television channels on Wednesday.