Men are more likely to remarry than women, even though women face that question far more than men

According to a 2014 Pew Research Center report on remarriage in the US, about 64% of men whose spouse was dead, or were divorced, chose to remarry, against 52% of women, in 2013. In India, remarriage is a rarely-exercised choice: not even 1% opt for it. Among those that do, there is a pronounced gender differential: the percentage of men who remarry is twice that of women. This gender differential becomes starker when measured against the percentage of people in a position to remarry. The percentage of women whose spouse had died or were divorced/separated is more than three times the percentage of men. Worse, it increases with age. On the Holmes and Rahe stress scale for 43 adverse life events, losing one’s spouse ranks number one, increasing a person’s susceptibility to illness, scarring them emotionally and increasing risk of death. 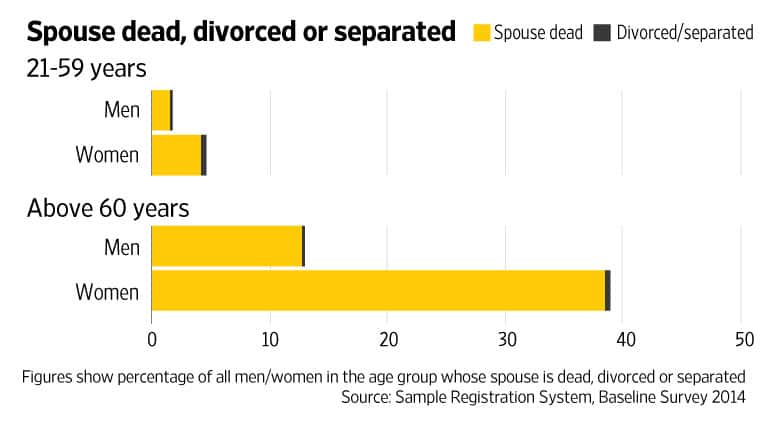 The significant gender differential in the percentage that has lost their spouse is partly the outcome of women in India living longer than men. It was in 1979 that gender trends in life expectancy reversed in India. In 2015, women had an average life expectancy of 69.9 years—three years more than men.