New Delhi: A day after announcing a set of measures to boost short-term capital inflows into the country to rein in rupee depreciation and curb rising current account deficit (CAD), finance minister Arun Jaitley on Saturday sent a strong signal of fiscal prudence by committing to the fiscal deficit as well as capital expenditure targets.

Jaitley’s commitment to maintaining the budget targets in a pre-election year also in a way rules out any cut in excise duty on petroleum products which have been rising keeping in pace with international crude oil prices. In a Facebook post in June, Jaitley had said demands of huge cuts in fuel prices by opposition parties could lead India into a debt trap.

Briefing reporters after a review meeting of all the departments of finance ministry chaired by Prime Minister Narendra Modi, Jaitley said after presentations made by secretaries of departments of economic affairs, revenue, expenditure and disinvestment, Prime Minister Modi expressed satisfaction regarding various parameters of the economy. “Government is confident of meeting the 3.3% fiscal deficit target. So far, the government has spent 44% of the budgeted capital expenditure till 31 August and there will be no cuts in capex by the end of this year," Jaitley said. 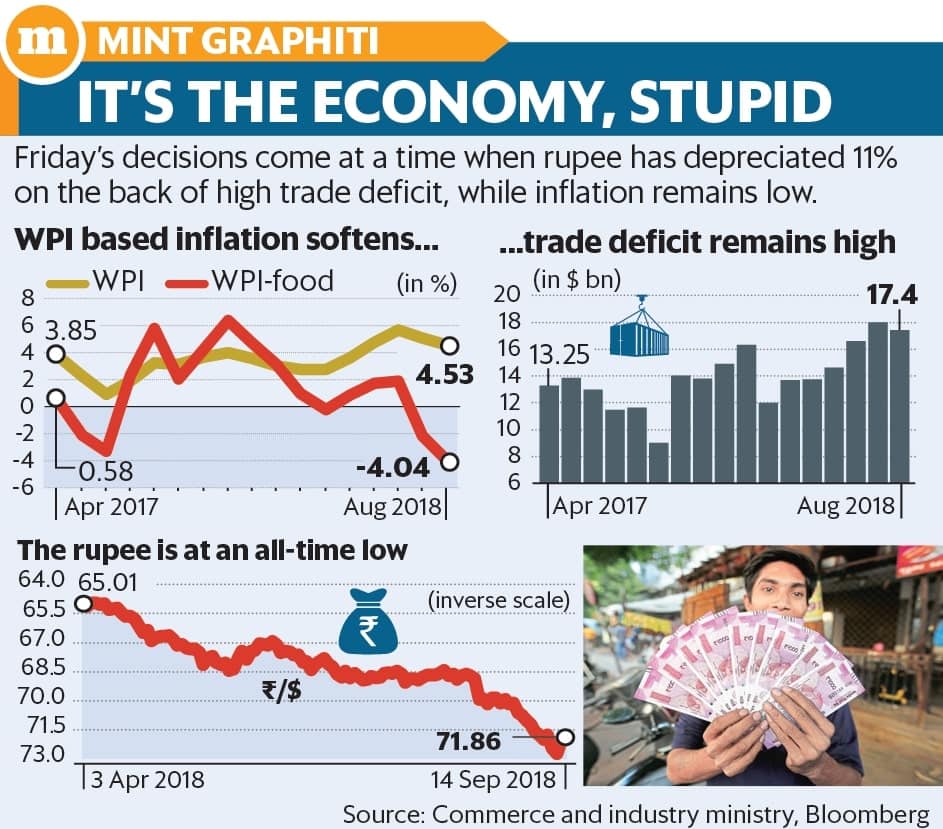 Rating agency Moody’s, however, earlier this month in a note said government is unlikely to meet the fiscal deficit target due to higher than budgeted oil prices and rising interest rate scenario.

Government can ill-afford to lower the guard against fiscal deficit as a twin deficit problem including already high current account deficit could further dampen market confidence in the Indian economy.

“On direct tax collections are concerned, we can now see the impact of all the anti-black money measures we have taken, of demonetisation and the GST (goods and services tax). There is a phenomenal increase in the number of people filing tax returns and the quantum of advance tax being paid. The Central Board of Direct Taxes (CBDT) is very clear that this year we will be able to collect in excess of the budgeted target," said Jaitley.

Jaitley’s confidence of meeting gross tax revenue target of ₹ 22.7 trillion this fiscal, a 17% jump from what was collected in FY18, stems from a strong growth trend in income tax receipts, the anti-evasion measures taken in the GST regime and expectations of higher consumption of consumer goods driven by GST rate cuts that came into force towards the end of July.

A 71% increase in income tax return filers before the 31 August deadline this year of 5.42 crore compared to the number of filers in the same time a year ago hints at improved direct tax compliance. The GST cuts on items like air conditioners, small televisions and washing machines announced in July has marginally depressed the combined GST receipts of union and state governments in August to ₹ 93,960 crore compared to receipts in the previous month. The tax cuts were effective from 27 July.

Experts said that the optimism on meeting tax target was well placed. “I am reasonably confident of the government meeting the total tax receipts target, combining direct and indirect taxes, as any slippage on indirect tax collection may be compensated by growth in direct taxes. We are now seeing the impact of demonetisation on direct taxes," said M.S. Mani, partner, Deloitte India.

The government will, however, find it an uphill task to meet the disinvestment target after cancelling immediate plans of selling national carrier Air India, although Jaitley said the government will meet the ₹ 80,000 crore target for stake sale in state-owned enterprises.

On Friday, Jaitley announced five decisions to address the issue of the current account deficit, which touched 2.4% of gross domestic product in the June quarter. Mandatory hedging conditions for infrastructure loans through the external commercial borrowing (ECB) route will be reviewed and a 20% exposure limit on investments by foreign portfolio investors (FPIs) in debt to a single corporate group will be removed.

The government will permit the manufacturing sector to access ECBs up to $50 million with residual maturity of one year instead of three years. Masala bonds will be exempted from withholding tax this financial year and Indian banks will be allowed to become market makers in masala bonds including by underwriting.

Economic affairs secretary Subhash Chandra Garg told CNBC-TV18 on Friday that the five measures will have an impact of around $8-10 billion.

The weaker rupee and rising fuel costs have become a politically sensitive issue with the main opposition Congress party having led a Bharat bandh on Monday. The rupee has depreciated more than 12% so far this year on a widening current account deficit and higher oil prices. The domestic currency is trading at 71.86 against the US dollar, compared to its Wednesday closing of 72.19.