Expats warm up to India, thanks to improved economy, low costs of living

Bengaluru: India was among the 10 worst places for expatriates to live in 2015, according to InterNations Expat Insider survey. But this year, things are looking up. India moved up seven places to be ranked 49 out of 67 countries as expats rated the country higher due to its improved economy and low costs of living.

The InterNations Expat Insider surveyed about 14,000 respondents and ranked countries on factors such as the quality of life, personal finance, working abroad, and settling in.

Among these factors, India fared well under the ‘working aboard factor’ where nearly half of the expats said they had better confidence in the economy up from 37% last year. In addition, 23% of expats now are very satisfied with their job security, compared to the global average of 17%.

When it comes to personal finances, India is, in fact, among the top 10 countries that allow expats to have more disposable income when compared to other countries. 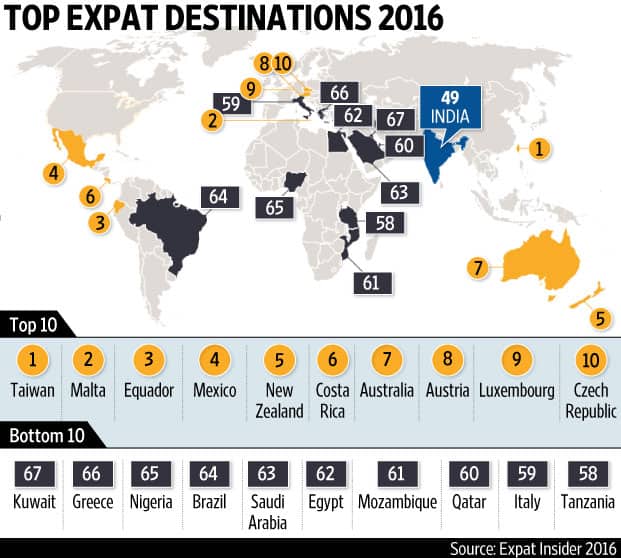 About 68% of respondents claim that their disposable income is overall more than enough to cover everything they need for in their daily life. In comparison, less than half of the worldwide respondents (48%) say the same.

But the problem for expats is not so much with respect to finances but with culture.

While a majority of expats (71%) find Indians friendlier than other countries towards foreign residents, only about one third of the respondents (34%) feel it is easy to settle down in India, as opposed to a global average of 59%.

The report attributes this to cultural differences that alienate foreigners.

In the ‘feeling welcome’ factor, India is only ranked 59 out of 67. The cultural differences play a big part as 41% of expats find it difficult to get used to the local culture, as opposed to the 21% being the global average.

If culture is one sore point, then safety factor is another.

The survey found that only about half of those surveyed were happy with their personal safety, which is significantly less than the global average of 77%.

Factors like political stability and peacefulness led to a below-than global-average ranking in the Quality of Life Index (56 out 67).

As far as Indian expats go, most Indians prefer to work in the Persian Gulf region (16% in UAE and 8% in Oman) as it is close to their home country and offers high wages to expats, said the report.

Taiwan was rated as the best place for expats, while Tanzania was ranked the worst.