A no-touch switch that helps kids get back in touch

A no-touch switch that helps kids get back in touch

Chennai: For many people, life revolves around the click of a mouse, an automatic convenience to plunge into the digital world.

But for more than a million Indians with cerebral palsy—who are mostly unable to speak, likely to be wheelchair-bound, and in desperate need to use a computer to get an education or simply communicate—a mouse click is anything but easy. 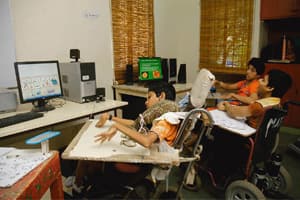 Technological aid: Children at a centre run by Vidya Sagar in Chennai operating the device. A child can activate a choice on his computer with a slight movement of the head, hands, knees or legs near ADITI. Sharp Image

Analogue Digital Theremin Interface (ADITI) is a palm-sized antenna-like gadget that can be fixed to a computer in lieu of a mouse. A child can activate a choice with a slight movement of the head, hands, knees or legs near the gadget.

It generates a loud beep to assist visually impaired children.

Developed by the Indian Institute of Technology (IIT), Madras, one of India’s top engineering schools, the device is set to be mass produced in association with Bangalore-based technology firm MindTree Ltd.

“My kids can move but they cannot move in a controlled way," says Namita Jacob, a Chennai-based special education expert. “The motor system of a child with cerebral palsy is impaired. So you are left with the senses of hearing, which is great, and smell and taste. But then how are you going to talk to me?"

She adds: “What really captured my attention about ADITI is that I can use sound to make sure I am close. And I don’t need the sensation of touch to confirm the location of the access device."

Jacob offered feedback to her husband Anil Prabhakar, the IIT-Madras professor who has created and patented ADITI.

For more than a decade, Jacob and her associate Kalpana Rao struggled to create independent learning mechanisms for children at Vidya Sagar—a Chennai-based voluntary group that works with children and young adults with cerebral palsy.

“I understand their body language,“ says Rao, a spokesperson for Vidya Sagar and mother to Bhavna Rao, a 23-year-old cerebral palsy patient. “I can tell the children a story and they can respond by pointing to a bunch of choices I offer on a chart or a computer screen. But it depends on what I ask them about the story. It is not proactive. We are looking for independent expression and ADITI offers that."

With ADITI, physically challenged children can use a scroll-mode software that moves gradually from a picture, alphabet or word choice to another.

In some cases, it also reads out the options.

This lets children with cerebral palsy choose letters and “type out" words they want to express, instead of being limited to a set of options offered to them on a prepared chart.

Rao’s daughter Bhavna is studying at Chennai’s Ethiraj College to become a finance professional. She is wheelchair-bound, cannot use her hands, is non-verbal, and mostly uses her head or left knee to click other single-click imported devices that can cost as much as Rs5,000.

About three years ago, Bhavna tested ADITI for Prabhakar, who worked on creating the first prototype of the device based on a Russian electronic musical instrument called Thereminvox.

“It is a very easy to use the device. It allows access from multiple areas (hand, foot, head). So, actually I can use it for long hours without fatigue," says Bhavna, who operates her Microsoft Power Point slides in class by keeping ADITI near her feet, allowing her to face the audience effortlessly and with confidence.

“Of course I have dropped it a number of times, but it is a toughie," says Bhavna in an email.

Usually, non-touch devices to access a computer made overseas are priced upwards of Rs1 lakh. Buying these is difficult for families having children with cerebral palsy, who already face high living and healthcare costs. Moreover, the prohibitive cost forces buyers to use it only occasionally and, even then, with a lot of caution.

“We wanted to create something rugged that was cheap and could go out to the homes of these children," says Prabhakar.

For over two years, Prabhakar hired a technician to assemble close to 70 pieces at the IIT campus. But being a professor who has other responsibilities, he was unable to cope with the increasing demand for the device. So he decided to get in touch with MindTree for large-scale production of ADITI.

MindTree Foundation, the IT firm’s not-for-profit arm, networked with one of its prototype manufacturers who offered to line produce and sell ADITI for Rs570, nearly Rs200 less than Prabhakar’s calculations.

The first batch of 100 units will be packaged and shipped by the end of March to Vidya Sagar, and subsequently to other special schools that are interested.

India is looked upon as the leader in the disabilities sector in Asia, but its mass production of assistive technology has been limited to prosthetics and hearing aids. Devices for children and adults with cerebral palsy have been mostly created on a piecemeal basis for specific individuals, never in large quantities.

Bur ADITI is yet to help Bhavani Kasi, a 20-year-old Vidyasagar student who needs Tamil language software to use in scroll mode on the computer.

The gadget could also do with improvements to aid her 17-year-old classmate Sanjay Manikandan, who has better control over the movement of his head than his hands. He is unable to use ADITI with his head because the standard round handles of his wheelchair don’t allow ADITI to be safely fixed on to it.

MindTree is working on improving the ergonomics and industrial design for ADITI’s next version. Prabhakar, too, is taking the help of other groups at IIT to develop scroll-mode software in various Indian languages.

Bangalore-based Prashanth Kamath is a MindTree employee with cerebral palsy, who has been working on developing assistive technologies for the company’s research and development arm.

Kamath says it is crucial to ensure “the last mile is okay", which means the product has to be delivered efficiently and should work effectively for the user.