Officials say they will make wide-ranging changes, including stricter federal rules for hedge funds, credit rating agencies and mortgage brokers, and greater oversight of the complex financial instruments that contributed to the economic crisis. 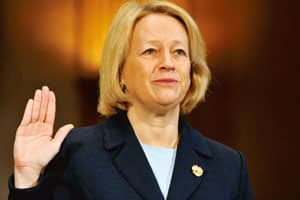 A theme of that report, that too many companies and financial instruments, till now mostly unsupervised, must be swept back under a larger regulatory umbrella, has been embraced as a guiding principle by the administration, officials said.

Some of these actions will require legislation, while others should be achievable through regulations adopted by several federal agencies.

“Until we deal with the compensation model, we’re not going to deal with the conflict of interest, and people are not going to have confidence that the ratings are worth relying on, worth the paper they’re printed on," Mary Schapiro, the nominee to head the Securities and Exchange Commission (SEC), testified this month before the Senate banking committee.

Timothy F. Geithner, the nominee for treasury secretary, made similar comments in testimony before the Senate finance committee.

Aides said they would propose new federal standards for mortgage brokers who issued many unsuitable loans and are largely regulated by state officials. They are considering proposals to have SEC become more involved in supervising the underwriting standards of securities that are backed by mortgages.