One in three plants running on critically low coal supply

One in three plants running on critically low coal supply

New Delhi: More than one-third of India’s coal-based thermal power plants are running on critically low levels of fuel stocks, according to the latest data released by the Central Electricity Authority (CEA) on Monday.

Figures posted on the CEA website on Monday show that, as of 19 April, 32 of 89 thermal power units across 16 states had “critical" coal stocks—seven days or less. Of these, at least 19 had stocks of four days or less. The normative coal stock requirement for these plants is usually 20-30 days of stock. 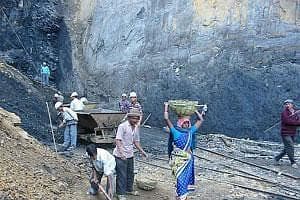 Together, all the 89 plants have a generation capacity of 93,279.5 megawatts of electricity and have an assured daily coal linkage of 1.3 million tonnes (mt).

CEA published these figures even as state-owned Coal India Ltd (CIL), which supplies 80% of the total coal in the country, has initiated the process of signing new fuel supply agreements (FSAs) with power producers. CIL is bound by a presidential order that requires the company to meet 80% of the demands of power producers. A CIL official said that the new agreements will be signed with all the power producers by the end of the month.

“Over the long term, we believe FSAs signed under the presidential directive could help overcome some of the bottlenecks and improve the long-term availability of coal. However, much of the initiative will depend on the government finding a solution to environmental restrictions that prevent extraction of coal lying under forests," ratings agency Fitch Ratings had said on 4 April.

While Mint could not establish the exact coal stock position for the thermal power plants as of Monday evening, officials at some of the companies operating the affected plants said the situation had not changed much in the last three-four days.

Ravi Shanker Sharma, public relations officer at the Rajasthan Rajya Vidyut Utpadan Nigam Ltd, said the thermal power plant at Chhabra in Baran district of Rajasthan has been operating with a coal stock of three days or less “almost ever since it began operations last year".

Sharma, in fact, said that at least on one occasion in February, the Chhabra unit had to be shut down as there was no coal left.

An official of the state-owned NTPC Ltd, who did not want to be identified, said that while pithead power plants were not running on critically low stocks of coal, eight non-pithead plants operated by the company were doing so.

NTPC operates eight non-pithead stations at Dadri and Jhajjar in Haryana, Badarpur in Delhi, Simhadri in Andhra Pradesh, Farakka in West Bengal, Kahalgaon in Bihar, and Unchahar and Tanda in Uttar Pradesh.

This official said that there had been no slowdown in electricity generation at any of the plants being operated by the company on account of these shortages, “except on account of maintenance". Mint could not independently verify this.

Manish Basu in Kolkata contributed to this story.