Higher rate of litigation could be a sign of development

Higher rate of litigation could be a sign of development

A litigious culture does not handicap economic growth, fresh research shows, debunking the widely held view that a high litigation rate creates an environment hostile for business and slows decision-making. 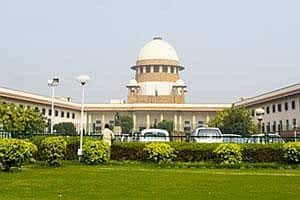 “By emphasizing the relation between civil litigation rates and improved human well-being, we challenge the dogma that increasing litigation rates should be regarded as evidence of a malfunctioning society," Theodore Eisenberg and Sital Kalantry of Cornell University, New York, and Nicholas Robinson from the Centre for Policy Research, New Delhi, wrote in their report.

Mint has reviewed a copy of the unpublished study. 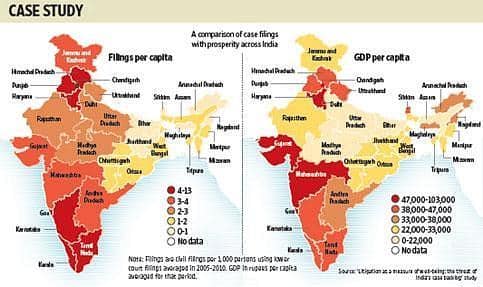 The judiciary in India, while independent of the government, is controlled top-down by the Supreme Court of India, through its collegium, administering appointments of its own judges and the judges to the 22 high courts, among other functions. Below this appellate tier are about 600 district and lower court complexes in India, presided over by about 14,000 judges, which is largely the focus area of the study since they are usually the first instance of filing a lawsuit.

The justice delivery system’s status as a trusted institution is under threat because of a strong correlation between the growing case backlog and a decline in the number of lawsuits.

India’s case backlog ratio has increased 28% from 1977 to 2010. The study argues this might not be the failure of individual judges, but a malaise on an institutional level because of poor infrastructure (fewer courts also) and vacancies on the bench. Another reason attributed to the decline in litigation is corruption, which injects a lack of predictability in the system.

The measure of prosperity used by the authors is primarily per-capita net state domestic product, which is GDP minus depreciation on capital goods. They have also factored in HDI (including lifespan) and population density, or urbanization.

However, the study “does not imply that filing more lawsuits will increase societal well-being", say the authors, who encourage a “reasonable" interpretation of the findings. In fact, the causation is opposite—higher well-being leads to more litigation—they argue.

The authors caution that the current problem with litigation in India appears to be that there are too many delays in the system.?“India’s?challenge is not that too many cases are filed, but that too few are timely adjudicated. Its litigation rate, by world standards, is not high," the study said. “The judiciary, though in increasing demand as the country prospers, could threaten India’s prosperity if it cannot accommodate demands for its services."