New Delhi: Factory output expanded more than expected in August as production of consumer durables picked up ahead of the festive season, indicating a sustained economic recovery, and retail inflation accelerated in September as the base effect waned.

In August, the Index of Industrial Production (IIP) rose 6.4%, a three-year high, compared with 4.1% in the previous month. Retail inflation quickened to 4.41% in September from 3.74% a month ago as prices of pulses jumped 30%.

Analysts polled by Reuters had been expecting factory output to grow 4.8% in August and consumer inflation to rise 4.3% last month.

Manufacturing output grew by a robust 6.9% in August; electricity generation and mining output also picked up pace to grow at 5.6% and 3.8%, respectively.

Inventory build-up ahead of the festive season in October-November should provide a sequential boost to output of manufactured goods, particularly consumer durables, contributing to the pickup in factory output relative to the 2.6% increase in September last year, said Aditi Nayar, senior economist at rating agency Icra Ltd.

“A shift in the festive calendar would impact the number of working days in October and November in 2015 as compared to last year, introducing noise in the growth rates for the manufacturing and mining sub-sectors," she added. “In our view, a favourable base effect (2.7% contraction in the IIP in October 2014) is likely to result in a temporary spike in IIP growth in October 2015."

Production in the volatile capital goods sector, which indicates investment demand in the economy, grew 21.8% in August. Consumer goods output rose 6.8%, driven by higher production of durables like motor vehicles and furniture.

Production of consumer non-durables, which include packaged personal care goods and daily necessities, grew by a paltry 0.4% during the month. 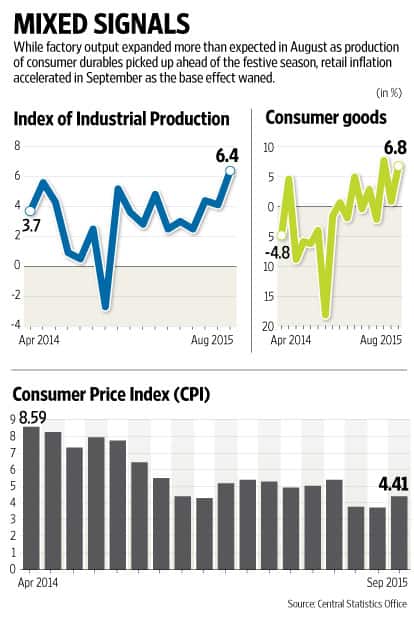 According to data released by the lobby group Society of Indian Automobile Manufacturers on Thursday, the pace of growth of passenger car sales also picked up to grow 9.48% in September, up from 6% in August.

Citing a strong 35.8% increase in indirect taxes in the first half of the fiscal year (April-September), the finance ministry has claimed that a robust economic recovery is underway.

Care Ratings chief economist Madan Sabnavis said the cumulative IIP growth of 4.1% for the five months to August augured well for industry and if maintained, industrial growth could average 5% this year.

“The ultimate test for the recovery in manufacturing will be reflected in corporate results for the Q2 (second quarter)," he added.

The finance ministry has indicated that economic growth this year would be around 7.5%, though it is yet to formally revise its growth projection of a minimum 8.1% expansion in 2015-16.

Most private and multilateral institutions have cut their growth projections for India. The International Monetary Fund, in its latest World Economic Outlook, said India’s growth in 2015-16 will remain flat at last year’s level of 7.3%. Earlier, it had projected growth to be 7.5%.

Moody’s Investors Service, too, lowered its growth estimates for India by half a percentage point to 7% for 2015-16, while Singapore-based commercial bank DBS Group Holdings Ltd reduced its estimate to 7.4% from 7.6% for the same period.

Reserve Bank of India (RBI) governor Raghuram Rajan, in his 29 September monetary policy statement, said a tentative economic recovery is underway, which is still far from robust, noting that monsoon rainfall had been deficient by 14% although foodgrain production was expected to be higher than last year.

RBI on 29 September lowered its benchmark interest rate by a higher-than-expected 50 basis points to a four-year low, seeking to ease borrowing costs and stimulate economic growth by taking advantage of slower inflation.

Rajan had predicted that inflation is likely to accelerate from September for a few months as favourable base effects reverse.

“It is important that pro-active supply-side management by the government be in place to head off any food price pressures should they materialize, especially in respect of onion and pulses," he said.

Surveys conducted by RBI suggest a moderation in consumer confidence and a lower level of optimism in industry. Inflation expectations, though, remain in double digits for the second quarter running.

“Inflation jumped up but RBI expected such a (upward) normalization in inflation. RBI is likely to keep the repo rate unchanged rate at least until early 2016... We believe the RBI too won’t overemphasise this strong IIP print to assess growth, (except) to the extent that it is moving in the right direction," it added.