Bangalore: The population density in Bangalore has risen 47% in the past decade as job opportunities and economic growth have lured people from across the nation to India’s Silicon Valley, the latest census data shows.

The number of people living per square kilometre in the city has increased to 4,378 in 2011 from 2,985 in 2001, according to the census data released on Wednesday by Karnataka’s directorate of census operations.

“Bangalore towers above every city in the state thanks to economic growth, which is attracting people from across the state and India," said the director of census operations of Karnataka, T.K. Anil Kumar. “One in every six persons in Karnataka lives in Bangalore."

Population density in tier II cities such as Mysore, Belgaum, Mangalore, Bellary and Shimoga has declined.

“The increased growth in population is a result of adding six new fringe areas to Bangalore. The city growth is touching the rural borders," said T.N. Bhat, an assistant professor at the Institute for Social and Economic Change (ISEC).

Seven neighbouring city municipal councils, a municipal town and 110 villages were merged into Bangalore in 2007. 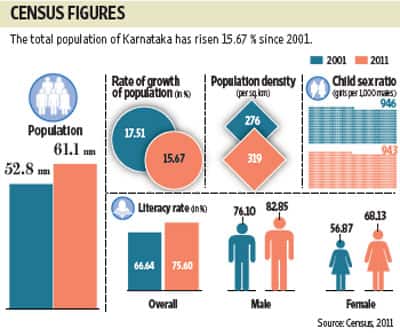 “Anything below 900 is alarming and Bangalore almost appears to be in the category. However, since it is stagnant, there is no cause for worry," said K.S. James, head of the population research centre at ISEC. “The average sex ratio is around 950 in India."

The literacy rate of the state has increased to 75.6% in 2011, ranking it ninth in India, from 66.6% in 2001. As for overall population growth, Karnataka has shown a decline compared with that of the previous decade. The state’s population rose 15.7% in the past decade compared with the 17.5% increase from 1991 to 2001. The growth is also slower than the national increase of 17.6% in the past decade.