The average Indian may go through his entire life without contributing a huge amount to the world’s production of greenhouse gases, but in death his carbon footprint jumps.

Alarmed by the fuel-intensive nature of the funeral rites of Hindus who practise open-air cremation using firewood, an environmental group in New Delhi is promoting a new, more eco-friendly pyre.

“Our faith tells us we must do our last rites in this way," said Vinod Kumar Agarwal, 60, a mechanical engineer who has developed a raised pyre that cuts the amount of wood required and ensuing carbon dioxide emissions by more than 60%.

Hindus believe that burning the body entirely helps to release the soul in a cycle of reincarnation that ends only with salvation. 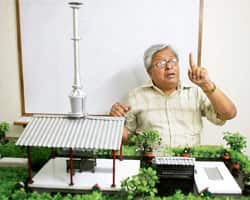 The Mokshda Green Cremation System is the brainchild of Vinod Kumar Agarwal, who hopes the project will be registered under the Kyoto Protocol’s clean development mechanism.

UN figures show close to 10 million people die a year in India, where 85% of the billion-plus population are Hindus who practise cremation.

That leads to the felling of an estimated 50 million trees, leaves behind half-a-million tonnes of ash and produces eight million tonnes of carbon dioxide each year, according to research by Agarwal’s Mokshda environmental group.

Agarwal first got the idea for what he calls the Mokshda Green Cremation System after an unpleasant experience in 1992 at Haridwar on the banks of the river Ganges.

While attending a funeral in the northern Indian city, considered holy by Hindus, Agarwal said he saw a poor family struggling to carry out a cremation with sparse damp wood. The fire went out repeatedly and the partially burnt corpse was finally flung into the Ganges.

“This is the river whose water we bring home for praying," said Agarwal, referring to the belief that the river confers salvation on those who bathe in it. The engineer thought there had to be a better way.

Agarwal said it should take only 22kg of wood to cremate the average human body. But Hindu funerals often use much more because of inefficient combustion.

A formal Hindu cremation—in which a dead body is burned for more than six hours in a three-foot high open-air pyre—can consume more than 400kg of wood to reduce the body to ashes, he said.

That much wood costs about Rs1,300, so poorer families sometimes try to get by with much less and end up having to dispose of partially burnt bodies, or even whole corpses, in rivers.

In 1993, Agarwal built his first pyre, a raised human-sized brazier under a roof with slats that could be lowered to maintain heat. The elevation allowed air to circulate and feed the fire. Unlike electric crematoriums, however, Agarwal’s pyre still allowed family members to congregate to perform last rites. “But no one used it," said Agarwal, even though it needed only about 10kg of wood and reduced the burning process to two hours.

Consultations with priests, bureaucrats and environmentalists led to major design modifications. Agarwal settled on a system four years ago that included finer touches such as marble flooring and a statue of the god Shiva.

Literature for the unit dropped references to the use of iron after priests pointed out that the metal was considered inauspicious because of its association with “the dark force".

The latest model also has a chimney that traps much of the particle matter produced by the fire and releases clean emissions.

Since then, the Mokshda group has been actively promoting it across the country. Mokshda has installed 41 pyres, while some cities, including India’s financial hub Mumbai, have independently adapted the design. The group expects to put up about 20 more pyres this year.

In Faridabad, 30km from the Capital, 15 of the 75 cremations carried out each month at one cremation ground are performed on a Mokshda unit.

“It is good from the religious point of view and also from the point of view of the pocket," said Amir Singh Bhatia, who runs the city’s Seva Samiti Swarg Ashram cremation ground.

Mokshda hopes its projects will eventually be registered under the Kyoto Protocol’s clean development mechanism, which encourages green projects in developing countries. It allows industrialized countries that have committed to reducing emissions of greenhouse gases to count reductions achieved through investments in projects in developing nations towards their undertakings.

More than a third of the 674 carbon credit schemes currently registered are located in India, producing about 15% of the mechanism’s certified emissions reductions.

“We are in talks with a UK-based carbon broker" on whether the pyres can deliver carbon credits, said Anshul Garg, who develops new projects for Mokshda.

Money from the credits would enable the scheme, which is mainly supported by the Indian forest ministry and also has some backing from the United Nations Development Programme, to become self-financing, he said.

But Agarwal believes it will take at least a generation to entirely convert Hindus to the new funeral pyres that he hopes will lead to salvation—though not solely of a spiritual sort.

“My main mission is to save humanity," said Agarwal. “To save trees for mankind, for the coming generations."