New Delhi: India may lose the “fastest growing major economy" tag to China in 2016-17 with the International Monetary Fund (IMF) lowering India’s growth forecast for the year by a full percentage point to 6.6% because of disruption caused by the government’s move to invalidate high-value currencies.

In its update to the World Economic Outlook (WEO) released in October, IMF said India is likely to grow 6.6% in 2016-17, against its earlier estimate of 7.6%. IMF said the Chinese economy grew by 6.7% in 2016 as against the previously projected 6.6%. China’s growth forecast in 2017 was raised to 6.5% from 6.2% projected in October due to “expected policy stimulus". The Fund follows calendar years for most countries, but the April-March period for India.

ALSO READ | India will be the fastest-growing economy in 2017, despite note ban: Moody’s

India’s economic growth is likely to decelerate to 7.1% in 2016-17 from 7.6% the previous year, chiefly due to an industrial slowdown, the government’s statistics department said earlier this month, sidestepping the possible impact of demonetization. 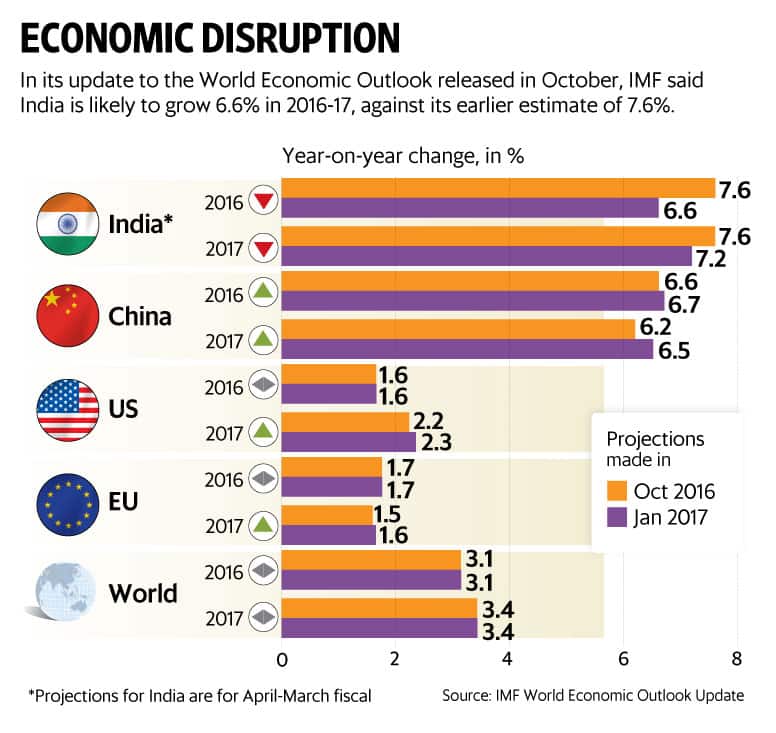 “In India, the growth forecast for the current (2016–17) and next fiscal year were trimmed by one percentage point and 0.4 percentage point, respectively, primarily due to the temporary negative consumption shock induced by cash shortages and payment disruptions associated with the recent currency note withdrawal and exchange initiative," IMF said.

Andreas Bauer, senior resident representative of IMF in India, said the downgrade for 2016-17 was because growth in the first half of the fiscal year was slower than the Fund’s expectations, as well as demonetization. “We expect the impact of demonetization will gradually dissipate in 2017-18 and there will be a recovery in economic growth," he added.

Moody’s and its Indian unit Icra Ltd on Monday said India’s gross value added (GVA) growth at basic prices will ease in 2017 to about 6.6% from around 7% in the 2016 calendar year, with a likely pick-up in the second half, as the economy readjusts after the invalidation of old Rs500 and Rs1,000 banknotes in November.

IMF said while the balance of risks is viewed as being to the downside, there was also an upside to near-term growth. “Specifically, global activity could accelerate more strongly if policy stimulus turns out to be larger than currently projected in the United States or China. Notable negative risks to activity include a possible shift toward inward-looking policy platforms and protectionism, a sharper than expected tightening in global financial conditions that could interact with balance sheet weaknesses in parts of the euro area and in some emerging market economies, increased geopolitical tensions, and a more severe slowdown in China," it added.

It increased its estimate of US growth by 0.1 percentage point this year to 2.3% and by 0.4 percentage points to 2.5% in 2018, on the back of a possible stimulus by the Trump administration.

Moody’s said that after a temporary dampening effect on consumption and investment in the medium term, demonetization will likely strengthen India’s institutional framework by reducing tax avoidance and corruption.

“Even after the currency in circulation is replenished, we expect that India’s economic growth will stabilize with a lag, while remaining strong," said Aditi Nayar, an Icra principal economist.

Icra also said that the loss of incomes in some sectors and deferral of consumption are likely to weigh on capacity utilization, delaying corporate capacity expansion plans.

“And, the extent of capital spending budgeted by the central and state governments for the fiscal year ending 31 March 2018 will affect the extent to which infrastructure spending can stimulate growth in a non-inflationary manner," Moody’s said.

“Nevertheless, economic and institutional reforms already introduced and potentially forthcoming, continue to offer a reasonable expectation that India’s growth will outperform that of its similarly rated peers over the medium term..," William Foster, a Moody’s vice-president and senior credit officer, said.