Congress may capitalize on BJP woes

Bangalore/Hubli: Tamanna Jannappa Narasinganavar is clueless about how his family will vote in the election to the Karnataka state assembly on 5 May. And the Narasinganavars are no ordinary family: there are 200 members with more than 100 registered voters.

The 97-year-old head of Asia’s largest joint family in Lokur village in Karnataka has a soft corner for B.S. Yeddyurappa, former chief minister and one of the prominent Lingayat leaders in the state, who broke away from the Bharatiya Janata Party (BJP), but the younger lot want to vote Congress.

“We live under one roof, we eat from the same kitchen and everything we have, including what we get from the 270 acres of farmland, is common property. But when it comes to votes, the more than 100 votes in the family are divided," said Tamanna’s 86-year-old brother Bimanna Chinnappa.

In many ways, the fragmentation of the joint family’s votes reflects the complex political narrative of the state headed for its 14th assembly election. Not only do voters have to juggle the traditional pressures of caste and religion, they will also have to weigh how their local candidate can best serve their newly acquired aspirations. The broad expectation is that with the BJP having self destructed, the Congress will be the likely beneficiary, provided of course that it can overcome internal dissensions.

Lokur is in northern Karnataka, which has been a bastion for the BJP for almost a decade, since the party sought to expand its national footprint. It was crucial for the party in the 2008 election, as it was for Ramakrishna Hegde in the early 1980s and Veerendra Patil in 1989. The region contributed heavily to the Yeddyurappa-led BJP’s victory in 2008—the party won 56 of its 110-seat tally from the region—that made it the first government formed in the south by the party. 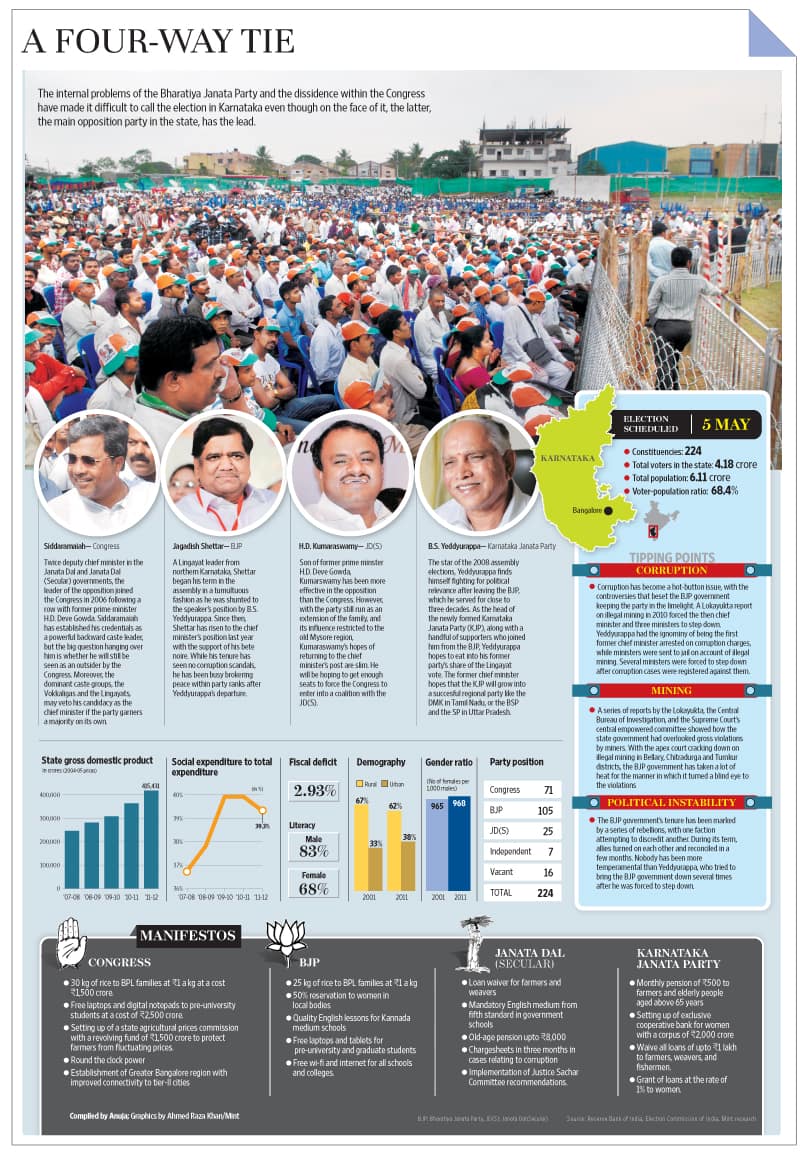 Chief minister Shettar, en route to Hubli, said: “There is an element of anti-incumbency. However, the BJP government’s performance will definitely help us to overcome it. Northern Karnataka is crucial for the BJP. The party will draw its strength from there."

Shettar did not view his former colleague as a threat. “Yeddyurappa won the election on BJP ideology. What’s his ideology for breaking away from the party and forming another. People have identified him with the BJP and they will not back him without the BJP," Shettar said confidently.

BJP’s Joshi, though mindful of Yeddyurappa’s support, was confident of the BJP’s chances. “Yeddyurappa is a mass leader. We have sacrificed persons for principle. We have proved that we will not compromise when it comes to corruption," he said. Yeddyurappa resigned as chief minister in July 2011 following charges of corruption in mining deals and land deals.

With its 110 seats and the support of six independent candidates, the BJP was able to form the government.

Sensing that dependence on the independents could tie its hands in governance, the party forced seven legislators from opposition parties to resign and re-contest on a BJP ticket. Five of them won, giving the BJP a majority.

Five years on, the picture appears to be vastly different.

“The BJP’s performance in coastal Karnataka, southern Karnataka and even in urban Bangalore, which has 28 seats, is not likely to be good," said a political observer, who didn’t want to be named.

Meanwhile, another splinter group— the Badavara Shramikara Raithara (BSR) Congress led by former BJP leader B. Sriramulu—is contesting in 124 seats. That could split the BJP’s support base in the areas in and around the mining district of Bellary.

Politics in Karnataka has always revolved around caste. The BJP was able to make its debut in the south because of the overwhelming backing of the powerful Lingayat community, accounting for 17% of the population. With Yeddyuruppa’s exit, this vote is divided and the Congress is looking to exploit the opportunity.

Similarly, the other influential section, the Vokkaligas, accounting for 15% of the population, constitutes the support base of the JD(S). Other backward classes (33%), Muslims (10%) and scheduled castes and scheduled tribes (23%) are considered to be strong supporters of the Congress.

“Definitely, he (Yeddyurappa) is a very strong leader among Lingayats, so already 40-50% votes have been shifted to the KJP," said Nagaraj Kulkarni, a college student in Hubli.

“It is unfortunate but in Karnataka, caste plays a key role," he said. “Voting will take place on the basis of caste. It happened in the past too, but was never highlighted in such a big way. The main factor is Yeddyurappa. What (Narendra) Modi is to Gujarat, Yeddyurappa is to Karnataka."

“Congress does not have a prominent leader from either of the powerful communities, neither from the Lingayats nor from the Vokkaligas. If these two leading communities vote on caste lines, the party will struggle to put up a good show," said a Congress leader from the state who is contesting the election.

However, Neena Gopal, resident editor of Deccan Chronicle, said: “The Congress has a strong Vokkaliga leader in S.M. Krishna and a strong Lingayat in Shamanur Shivashankarappa but has not projected either in the belief that the OBC, minority votes matter more."

While one of the Congress party’s contenders for the chief ministerial post, Siddaramaiah (who uses only one name), is a Kurba, state unit president G. Parameshwar and Union minister Mallikarjun Kharge belong to scheduled caste communities.

“The fact that the BJP and Yeddyurappa lost their credibility would play in favour of the Congress. Vokkaligas or Lingayats never voted en masse for the Congress. If they were consolidated it would have damaged the Congress," said Sharan Prakash R. Patil, a two-term Congress legislator contesting from Sedam. Patil said there was a trend among the electorate to vote for a “stable and better government". He added: “The youth, which is around 40% of the voters, want to teach them a lesson. They are disappointed with the BJP," he said.

The Congress, which was considered a surefire winner by poll pundits especially after its impressive victory in the recently held urban local bodies’ elections, is not so confident of a clear majority now. Part of the reason has been infighting, especially with the Congress refusing to identify a chief ministerial candidate ahead of the polls.

A lot of attention has been given to the spat between former chief minister S.M. Krishna and former Union minister M.H. Ambareesh, both Vokkaliga leaders, who have been at loggerheads over giving tickets to their candidates.

The party appears to have sided with Ambareesh and Krishna, while campaigning for a few candidates close to him, has largely been absent from party activities. Krishna also skipped the release of the manifesto and later criticized the party for nominating candidates with criminal records and a record of failure in previous elections.

However, analysts believe that the Congress party holds the edge.

“Its position on counting day will be decided by whether it can turn an anti-incumbency wave into a positive vote for itself," said political analyst Sandeep Shastri.