1. Cooling off: Summer in Kolkata peaks in May—with the temperature going up to 40.5 degrees Celsius this year. Many prefer to sleep on roofs rather than their stuffy homes. One such rooftop packs in the Howrah Bridge in the frame. 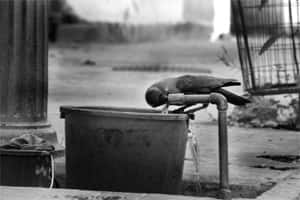 3. School vacations translate into groups of children playing cricket on every street corner and empty field. Here, children play in the bed of a dried-up water body in Madhyamgram, a suburb of Kolkata.

6. The Writers Buildings, the state government secretariat, wears long curtains of khus (vetiver) in summer as an indigenous way to fight summer. The sheets of khus are sprinkled with water to act as a cooling filter.

8. A woman fans herself with a hand-made straw fan popular in West Bengal.

9. Assorted clubs and religious groups run charitable water booths, or ‘jalachhatras’ to supply clean drinking water to the public. One such booth in Boro Bajaar, a bustling marketplace in North Central Kolkata.

10. A crow serves himself from a leaking tap.

11. Children cool off under running water.