New Delhi: India raised iron ore export duties to 30% from 20% as it seeks to conserve supplies for its own steel industry, sending down shares of iron ore producers and boosting those of steel makers.

The government issued a formal order removing the previous 20% duty, and two revenue officials said this meant the rate reverted to 30%, which one of them said was the “peak tariff" level. 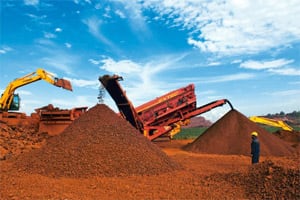 Drying exports: India is one of the world’s biggest exporters of iron ore, with much of its product bought by China, which has the world’s largest steel industry. Photo by Aniruddha Chowdhury/Mint.

“This move appears to have been taken to appease the country’s steel lobby, which has been demanding such a hike," Sharma said.

India is one of the world’s biggest exporters of iron ore, with much of its product bought by China, which has the world’s largest steel industry.

Exports from Asia’s third largest economy have fallen sharply due to increases in taxes and freight rates, while shipments from Karnataka state, one of the country’s biggest producers, have stalled over a legal wrangle.

The move will further dry up exports from India, which fell 28% to 40 mt in April-November, Sharma said.

Chinese steel mills had been expected to replenish stockpiles before their New Year holidays, which start on 22 January. Chinese markets are closed on 2 January.

China’s iron ore imports are expected to rise 6% to a record 720 mt in 2012, according to a Reuters poll conducted in December.

India’s government is trying to cut down on illegal iron ore mining and shipments, but favours better tracking and monitoring along with higher taxes rather than blanket bans on exports. It last raised the export duty in February 2011.

In April, the Supreme Court overturned an export ban imposed by Karnataka’s state government in July 2010 but shipments have yet to pick up because of administrative delays.

The court has itself banned mining in some parts of the state due to environmental degradation and allegations of illegal mining, allowing NMDC only to mine in the areas.

Mayank Bhardwaj and Abhijit Neogy contributed to this story.