New Delhi: One night in April, Kailash Chand and Narpat Singh went out looking for girls. They found what they wanted inside a black Mahindra Scorpio parked outside the Saket Metro station and agreed to pay ₹ 5,000 each for Kushi and Rashmi. They were then offered rooms for ₹ 2,000 each, which they accepted.

Chand and Singh were driven to a flat 10 minutes away, in Anupam Enclave. There, they met the madam; a small, handsome woman with striking black eyes, sharply drawn features and well-defined brows. They also met two more girls. Chand slipped out shortly after, saying he’d be back soon. Once outside, he signalled to a waiting posse of policemen who moved in and arrested the madam and the girls. 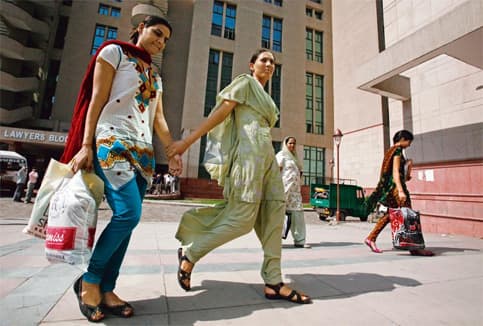 In custody: Sonu Punjaban (left) at the Saket district court in April. Punjaban was arrested in a sting operation in south Delhi in April. Photo Javeed Shah/Mint

The arrest was carried out by sub-inspector Parveen Kumar, who had played the decoy in Punjaban’s first sex-trade-related arrest in 2008. She had then been charged under the Immoral Traffic Prevention Act, had posted bail of ₹ 10,000 and was out of prison in a few days.

This time around, Kumar wanted to charge Punjaban under the Maharashtra Control of Organised Crime Act (MCOCA), a stringent law requiring proof of a criminal syndicate and at least two previous charges “in the nature of organized crime". This way, Punjaban wouldn’t be able to escape prison, Kumar reasoned.

“I’m sure that we’ll get her—it’s just a formality really," he said a few days after her arrest. Punjaban applied for bail, it was denied and she is currently in judicial custody in Tihar jail. Mint couldn’t speak with Punjaban for this story.

Punjaban’s real name is Geeta Arora. Born in 1980 in Haryana to a Punjabi household, she finished high school and went to work for a beautician. At 17, she married Vijay, a carjacker and gangster, and moved to Delhi. In 2004, Arora conceived a son by Vijay, but he was killed in a police encounter before the boy was born. Arora’s father died soon after, leaving her and her younger siblings with no income. It was then that she joined the sex trade.

That is where the story, culled from a police statement given by Punjaban herself, and conversations with her acquaintances, becomes sketchy.

Three years after entering the sex trade, Arora had reinvented herself as Punjaban. By then, she had married twice more, to brothers Deepak and Hemant. Both men were killed in police encounters. In 2008, she bought the Anupam Enclave flat and rented other properties in south Delhi, although none bear her name, as pointed out by her lawyer at the beginning of her trial.

Her name appears to be a combination of the alias of Hemant (Sonu) her third husband, a gangster who was killed in a bloody encounter with the police in 2006 and her Punjabi roots.

The alias suits her. It conjures up a seductive image of something at once decorative and dangerous—a powerful name for a powerful woman. Punjaban seems accustomed to giving orders and speaks to lawyers and policemen with the same commanding assurance as she does to her family and associates; head thrown back, she scans faces with a quick, appraising glance.

Among the people who work for her, Punjaban is something of a legend, inspiring a mixture of awe and incredulity. One man, who worked as a pimp and agent for her for five years, but did not want to be identified, admits that he is still scared of her. “She is a very rough lady; you cannot predict her behaviour. She can abuse you, slap you, (do) whatever she likes."

Punjaban was an aggressive and domineering employer, he says, interfering in his family disputes and demanding absolute loyalty in return.

“Lately, over one year or so, she has become very arrogant," he says. “Power has gone to her head. After Icha Baba was busted, a lot of his gang managed to find places in her inner coterie and she started ignoring us. She likes sycophancy and new faces."

Icha Dhari, known as Icha Baba, was one of Punjaban’s biggest rivals in the sex trade until last year, when he was arrested under MCOCA. Coincidentally, their hearings happened on the same day at Saket’s designated MCOCA court. As Punjaban left the courtroom, the two crossed paths, Dhari towering over her in a white dhoti with his long, oiled hair tied in a ponytail. The top of Punjaban’s head barely reached his shoulder as she walked straight past him out of the courtroom without a gesture of acknowledgement. Icha Baba stared.

Sex and the middle class

Traditionally, prostitution in India has been practised by two groups: brothel workers and high-class escorts. A government-commissioned study estimates that the number of sex workers in India rose from two million in 1997 to three million in 2003-04, the majority working for negligible pay in near captivity. The escorts, much smaller in number, charge up to ₹ 2 lakh an hour from the ultra-rich, according to a New York Times report of 2008.

Punjaban’s business didn’t come from either of these two ends. Her girls cost ₹ 5,000 a go. A register, snatched during a police raid at her home, details that she paid some girls a contract wage of ₹ 50,000 a week. She moved girls from house to house in vehicles that were expensive, but not overtly flashy. Most importantly, she managed to tap into an emerging market of customers: middle-class men with disposable cash and new-found freedom to spend time away from home. It was to this growing segment that Punjaban shrewdly pitched her business.

Kumar said that this targeting was intentional and specific. “Her clients weren’t the mega rich, but she has a hold on the middle-class segment of the trade—and the middle class is the largest growing section," he added.

Punjaban’s pitch was smart and timely.

“In the new millennium, Delhi is a changed city in terms of its sexual realities," said Abhay Kumar Dubey, a fellow at the Centre for the Study of Developing Societies in Delhi, who has studied the sexual revolution in Indian metros. “The advent of globalization has changed attitudes. When people migrate to Delhi they enjoy advantageous, liberal conditions. In their hometowns they were monitored by their families."

Freed from constraints, the possibility of sexual adventure becomes real, he added. And Punjaban was only too happy to dole this out—at a price.

Punjaban operated solely in the world she had singled out as her market. She used the trappings of the middle class—the new malls where people spend weekends, the Metro stations from which they travel to work, the farmhouses some rent for parties. Her success in a competitive and cut-throat trade is partly attributable to this business sense and partly to her long experience in the gang culture in and around Delhi.

And she knew how to work with the police.

At Anupam Enclave, one of her neighbours recognized her soon after she moved in; former police officer C. Chauhan knew Punjaban from the days when she’d been associated with Hemant (the couple were arrested in a murder case in 2005; Punjaban was later acquitted.)

Chauhan said Punjaban knew how to handle the police. “‘Every day the police would come," he said. “It was an open secret (in the area)." He also claims that Punjaban played a role in passing information to the police that led to the encounter deaths of her husbands. “She can’t just be tied to one person," he said. “She’s like that."

It may be difficult for the police to pin down reliable evidence against Punjaban. Although she has admitted to working herself in the sex trade and supplying girls to others, the police need to prove that her activities amount to organized crime.

The fleet of cars she’s supposed to own are registered in the names of her mother, sister-in-law and brother. The rest were being rented on a monthly basis.

After a mere 10 minutes of her case’s first hearing in the Saket district court in April, justice R.K. Nath expressed doubt over whether Punjaban’s activities could be construed as a criminal syndicate under MCOCA. “Where were her accomplices?" she asked. The police had no answers then, but they might now.

On 13 July, they busted another prostitution ring operating out of a south Delhi apartment. This one too was being run by a woman, 27-year-old Ariba. Her accomplices were two men, both cousins of Punjaban. That could bolster the prosecution’s case against Punjaban herself.

Still, it’s not certain whether the charges will stick under the complicated provisions of the organized crime law. It’s been more than three months since Punjaban’s arrest and Kumar and his team have been granted a further 90 days to put together a case against Punjaban and file a chargesheet. Otherwise, she could walk out of Tihar jail by the end of September.