Indian economy a worry for Modi govt in election year

The Central Statistics Office (CSO) has projected India's GDP growth rate at 7.2% in 2018-19, implying that the Indian economy will grow at 6.8% in the October-March period after posting 7.6% growth rate in April -September

New Delhi: India’s $2.7 trillion economy is headed for a slowdown ahead of 2019 Lok Sabha elections due by May, with a federal statistics body projecting an overall economic growth of 7.2% for the year ending 31 March. With the economy already recording 7.6% GDP growth in the first half (April-September) of the fiscal, this implies it will grow at around 6.8% in the second half (October-March).

The Central Statistics Office (CSO) on Monday released the first advance estimates for the current fiscal, mainly for the finance ministry to use as a base for calculations in the interim budget to be presented on 1 February. CSO’s 7.2% figure is slower than the Reserve Bank of India’s estimate of 7.4% growth in its latest monetary policy. However, it would still be faster than the 6.7% growth clocked in 2017-18. 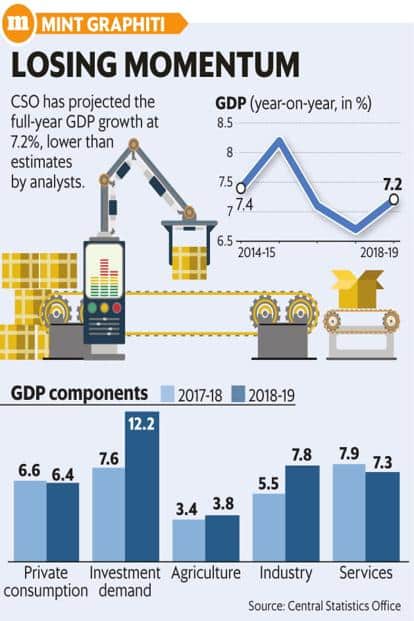 What could drag down growth in the second half is the government’s inability to boost growth as fiscal deficit in the first eight months of the year (April-November) has crossed 112% of the full-year target. Higher public expenditure, both by states and the centre, had buoyed growth in the first half of the year.

Union finance minister Arun Jaitley has committed to meet the fiscal deficit target of 3.3% of gross domestic product (GDP) in 2018-19, despite a significant revenue shortfall and populist demands in an election year.

While the shortfall in goods and services tax (GST) collections is expected to be partly met by the higher-than budgeted growth in direct tax collections, it is unlikely to make up for it. Data released by the finance ministry on Monday showed net direct tax collections till December had touched 64.7% of the full-year target of ₹ 11.5 trillion, growing at 13.6%. While the government has targeted ₹ 1 trillion GST collections every month, the figure was crossed only twice—in April and October—and during the first nine months of this fiscal.

However, CSO’s estimate of nominal GDP growth at 12.3% for 2018-19 against the finance ministry’s assumption of 11.5% for the same year will help the government meet the fiscal deficit target of 3.3% of GDP despite the revenue shortfall.

Madan Sabnavis, chief economist at Care Ratings Ltd, said these numbers must be read with caution as the methodology clearly says that these are extrapolations of existing data on various sectors, which could range from six to eight months. “Therefore, there is scope for change in these numbers when the actual numbers are reckoned. The Q3 results in February (end) will throw more light on the final outcome," he added.

Ranen Banerjee, partner (public finance and economics) at PwC India, said the estimates seem to be on the conservative side. “The final numbers would depend on three factors—how the oil prices pan out and hence inflation, pre-election last-quarter government spend and the mood of the economy post conclusion of US-China trade negotiations," he said. “The nominal GDP has been estimated at 12.3%. That is surprising given the muted inflation outlook."

The positive takeaway from CSO’s GDP advance estimates is the sharp acceleration projected in investment demand as represented by the gross fixed capital formation, which is estimated to grow 12.2% in 2018-19 from 7.6% a year ago.

Sandip Somany, president of industry lobby group Federation of Indian Chambers of Commerce and Industry (Ficci), in an interview said the investment cycle should start kicking in during the course of this year. “Aggregate industry capacity utilization has now reached 70-75%. So, Indian industry without investment can service its customers now for one year or 18 months at most. Most industries will have to start putting in money and expand capacity; otherwise they will run out of capacity," he added.

While agriculture and manufacturing are set to see acceleration in 2018-19, CSO projected the services sector to decelerate during the year ending 31 March.

Subscribe to Mint Newsletters
* Enter a valid email
* Thank you for subscribing to our newsletter.
Topics
budget-2019 mint-india-wire
First article
Close
Recommended For You
Feedback
Select your Category
Your Message
No Network
Server Issue
Internet Not Available