Sultanganj, Bihar: Sitting on his father’s shoulders, two-year-old Rahul Kumar giggles and tugs on a lock of his father’s hair.

A happy, healthy-looking boy, Rahul has already seen much of India. Born in a small village in northern Bihar, he has spent roughly half of his short life in Punjab, where his parents work as seasonal farm labourers. He has spent a few months in his parents’ village. The rest has been spent on road and rail.

You wouldn’t know it to look at him, but this small giggling child—and thousands of other migrant children like him—represents one of the biggest challenges to India’s polio eradication campaign. 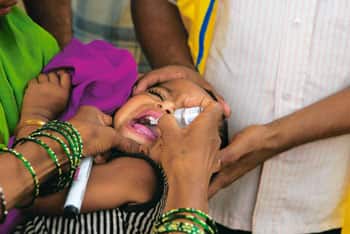 A child is given polio drops at the Shravani mela

In order for children to be 95% immunized against poliovirus, they need to receive eight doses of the vaccine before the age of one. Now well past his second birthday, Rahul has received only six doses. Should he come into contact with the dangerous Type 1 poliovirus, he could easily catch it. And because he’s constantly on the move, there’s an even higher risk that he could spread the disease.

“They are vulnerable to polio because they often miss immunization and their mobility facilitates spread of poliovirus. Their large numbers and mixing, especially in large metros, help sustain poliovirus transmission; their return poses a risk for reintroduction of virus back into high-risk states where polio has been stopped after intense vaccination efforts," he adds.

A virus transmitted primarily through contaminated food and water, polio invades the nervous system and can cause irreversible paralysis in a matter of hours. It thrives in environments with poor sanitation, and can spread to others before a case is even identified. Unlike other epidemic-causing viruses, the polio virus is virtually invisible. Many of the children who contract the disease are asymptomatic; only 1% will become paralysed. Even then, the only way to know whether the paralysis was caused by poliovirus is to ship a stool sample to a lab to be tested, which can take two weeks.

By the time a polio case has been identified, many other children in the area may have already been infected.

Despite such challenges, India—one of four remaining countries in which polio is endemic—finally appears to be winning the battle against polio.

Total polio cases (Types 1 and 3) have dropped from 284 at this time last year to only 33 this year. The numbers of genetic strains of Type 1 polio have also dropped—from seven distinct families in 2007, to just one in 2010. Nor are cases—when they do occur—nearly as geographically widespread as they were even a year ago.

Perhaps most significantly, for the first time in the history of the campaign, India’s two remaining endemic states—Bihar and Uttar Pradesh (UP)—were simultaneously free from Type 1 poliovirus (also known as P1) for more than eight consecutive months until last week, when a single Type 1 polio case was identified in northern Bihar.

“Bihar is the epicentre of the P1 virus," said Yameen Mazumder, the chief of the field office in Bihar with Unicef (United Nations Children’s Fund). “Of all the P1 cases in India, the vast majority have a genetic link to Bihar." An awareness booth at the mela.

A study by the Indian Institute of Public Administration estimated the migrant population from Bihar at 5.2 million, much higher than the 3.5 million projected by the National Sample Survey Organisation, and second only to UP.

Migrants are a high-risk group primarily because of their vulnerability. A study published by Anjali Borhade, a senior lecturer at the Indian Institute of Public Health in New Delhi, found that because most migrants work outside the formal economy, they are often missed by public welfare schemes.

Migrants on work sites generally live in tightly packed houses that lack adequate bathroom facilities—if they have them at all. Such conditions are ideal for the spread of disease.

“Sometimes they are denied treatment in healthcare facilities and told to go back to their villages to get treatment," said Borhade. “They often suffer from low self-esteem, and do not always have the courage to ask again."

And their numbers appear to be growing. For polio vaccinators, the mobility, size and relative invisibility of the migrant population pose a very real threat to effectively controlling the spread of the disease.

The programme responds to each new case with immediate and aggressive mop-up campaigns, a rapid response system that involves sending thousands of people to vaccinate tens of thousands of children in the surrounding areas in a matter of days. But these campaigns are less effective on children in transit.

“Because migrants are on the move, they are hard to vaccinate. They are much harder to capture in our disease surveillance," said Jafari. “Many have different health-seeking behaviour—they do not always go to hospitals when they are sick; sometimes they only go to traditional healers, or don’t seek any care outside the home."

In 2007, researchers within the polio programme became aware that migrant children were being missed during rounds, contracting polio at higher rates than the rest of the population, and playing a large role in moving the virus around the country. They adopted an aggressive migrant strategy—aimed at identifying and immunizing India’s growing, often virtually invisible migrant community at their sources, destinations, in transit, and at large gatherings, such as festivals.

The programme was further expanded in 2009, when it became apparent that the vast majority of new polio cases were among or in close proximity to migrant communities.

“The magnitude of the population movement in Bihar poses an extreme challenge," said Mazumder. “The migrant population remains key to polio eradication."

Every year during the month of Shravan, more than six million people come from states all around India, Bhutan and Nepal to Sultanganj, Bihar—one of the places where the Ganga runs north—to take part in the Shravani mela. There they fill small jars with water from the river before trekking 110km to a temple of Lord Shiva in Deoghar, Jharkhand.

It’s an immunological nightmare. The mela is just the first of a series of several festivals in Bihar and UP to take place before the end of the year—and also just happens to coincide with peak transmission season.

Although Bihar has only reported one Type 1 polio case this year, there have been three cluster outbreaks since January, two of which border Bihar. With one exception, all cases were genetically linked to the Bihari parent virus, and were linked to migrant communities.

The dirt road leading to the Ganga in the town of Sultanganj is a chaotic mess of street vendors, bicycle rickshaws and saffron-garbed pilgrims.

Standing off to the side in a yellow vest, Santosh Yadavsa keenly eyes the mass of people walking to and from the banks of the holy river. Though he’s been there for several hours already, there’s no time to relax.

He sees a woman with an infant balanced on her hip, and bolts through the crowd—nearly knocking over an elderly man—and breathlessly taps her on the shoulder. Talking to the woman in rapid Hindi, he explains that he is a polio vaccinator, while checking her son’s finger for the tell-tale pen mark indicating vaccination. Seeing none, he tips the child’s head back and gives him three drops of the bivalent polio vaccine—effective against both types 1 and 3.

From the perspective of a casual observer, it looks like a haphazard process, but India’s polio eradication programme is actually one of most extensive and best coordinated in the entire world.

Yadavsa is just one vaccinator among 438 transit team members placed at strategic points throughout the primary mela routes. He’s accompanied by another man—called a social mobilizer—who pass out fliers to passers-by raising awareness. Additional teams cover 46 transit points along the porous Bihar-Nepal border. The idea is that even if a child is missed at one point, he or she will probably be netted by another vaccinator down the road.

A few hundred yards away, a sunny yellow booth blasts a pre-recorded loop explaining the importance of vaccination from large speakers. This year’s addition is an open van with a large, flat-screen TV that will drive along the route to further raise awareness.

And that’s just the fair strategy. In an effort to reach India’s growing migrant population, the Indian government—in partnership with Unicef, WHO and the Rotary Foundation—are strategically mapping migrant movements, with the aim of reaching them at source, destination and in transit.

The polio programme has identified 161 routes considered the most used by migrant workers. On every round, 250 specially trained teams are dispatched to eight train stations throughout Bihar in order to vaccinate children. Additional teams get on the trains to vaccinate children en route, while others target migrants at workplaces in destination states, such as brick kilns, farms and construction sites.

Even more impressive is the 107 block strategy launched this year. Polio programme officers identified the 107 blocks—41 in Bihar and 66 in UP—that are responsible for more than 80% of India’s Type 1 polio cases over the past six years. Through intensive vaccination, education and sanitation campaigns, the polio programme hopes to kill the virus at its source.

“We are quite hopeful that the strategies adopted will be able to shut down the P1 virus as soon as possible," said Ajay Khera, the deputy commissioner for immunization at the ministry of health. “This is the smallest number of cases we’ve had since 2005. Our efforts appear to be working."

Despite apparent successes, vaccinators aren’t celebrating yet. In 2005, total cases—types 1 and 3—were down to an all-time low—only 62 cases reported by the end of the year. Then in 2006, total polio cases jumped to 648.

“Everyone is sitting here with their fingers crossed," said Deepak Kapur, the chair of Rotary International’s India PolioPlus Committee. “We’ve put in the hard work. It’s too early to celebrate now, but perhaps one little stroke of luck is all that is really needed here to finish off P1 forever."