"storyDirectUrl"
OPEN APP
Home >Opinion >What is behind the regional variation in adult mortality in India?

What is behind the regional variation in adult mortality in India?

There are significant differences in adult mortality across India

India’s crude death rate (CDR)—the number of deaths per thousand people per year—declined from 9 to 7 between 2000 and 2013, as per data from the civil registration system. A falling death rate is often associated with an overall improvement in heath and sanitation. However, drawing such an inference on the basis of CDR can sometimes be misleading because countries with younger populations will tend to have lower death rates. For example, India’s CDR (7) is lower than that of Japan (10). To overcome this anomaly, researchers often use the age-standardized mortality rate (ASMR), which is a weighted average of the age-specific mortality rates, with the weights being the proportions of persons in the corresponding age groups of the World Health Organization (WHO) standard population. WHO data shows that the magnitude of decline in ASMR in India has been similar to that of CDR. India’s ASMR declined from 12.6 in 2000 to 10.5 in 2012.

A paper authored by Usha Ram, a postdoctoral fellow at the Centre for Global Health Research, Toronto, and others, which has been published in the health journal Lancet, shows that these gains might be spread unequally across the country. The study finds significant divergences in ASMR across states. Chhattisgarh, Uttar Pradesh and Assam have the highest ASMRs. The regional variation in adult mortality is not similar to the pattern of child mortality in India, which seems to follow a north-south divide, as has been shown in a dissertation submitted at the University of Texas at Austin.

The authors show that there is low correlation between districts with high child mortality (0-14 years) and those with high mortality among adults aged 15-69 years. District-wise analysis shows that adult mortality risks in the age group 16-169 years was the highest in parts of Uttar Pradesh, Chhattisgarh, Assam and some coastal parts of Karnataka.

A majority concentration of high mortality districts in the eastern part on India’s map makes the authors suggest that there is a slight east-west divide in adult mortality, with western districts faring better than the eastern ones, in contrast to the more north-south divide in case of child mortality. 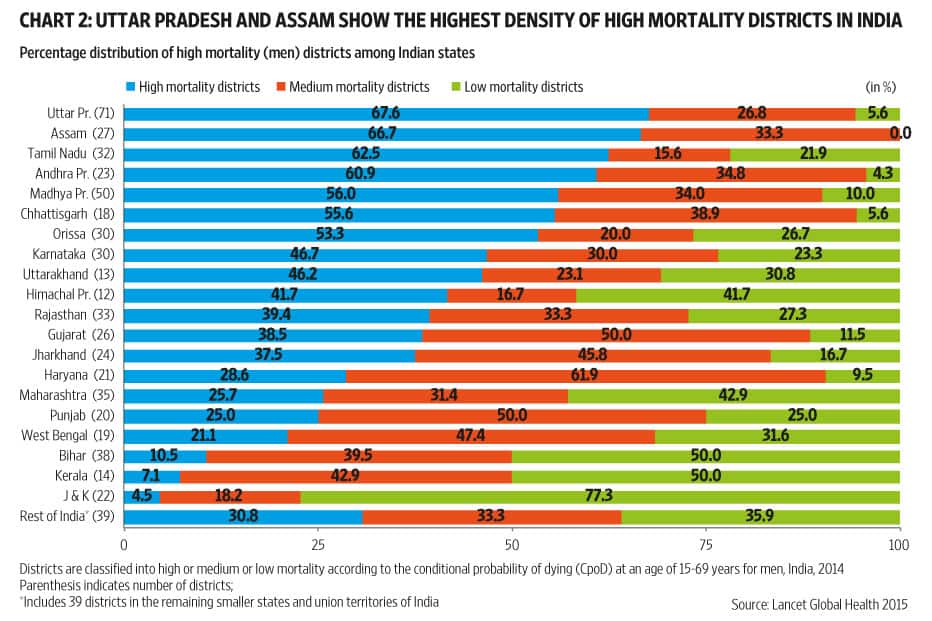 The question arises as to what causes the gap in mortality between various districts. The authors show that deaths due to tuberculosis, vascular diseases, malaria and other infections, and respiratory diseases together contribute around 60% of the gap between high and low mortality districts. In addition, around 5% of the excess deaths among women in high-risk districts were attributed to maternity-related causes. However, the main reasons for variation in adult mortality across districts are not clear. Statistical analysis by the authors suggests that the usual factors affecting mortality, such as district-level poverty, education, public health access, urban location and smoking, did not fully explain the differences across districts. In fact, such correlates could explain only 21% of differences in mortality among men across different districts. In case of women mortality, such factors could explain only 35%. But in case of child mortality, which exhibits a north-south divide, the results are more predictable, with the usual correlates of mortality explaining 57% of differences.

Hence, the authors conclude that “most of the variation in adult mortality could not be explained by known determinants or risk factors for premature mortality", suggesting that further studies are required to identify the reasons behind high mortality in certain districts. The research claims to be the first such study on regional variations in mortality in India. Given the importance of districts in delivery of health services and planning, it is important that the reasons for mortality variations are looked into in greater detail.