India’s exports to Japan halve to $3.85 billion in four years

New Delhi: Amid growing bonhomie between Japan and India —Asia’s second and third largest economy, respectively—lies the dark reality that in just four years, Indian exports to Japan have almost halved to $3.85 billion in 2016-17, from $6.81 billion in 2013-14.

Japanese Prime Minister Shinzo Abe is currently on a two-day state visit to India and aims to further strengthen the strategic partnership between the two countries. Abe was received by Indian Prime Minister Narendra Modi in Ahmedabad. 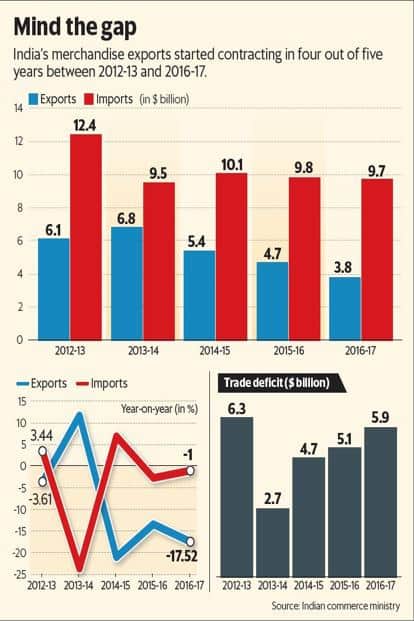 The Comprehensive Economic Partnership Agreement (CEPA) signed by India and Japan in February 2011 and implemented from August 2011 was expected to boost bilateral trade in goods and services. However, India’s merchandise exports started contracting in four out of five years between 2012-13 and 2016-17. As a result, India’s trade deficit with Japan has now widened to $5.9 billion against $2.7 billion in 2013-14. In 2016-17, India’s exports to Japan contracted 17.5%, and its imports fell by 1%.

“The negative or slow growth in trade with Japan is a matter of concern for India, in view of the fact that there is high potential for faster progress on goods and services trade," the Indian embassy in Tokyo says on its website.

Even the foreign trade policy statement 2015-20 released by the commerce ministry alludes to non-tariff barriers faced by Indian exporters. “While on the one hand, the Japanese market has not seen growth in the product areas of India’s interest, Indian business entities are facing problems in market access. These problems can be briefly said to be arising out of language constraints faced by Indian companies in Japan, highly demanding product and service standards, regulations that require business modalities making market access a costly venture, and a relative lack of intensive effort on the part of Indian business," it said.

“The other route of access of India’s export sectors into Japan will require language proficiency, negotiating a simplified framework for market access and continuous trade promotion efforts on the part of businesses and the government," it added.

Bilateral trade in services between India and Japan also remains subdued. India’s exports of IT and IT enabled services to Japan account for less than 1% of Japan’s IT services market and India also has an overall trade deficit in services with Japan unlike the surplus position it has with many developed countries.

“The CEPA sub-committee on services could take up several implementation issues including those relating to expeditious issue of visas for IT and other service providers, clarification of ‘technology services’ in the bilateral double taxation agreement, regulatory issues relating to financial services, particularly insurance and progress on the built-in agenda in CEPA including in respect of nurses and healthcare workers and mutual recognition agreements among professional bodies," said a study of India-Japan trade published by New Delhi-based think tank Research and Information System for developing countries.

Pravakar Sahoo, professor at the Institute of Economic Growth, said the CEPA has been a failure when it came to boosting India’s exports to Japan. “Since tariff lines of Japan were already close to zero, it is India who gave more market access to Japan through significant tariff cuts," he said.

However, Sahoo said Japan has very strict quality controls and Indian exporters need to comply with those regulations to increase exports to this lucrative market.

The commerce ministry plans to run special programmes for trade promotion in Japan in identified sectors like textiles, garments, information technology services, pharmaceuticals, leather products and agro-processed products, according to the FTP statement. Biswajit Dhar, professor of economics in the Jawaharlal Nehru University, said India should look at higher investment from Japanese companies along the Delhi Mumbai Industrial Corridor.

“Building of the DMIC which has been languishing for years needs to be fast-tracked. Industries along the corridor could help us boost investment led exports," he added.