Helping to bridge the language gap

Helping to bridge the language gap

New Delhi: Tan Boon Chin says he translates “voices" for “needy businessmen". This could involve paraphrasing a sewing machine manual for an Indian company sourcing technology from China, or converting technical writing on automobile maintenance from Chinese to English.

By vocation, Tan, a 53-year-old Malaysian, is a Buddhist preacher, but when he isn’t presiding over prayer sessions in his Gurgaon home, he’s translating lengthy tracts on clinical drug trials or lending his voice for corporate presentations. 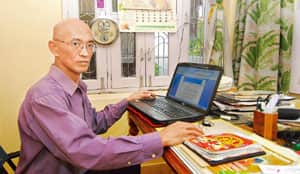 Tan was a teacher in a small town in western Malaysia when he started taking up translation assignments. Soon after, when he followed a Tao mission to India, he brought his language skills with him; he still shuttles between Malaysia and India several times a year. “The job of a translator is one of a facilitator...between cultures and people," he says.

At a time when Indian companies are increasingly stepping out in search of new opportunities overseas, and when foreign companies want localized content, the demand for freelance translators such as Tan is seeing an unprecedented boom.

Previously, the primary occupation available for translators consisted of producing vernacular transcripts of parliamentary proceedings, or working on scholarly works and spiritual tracts. Today’s translators are, however, unravelling top-secret business contracts right out of their homes. They’re widening their services to offer voice-overs for multimedia packages and to act as interpreters in seminars and boardrooms.

Experts say the demand for translators has been growing at 15-30% for the past few years. While requirements for traditional languages such as Chinese, French, German and Spanish remain, newer avenues are opening up in other parts of the world, including in the African continent, where India’s trade ties are set to double in two years.

“Sometimes a technology transfer project could run a bill of more than Rs1 crore," says Ravi Kumar, president of the Indian Translators Association (ITA), a body of linguists and language companies. “Since these matters are sensitive, translators are required to sign non-disclosure agreements."

The majority of translation projects come from the corporate sector, but there is additional demand in other spheres of enterprise, such as scientific papers, litigation, customs clearances, and insurance. “But the biggest emerging potential for language experts is to come from India itself, as it moves towards next generation of development through e-governance," says Kumar.

At present, India’s translation market is fragmented, although it received a strong impetus from voice-based business process outsourcing operations in the 1990s. With exports now expected to cross $200 billion this fiscal, its demand is now more diverse, providing “a fillip to language-support services across all fields", says Shyam S. Maheswari, general manager at New Delhi-based InfoTranstech India Pvt. Ltd. Maheswari and his team handle translations between 120 languages.

Propelled in particular by the automobile industry and medical tourism, translators cater to diverse needs. InfoTranstech recently translated a 2,000-page document for Bharat Heavy Electricals Ltd, which is seeking to expand its African reach. For Maruti Suzuki India Ltd, it translates car manuals from English to Swedish.

At the other end of the industry spectrum are individuals such as Vrunda Deshmukh, a German language expert living in Pune. Deshmukh is often a visiting lecturer at management institutes, and has been translating for companies such as BMW, Volkswagen, Wipro and Infosys for at least 10 years.

As a freelancer, the profession gives Deshmukh freedom and flexible hours, she says. “I work in the comfort of my home. I don’t waste time because I don’t have to travel to work. I don’t have to pay fuel bills."

Some keen competition for Deshmukh and Chin is starting to emerge from online tools, including those offered by Google, although translators insist that machines don’t quite produce the best results.

“Companies that use Google continue to send back work for review to us," says Sudheen Mookola Lakshman, managing director of Crystal Hues Ltd, which processes about two million words a month, including for mobile phone brands such as Nokia, Siemens and Motorola.

Attracted by Indians’ proficiency in English as well as cost advantages, foreign translation companies such as euroscript International SA, Lionbridge Technologies Inc. and Adayana Inc. have also set up offices in India over the last few years.

Most of these multinationals have developed their own niches. Apart from offering expertise in foreign languages such as Sinhalese and Arabic, Adayana specializes in eight Indian languages and offers training to both students and companies.

On the flip side, though, quality control remains an issue. Companies are often hard-pressed to find linguists who double as domain experts. At times, there are risks of texts getting lost in translation if a non-native executes the project. Some companies such as Dell Inc. and HCL Technologies Ltd confirm that they turn to native countries for a limited degree of language support.

But Deshmukh doesn’t agree that translators need domain knowledge. “We are trained in the language," she says. “While we don’t have a degree in different disciplines, we need to have knowledge of the subject matter."

At times, companies provide ready glossaries of technical words for additional support. But one of the real dangers in the business is for the meanings of words to be twisted out of context. Translations thus require thorough inspection, says Rohit Dutta, managing director of syselog India Pvt. Ltd, a subsidiary of euroscript International. He offers an example of an error that might be easy to commit: To say “energy cannot be created" is not quite the same as “power cannot be generated". To avoid such errors, most agencies resort to what they call “reverse translation", or getting drafts double-checked by other translators.

Translators such as Tan, mostly home-based workers, encounter a problem of another kind: timely payment. While industry rates work out to Rs2-5 per word, it isn’t always easy to collect paychecks after the task is completed. To discuss these issues, and larger topics such as the role of translators in nation-building, ITA is organizing a seminar in New Delhi on 16-19 December.

Tan says he still enjoys his job, and as a professional it’s his duty to manage crises emerging out of communication gaps and help different parties overcome language barriers. “Sometimes," he says, in a small echo of his Buddhist mien, “translators have to play the role of a peacemaker too."