Home / Politics / He will rock you | KJ Subz
Back
Share Via

He will rock you | KJ Subz

He will rock you | KJ Subz

The year 2000 was a turning point in the life of Subramaniun. A postgraduate from the Indian Institute of Technology, Kanpur, he was always told he had the perfect brew for the things that mean success. Yet that year, after 18 years as a software engineer initially and as a marketing executive subsequently, success took on a whole new meaning.

Between 1990 and 1997, he held his wife’s hand through an illness, till he lost her. “At that point, suddenly, a whole world opened out for me. It hit me that starting that moment everything was new. I had the choice to cling to the pain and live the rut, or create a new life," says Subramaniun, hesitant to talk about the past. 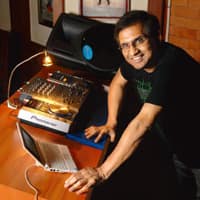 “That day, they just sang my songs, I knew all the lyrics and in that gathering, I was the dude!" says Subz, as he is referred to, pointing out that on a regular day, his memory keeps him from remembering the words for the most popular songs.

The seed sown at that gathering flowered slowly when he began to play and organize karaoke sessions for small gatherings in his apartment complex in Bangalore. After a year of trials and talks, he found himself landing deals with sponsors and malls. “I became an accidental pioneer of sorts. There were no Bollywood karaoke jocks at that time and I started a trend," he says, seemingly surprised at his own success.

It has been a decade since Subramaniun transformed into KJ Subz and he seems to love every bit of the snazzy tag. “The name is largely marketing driven, and derives a humongous equity on the Net because it is unique," says the engineer, now 52, who has hung on to his alter-ego geek guise with his glasses and peppered hair.

“I am a software engineer who turned into a hardware entrepreneur," says Subz. Keeping up-to-date with Web technology is, as he puts it, “a walk in the park". He can’t seem to stress enough on the awesome deal he has landed himself. “I lived the affluent life for more than a decade in the US and moved back around 1999. Between waking up with a jump every morning and owning the best car, I’d choose the jump-start," he says, his eyes twinkling.

“I guess you could call me an idiot," he says, referring to 3 Idiots—the Hindi movie about three friends from an engineering college who decide to pursue their dreams. Subz says he connected with the movie, so much so that the caller tune on his phone plays the song Give me sunshine from the film.

As a karaoke jockey, Subz has gone from playing songs and egging on people to sing, to creating medleys with interstitials that will surprise even experienced crooners. While creating surprises and pushing his understanding of ragas and tunes keeps him going—Subz has no formal training in music—it’s when he is at the console giving people their 5-10 minutes of rock-star experience that he recharges.

Having made the transition, he points out that the past decade has had its share of trying situations and judgemental people. “It’s either feast or famine financially, but if I manage the feast well, I get through the famine," he says.

It’s probably because of the lessons from that journey that Subz could encourage his son to skip college and take the plunge into an animation course right after class X. “He is very artsy and hands-on," he says. “I don’t see why he should study which king did what in which century, and neither does he."