While minimum support prices (MSPs) are announced for 23 crops every year, public procurement is limited to a few such as paddy, wheat and pulses, and the procurement is also largely from a few states

In his budget speech, finance minister Arun Jaitley said that minimum support prices (MSPs) would be fixed at least at 50% more than the cost of production. He later clarified that the cost would not include implied rental cost of land or interest on capital assets. The Commission for Agricultural Costs and Prices (CACP) calculates costs at three levels: A2, which includes costs of inputs such as seeds, fertilizer, labour etc.; A2+FL, including implied cost of family labour; and C2, which also includes the implied rent on land and interest on capital assets.

Who does MSP directly benefit?

One can argue that cultivators of just a few crops benefit from MSP and, among them, only those in some states. While MSPs are announced for 23 crops every year, public procurement is limited to a few such as paddy, wheat and, to a limited extent, pulses. The procurement is also largely from a few states. Three states—Punjab, Haryana and Madhya Pradesh—which produce 49% of the national wheat output account for 93% of procurement. For paddy, six states, including Punjab, Chhattisgarh and Andhra Pradesh, with 40% production share have a 77% share of the procurement.

How remunerative are MSPs? 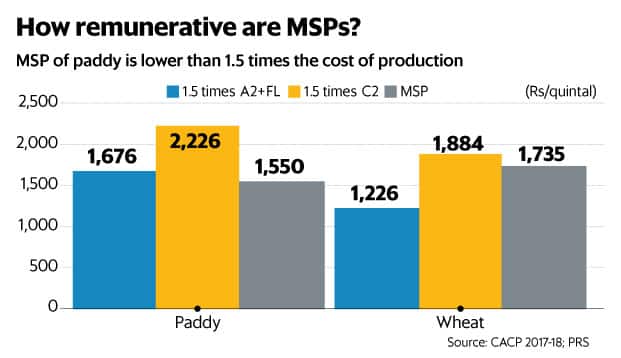 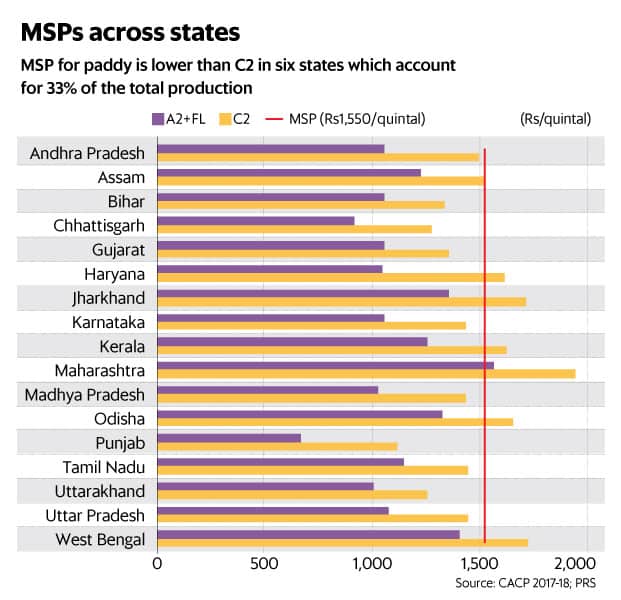 The MSPs fixed for each crop are uniform for the entire country, although production costs vary across states. For example, in 2017-18, the production cost for paddy (A2+FL) was Rs672/quintal in Punjab and Rs1,327/quintal in Odisha, while that of C2 was Rs1,119/quintal and Rs1,656/quintal respectively. In terms of C2, a farmer in Punjab may get 39% returns, while his counterpart in Odisha may make a loss of 6%.

Similar variations are found across states for wheat. In 2016-17, the production cost for wheat (A2+FL) was Rs627/quintal in Punjab and Rs1,862/quintal in West Bengal, while that of C2 was Rs1,090/quintal and Rs2,216/quintal, respectively. However, the MSP covered production cost (C2) in most states that account for 97% of wheat production.