With shrinking farm sizes and lack of accurate land records, farmers find it difficult to generate enough income to provide for their households

From farm subsidies to farm loan waivers, the Indian government spends crores on farmer welfare, but these efforts will be inadequate unless they can tackle an increasingly daunting barrier: lack of land. The provisional figures from the latest agriculture census reveals how land—the most critical input for agriculture—is getting more fragmented. Smaller, more numerous farms have been driven by rural population growth. Between 1970-71 and 2010-11, the number of farms increased by 194%, almost exactly in line with rural population, which increased by 189%. As Ramesh Chand and others pointed out in a 2011 Economic and Political Weekly research paper, this relationship is a reflection of India’s inheritance pattern, which leads to farms divided between multiple heirs (chart 2). Within India though, there is significant variation in farm sizes. With an average size of 5ha, Nagaland is home to India’s largest farms. Punjab and Haryana, two states known for their agricultural output, also have larger farm sizes (3.6ha in Punjab and 2.2ha in Haryana). However, these are exceptions. The majority of India’s farms (86%) are less than 2ha. The bulk of which are located in the poorer states such as Uttar Pradesh and Bihar (chart 3). The Indian experience shows that small farmers are more productive than large farmers. Ramesh Chand and others show that small farmers use more inputs (such as fertilizers), use their land more intensely (planting more crops) and adopt more technology. Yet, despite this efficiency, farm incomes remain poor. It is the poor returns to farming—despite intensive efforts put in by farmers—that lie at the root of India’s farm crisis, and the recent farm angst.

Given household sizes in rural India, small farms struggle to generate enough income for everyone in a household and often lack alternative sources of income. A 2016 paper by Sanjoy Chakravorty of Temple University, and others, uses the National Sample Survey Office’s (NSSO) 2003 and 2013 surveys of farmers to show how farm size is an important determinant of income and, consequently, income inequality.

They find that in 2013, for marginal farmers(less than a hectare of land), household consumption exceeded net monthly income of less than ₹ 5,500 from both farming and non-farming activities. Using the 2015-16 census data, this would mean nearly 100 million farming households would struggle to make ends meet. Examining farmer incomes between 2003 and 2013, they find that incomes grew the least for marginal farmers and growth of incomes was proportional to the size of a farm. Doubling of farm incomes is a reality only for the largest land-owning group (chart 4). 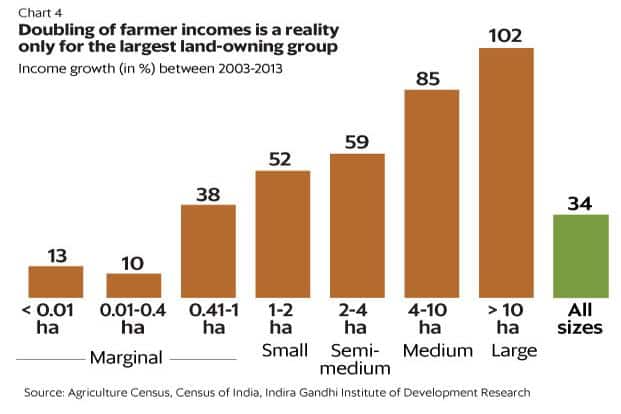 One obvious solution to small farm sizes will be consolidating land into larger farms by enabling land leasing. However, this can be a complex and costly process, made more difficult by the lack of accurate land records. As a report by PRS Legislative Research has highlighted, land records in India are poorly maintained and do not reflect ground realities. It pointed out that, despite most states computerizing and digitizing land records, as of 2017, spatial data had only been verified in 39% of villages. This is particularly problematic for small farmers who, without accurate land records, cannot access credit or secure insurance.

India’s farmers are not alone in these struggles. A 2016 study estimated that around 84% of the world’s farms are less than 2ha. While many of these small farms face the same challenges, some small farmers, such as those in China, have been more successful in securing sustainable livelihoods. This is a result of several different factors, but economists agree that improving land records, investing in research and development, providing local rural non-farm employment opportunities and building better rural infrastructure are policies that can help small farmers.