Retail inflation increases to 2.36% in July from 1.46% in June, wholesale inflation rises to 1.88%, showing effects of implementation of GST and 7th Pay Commission

New Delhi: India’s retail inflation quickened to 2.36% in July, reversing its downward trend, as vegetables prices shot up, reducing the probability of any near-term interest rate cut by the Reserve Bank of India (RBI).

Consumer Price Index (CPI)-based inflation was at 1.46% a month ago.

The pace of decline in vegetable prices slowed to 3.57% in July from a 16.53% contraction in the previous month, data released by the Central Statistics Office on Monday showed.

Data separately released on Monday by the department of industrial policy and promotion showed India’s Wholesale Price Index (WPI)-based inflation quickened to 1.88% in July, led by increases in food and mineral prices, compared with a 0.90% gain a month ago. 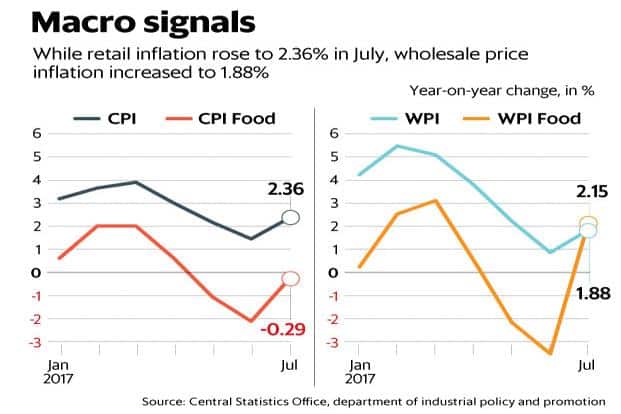 Inflation for housing (4.98%) and fuel and light (4.86%) segments also accelerated in July, reflecting the government’s decision to implement the recommendations of the 7th Pay Commission for central government employees regarding allowances and hike in fuel prices. The government’s recent decision to hike cooking gas prices by Rs4 a month till the subsidy is eliminated may further fuel retail inflation.

Higher prices on account of implementation of the goods and services tax (GST), which came into effect from 1 July, also contributed to the reversal in inflationary trends, said Aditi Nayar, principal economist at ICRA Ratings.

“As the favourable base effect unwinds, vegetable prices record a seasonal hardening and the impact of HRA (house rent allowance, increased in the 7th Pay Commission) pushes up housing inflation further, we expect CPI inflation to ramp up over the next few months, and cross 4% by October 2017. Based on this anticipated trajectory, and the recent commentary by the monetary policy committee, we see a low likelihood of further rate cuts in 2017-18," she cautioned.

The Reserve Bank of India (RBI), which cut its repo rate by 0.25 percentage points earlier this month, retained its neutral policy stance, citing uncertainty on the future trajectory of inflation because of several uncertainties. “If states choose to implement salary and allowance increases similar to the centre in the current financial year, headline inflation could rise by an additional estimated 100 basis points above the baseline over 18-24 months. Also, high frequency indicators suggest that price pressures are building up in vegetables and animal proteins in the near months," it added.

The second volume of the Economic Survey 2016-17 presented on Friday in Parliament took a contrarian view and maintained that India is undergoing a structural shift toward low inflation, mostly due to changing dynamics in the oil market, which has capped upside risks.

“More recently such shifts seem to have been missed, for example, in the last 14 quarters, inflation has been overestimated by more than 100 bps (basis points) in six quarters with an average error of 180 bps," it said.

The Economic Survey implicitly blamed RBI for the slowdown in economic growth due to “tighter than assumed" monetary policy.

While the volume of monsoon rainfall is near-normal, its uneven geographic spread poses a concern to future inflationary trends. For instance, the southern peninsula has seen a substantial 16% shortfall in rainfall. The decline in sowing of various oilseeds (-9.9%), pulses (-1.6%) and coarse cereals (-1.5%) may also affect their prices and exert some upward pressure on inflation in the coming months.

Devendra Kumar Pant, chief economist at India Ratings and Research, said that monsoon-induced inflation shocks from fruits and vegetables are likely to reduce, but the unfavourable base effect from August may lead to further acceleration in retail inflation.