Revenue shortfall may limit the scope of GST rate cuts

New Delhi: The rising gap between goods and services tax (GST) targets and actual revenue collections may limit the scope for large-scale rate cuts, with states favouring stabilization in revenues before any further rate reduction. As a result, the next meeting of the GST Council on 28-29 September is unlikely to feature major rate cuts to accommodate demands from the micro, small and medium enterprises (MSMEs).

The central government, concerned about the revenue shortfall, is also reaching out to states to understand the reasons behind it.

With anti-tax evasion measures like the e-way bill kicking in, tax authorities were targeting monthly GST revenues of ₹ 1 trillion in 2018-19. The collections have not kept pace with these targets, except in April and that too because of spillover tax payments from the previous year. 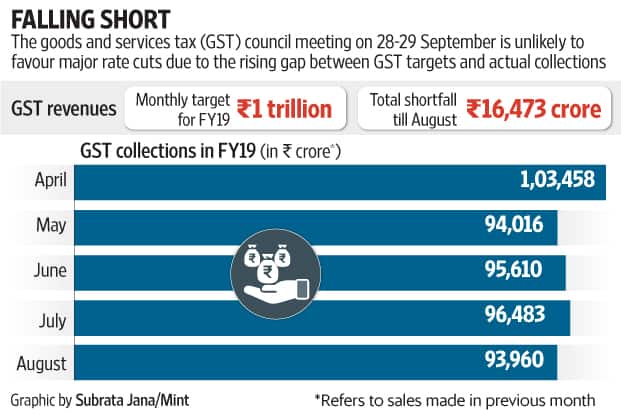 The large-scale rate cuts on white goods effected in July have led to a further fall in revenues in August. So far this year, the total shortfall in GST collections from targets was at ₹ 16,473 crore with the average monthly collection at ₹ 96,705 crore.

A state finance minister, who did not wish to be identified, said that with GST revenue is yet to stabilize, the scope for further rate cuts was limited. “Even if there is a rate cut in the 28-29 September meeting, it will be on insignificant items with very limited revenue repercussions," he said.

A central government official, who did not wish to be identified, said there is an expectation that revenue will pick up in the festive season as consumer demand increases. “But one will have to wait and see by how much collections increase," he said.

Worried about the pace of growth of GST revenues, finance secretary Hasmukh Adhia is touring states like Uttarakhand, Himachal Pradesh and Bihar which have reported a major shortfall in revenues to understand the reasons for the revenue shortfall.

In terms of absolute numbers, Karnataka received the highest amount of compensation from the central government in 2017-18 of ₹ 7,535 crore for revenue shortfall in the GST regime, followed by Punjab ( ₹ 4,618 crore), Gujarat( ₹ 4,277 crore) and Maharashtra ( ₹ 3,077 crore). To be sure, Gujarat and Maharashtra have now recovered most of these losses.

“In the case of economically strong states, although the compensation received may be higher in absolute numbers, the revenue shortfall as a percentage of state tax receipts may not be high. Union revenue secretary is looking into the issue of revenue shortfall," said a member of the GST Council who declined to be named. Punjab, for example, lost receipts from the pre-GST era tax on procurement of agriculture goods, which has been subsumed into GST, said the council member.

Punjab finance minister Manpreet Singh Badal said in his FY19 budget speech in March that uncertainty around tax receipts in the initial months of GST implementation impacted the state’s ability to release funds for development work. Former Karnataka chief minister Siddaramaiah said in March that frequent changes in the GST regime and glitches in the IT system had affected tax receipts.