Across income levels, Indians in rural regions spent less on services, from domestic help to transport to phone bills

New Delhi: Whatever their income, people in urban areas spend substantially more on services every month than their rural counterparts, data showed.

The urban rich (the top 20% of the population based on monthly per capita expenditure) spent almost three to four times more than their rural counterparts on services including communication services (e.g., phone bills); recreational activities like watching movies in theatres; and hairdressing and beauty parlour services.

But monthly per capita spending by rich urban households at ₹ 185.52 on domestic help—maids, gardeners, cooks, etc.—was far higher than that of the rural rich at ₹ 7.66.

The figures are from the survey on household expenditure on services and durable goods derived from the 72nd round of the National Sample Survey, for the July 2014-June 2015 period. 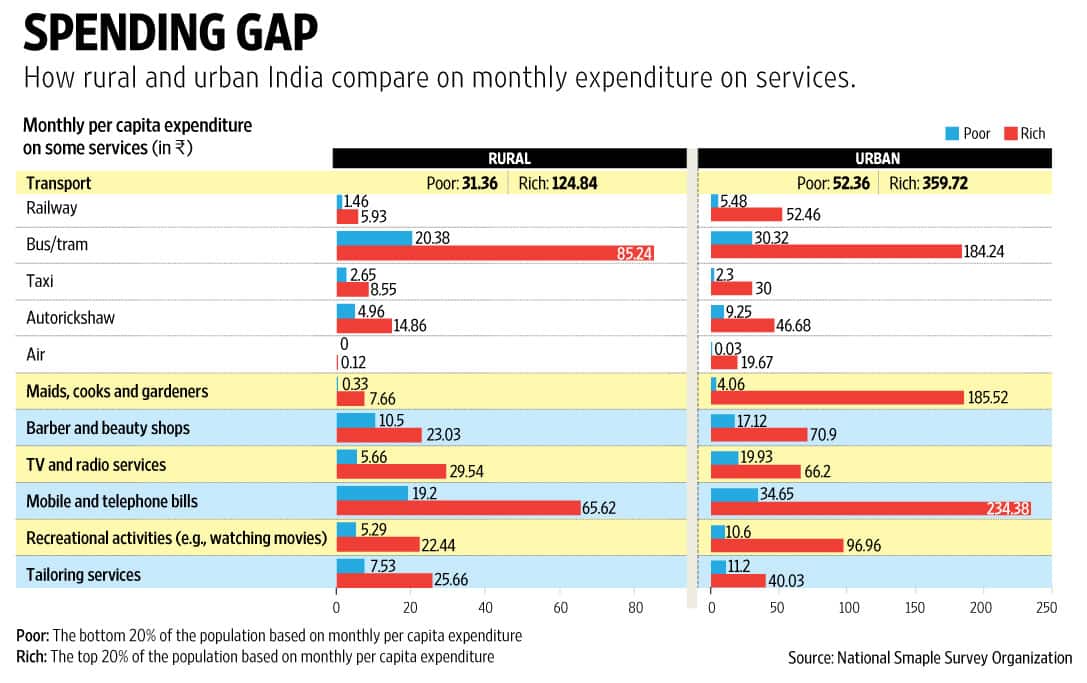 The urban poor (the bottom 20% of the population based on monthly per capita expenditure) spent almost double what the rural poor spent on barbers and beauty shops and on telephone and mobile bills. This difference increases when it comes to spending on TV and radio services, with the urban poor spending almost three times more than the rural poor.

Spending on transport services by the urban rich was also almost three times that of the rural rich, but this difference narrows considerably as we move from higher to lower income levels.

Spending by the urban poor on transport services was only 67% higher than the rural poor. The most frequently used mode of travel is buses in both urban and rural areas and across all income classes. A poor rural household spent ₹ 20.38 on travelling by bus in a month, as compared to ₹ 30.32 by the urban poor household.

On the other hand, the urban rich spent ₹ 184.24 on bus travel in a month, as against ₹ 85.24 by the rural rich. Spending on air and rail travel was very low in rural areas as compared to urban areas, not surprising given the state of connectivity in remote areas.

“Intuitively, communication should not be the most spent among miscellaneous services as its cost is falling by and large. In urban areas, the rich are spending the most on domestic services of the maids, cooks and drivers as their cost is increasing sharply, though it is not the case for other households in other income classes," said Pronab Sen, former chairman of the National Statistical Commission.

“The cost of the television and radio services is also rising, mostly because of the rising cost of cable and dish TV," he explained.

He added that, ideally, the data on transport services should have mentioned the break-up of expenditure on the lines of leisure and work. “In case of transportation services, wide disparity is found between the rich and poor in both rural and urban areas because the rich try to use transport mainly for leisure purposes while the poor try to save every rupee of their transportation cost. Hence, it is important to give the expenditure breakup for transport on leisure and work separately," he said.