For victims of cyber stalking, justice is elusive

While laws against harassment are in place, implementation is a problem and many cases go unreported

New Delhi: Early last month, a 21-year-old in Tamil Nadu’s Salem district saw a picture of her face, digitally superimposed on the scantily-clad body of another woman, posted on Facebook. She informed her parents, and told them the name of the man responsible for it.

She had recently graduated and he worked at a powerloom unit. She had rejected his proposal of marriage, and to get back at her, he morphed her picture using a mobile phone app, uploaded it on Facebook and tagged her on the post. The woman’s father lodged a complaint with the Cyber Crime Cell on 23 June. Four days later, she found another doctored image tagged to her Facebook ID—this time with her name and her father’s phone number on it.

On the same day, the woman hanged herself. In her suicide note, she repeatedly said that she hadn’t sent any such pictures to anyone and wrote, “When you people do not believe me, what is the use of living?"

In a separate case last October, two boys in Bengaluru along with their friends kidnapped a 15-year-old and clicked her nude pictures. The girl committed suicide. Her suicide note read: “I have decided to die as I have lost my honour. I and my family need justice."

“Online harassment and cyber crimes have not been given the kind of priority in India as these deserve. The mindset is such that these crimes are perceived as minor crimes. And going by the numbers, we know that by and large, India has failed in getting the requisite cyber crime convictions, and the number of such crimes is rising," said cyber law expert and Supreme Court advocate Pavan Duggal. 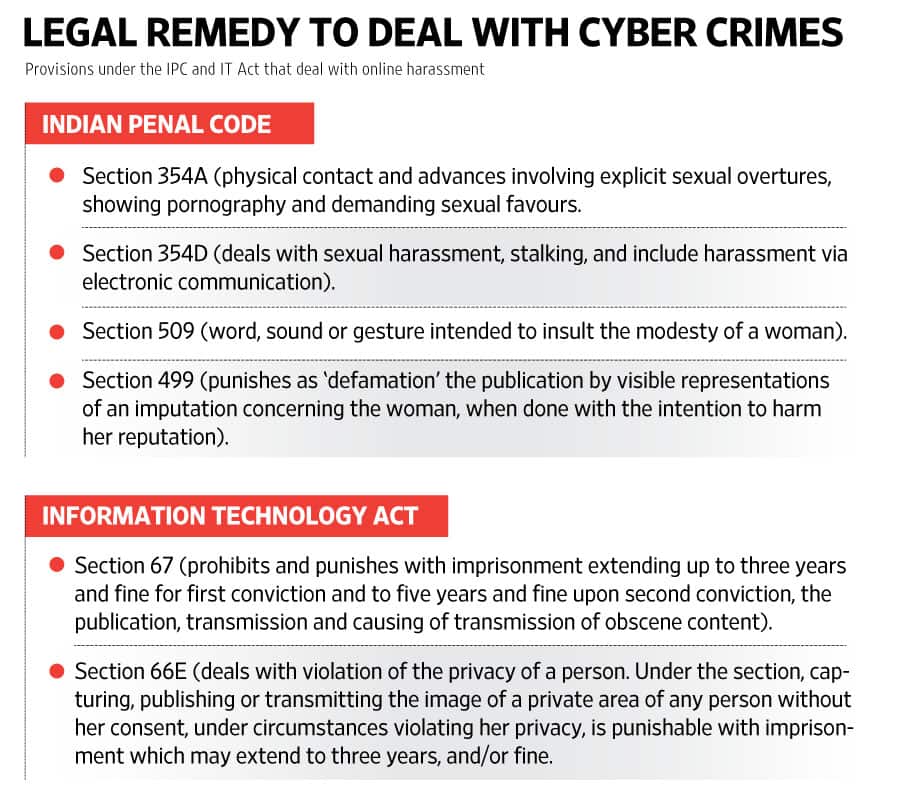 In July 2015, the cyber cell of the Mumbai Police secured the first ever conviction in the state under the Information Technology Act since cyber-laws were framed in 2000. A city court sent Yogesh Prabhu, 36, an executive in a private company, to jail for three months for stalking and sending obscene images to his colleague who had earlier rejected his proposal. The police seized evidence such as IP addresses, laptops and statements from the server used by Prabhu to send the emails.

Unlike Prabhu’s case, in the case of the Salem woman, as reported by The Indian Express, even after repeated complaints from the girl’s family, the police took no action. In fact, according to the report, a cybercrime head constable in the district demanded a free mobile phone for probing the case. Despite receiving a ₹ 2,000 mobile phone, no action was taken, it said. (The constable has since been suspended.)

“In most cases, police hasn’t been able to either collect electronic evidence or preserve it or produce it or prove it. Even if you get a cyber crime registered, the police invariably doesn’t register these cases because they are not sure if they will be able to crack it. The police is more comfortable with the traditional laws relating to crimes that happen physically. There is no capacity building among law enforcement agencies. So, majority of these cases result in acquittal," says Duggal.

According to a study, Cyber Law and Information Technology, by Talwant Singh, additional district and sessions judge, Delhi, as published in delhicourts.nic.in, a survey indicates that for every 500 cyber crime incidents that take place, only 50 are reported to the police and out of that, only one is actually registered.

Out of the few that get registered, cases of famous people and only a few involving unknown people, make news. Women—particularly those with strong opinions (remember Congress party spokesperson Priyanka Chaturvedi threatened with “rape and death like Nirbhaya"?)—have been targets of online harassment for long. Casual threats to gang rape, murder and violence are very common online.

As American scholar Mary Anne Franks, in a 2009 study Unwilling Avatars: Idealism and Discrimination in Cyberspace, said, women haven’t actually achieved this “bodiless" freedom online. They are embodied in distributed pictures and in sexual comments, whether they like it or not.

“In order to survive this kind of shaming, you need support structures. It is an incredible burden. Social media has become a platform for shaming. It is like standing on a public street being jeered at by a man, except that on a public street, people aren’t continuously posted, while online is a continuous space. Once your picture is out there, it will stay there. Even if you get it removed, there is someone with a screenshot of it. In cases like this (the 21-year-old victim from Salem), the burden of shame is unbearable, particularly without any support," says activist and secretary of the All India Progressive Women’s Association, Kavita Krishnan.

Trolling is nothing new for Krishnan. In May, she lodged a police complaint against a former journalist who made a Facebook post that amounted to sexual harassment, following her comment in a TV debate that one could only pity people who fear “free sex" because “un-free sex" is nothing but rape. However, she says it’s been a month and nothing has happened. The police had said it will get back.

“Patriarchy enables you to put down a woman in a way you cannot do to a man. The fact that she or any other woman had to be concerned about what people will say, how they will brand her as immoral, is not something that men have to deal with," says Krishnan.

The impact of online harassment is as much if not more than the harassment in the physical world, even if, as Duggal says, “our mindset is such that we don’t recognize it". Delhi-based clinical psychologist Pulkit Sharma says, “When someone harasses you online, it is viewed by a much larger audience and you feel helpless about not being able to contain the spread of that false information or a photograph. So, the sense of shame, the trauma, the feeling of being exposed, is much, much higher."

With technology democratizing the social media—India has now around one billion mobile subscribers and an estimated 500 million Internet users—there has been a change of the profile of an average cyber criminal, and there also has been a rise in cases of cyber crime in the country, particularly those involving women.

“Earlier, there was a certain profile of cyber harassers—mostly in the age group 11-25 years, and educated. Now, more and more people who are not very educated, but are mobile-literate are getting involved in such crimes. Some are so tech-savvy that they demand money in bitcoins now. This is converging into a phenomenon of social media extortion," says Duggal.

Most of such cases go unreported, either by police or by families themselves, because of the belief that these acts of harassment are regrettable but not really punishable. Even though laws against online harassment are in place, implementation of these laws is where the problem lies.

Till March 2015, the government used Section 66A of the Information Technology Act as the remedy for all online abuse, but the Supreme Court struck it down as unconstitutional. However, there are provisions under the Indian Penal Code which provide direct legal remedy to harassment.

Despite legal provisions, there are loopholes, says Duggal. “After the IT Act amendment, barring a few cyber crimes, almost all are made bailable offences. So, there is no deterrent. People know they will be eventually bailed. And after being bailed out, people go back and destroy incriminating evidence." And in many cases, the servers used are outside the country and the government can do only so much.

DailyO reported that immediately after her death, the accused in the Salem case removed the second picture from Facebook, a piece of evidence that would have substantiated the stalking charge. He was arrested and confessed to the crime.

The woman is no longer around to tell her side of the story, but the note she left points to the perilous Internet landscape that many others like her traverse every day.