Hong Kong: Global consumer confidence is rebounding, and in the US has risen for the first time since 2007, amid signs that the world economy is picking up although spending is still restrained, a survey showed on Wednesday.

Confidence was highest in India, followed by Indonesia and Norway, and was weakest in Japan, Latvia, Portugal and South Korea, although in Korea it had improved markedly, according to a quarterly survey by Nielsen Co., conducted between 28 September and 16 October. 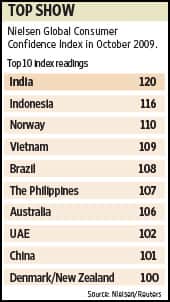 In the US and Europe, high unemployment continued to discourage spending on big-ticket items although confidence had improved as the worst appeared to be over for those economies, New York-based Nielsen said.

In the US, consumer sentiment rose from three months ago for the first time since early 2007. The data contrasts with a Conference Board index of US consumer confidence, released on Tuesday, which showed a sharp deterioration in confidence this month.

The US reading in The Nielsen Global Consumer Confidence survey at 84 was up 4 points from a similar survey in July but just below the global average reading of 86 and well below India’s score of 120 and Indonesia on 115.

“While consumer confidence in the US edged up 4 index points, that hasn’t translated into spending confidence for the vast majority of American consumers," said James Russo, vice-president, global consumer insights at Nielsen Co. “Clearly, this recovery will be manifested in measured and restrained spending as consumers work to repair their balance sheets."

A reading above 100 is considered optimistic. The global average was up four points from a similar survey in July.

Japan and Spain were the only markets in the latest survey to register a decline in confidence from July.

Japan’s score dropped by 2 points while the reading for Spain—which the International Monetary Fund has predicted will be the only euro zone economy to contract in 2010—fell 4 points to 74.

Hong Kong, which pulled out of recession in the second quarter, marked the biggest increase in confidence as its score jumped 14 points from the July survey to 93.

South Korea’s score rose by 13 points to 53 although it ranked third lowest among markets covered. Brazil’s score increased by 12 points to 108, or fifth place. Australia and New Zealand also saw double-digit increases in their scores to 106 and 100, respectively.

The survey polled around 30,500 consumers in Europe, the Asia-Pacific, North America and West Asia about their confidence levels and economic outlook.

Confidence in major European markets remained low with Germany scoring just 77, up from 72 previously; the UK on 75, up from 72; and France on 67, up from 60.

At least 60% of French, German and Irish consumers believed that economic recovery was more than a year away, Nielsen said. Europe, especially eastern Europe—where scores were on average 10 points below those of western Europe—expected a longer road to recovery than all other regions including the US, the survey showed.

Among the other Bric economies, Russia’s score rose 4 points from the previous survey to 85 while China’s increased by 6 points to 101.