New Delhi: A rare visit to India by China’s defence minister should help avoid flare-ups along the border between the nuclear-armed Asian giants at a time when Beijing is grappling with a change of leadership and friction in the South China Sea.

But General Liang Guanglie’s trip - the first by a Chinese defence minister in eight years -- also highlights growing competition between the two emerging powers as they jostle for influence and resources across Asia.

Liang is due to arrive in Mumbai on Sunday afternoon after stopping in Sri Lanka, the island nation off the south coast of India that sits on vital ocean trade routes. 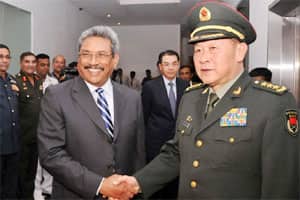 “China attaches great importance to its relations with the South Asian nations, and commits itself to forging harmonious co-existence and mutually beneficial and win-win cooperation with them," he said in speech to Sri Lankan soldiers.

“The PLA’s (People’s Liberation Army) efforts in conducting friendly exchanges and cooperation with its counterparts in the South Asian nations are intended for maintaining regional security and stability and not targeted at any third party."

As neighbours and emerging superpowers, India and China have a complex relationship. Trade has grown at a dizzying rate but Beijing is wary of India’s close ties to Washington and memories of a border war with China half a century ago are still fresh in New Delhi.

Despite 15 rounds of high level talks to resolve the dispute about where their Himalayan border lies, neither side is close to giving up any territory. Liang is not expected to broach the territorial issue on his trip.

Analysts say Liang’s India tour will demonstrate that Beijing is managing the often twitchy relations with its neighour just ahead of its once-in-a-decade leadership transition.

“China’s leadership has one primary objective: how do we continue without any convulsions," said Uday Bhaskar, director of the National Maritime Foundation, a New Delhi think-tank.

“You do not want to have anything to do with India just now which is rocking the boat, as it were," he said.

Emphasising China’s growing clout in the region, President Mohammed Waheed of the Indian Ocean archipelago nation the Maldives left for Beijing on Friday to arrange $500 million in loans, partly for infrastructure.

In turn, India courts close ties with Vietnam. Its exploration of an oil block in the South China Sea has needled Beijing, which claims the sovereignty over almost all of the sea and has stepped up its military presence there

Both China and India say they are committed to attaining prosperity through peaceful means. Business relations are booming and trade flows have reached an annual $75.5 billion, up from just $3 billion a decade ago. Trade is skewed in China’s favour.

During the four day trip to India, Liang will talk about border security with his counterpart defence minister A.K. Antony, India said this week, and they may announce a new round of joint military exercises -- following on from a recent joint naval practice in Shanghai.

No more details have been announced, but the two sides are expected to discuss their mutual neighbours Afghanistan and Pakistan, and the security challenges they face when NATO forces start leaving the region in 2014.

The last time a Chinese defence minister visited India was in 2004. Since then, Beijing has spent billions of dollars on train lines, roads and military hardware in Tibet. India has also spent heavily to strengthen its defences along the frontier, which the two sides dispute, despite years of talks.

Minor incidents of both nations’ troops crossing the border are common, but major flare-ups are avoided through meetings of low and mid-rank officers, as well as senior military delegations and a cabinet-level hotline.

Instability has increased in Tibet in the lead up to the Chinese leadership change, with 51 Tibetans setting fire to themselves in gruesome protests against Beijing’s heavy-handed rule in the region.

Liang’s visit follows a number of high intensity unilateral military exercises by both countries in the border region in the past year.

More recently, India’s ambassador to China was allowed to tour Tibet, a rare occurrence, and an Indian military delegation was taken to the region’s capital Lhasa.

Jayadeva Ranade, a retired Indian senior civil servant and China expert, said China’s recent warmth toward India reflected its concerns about military escalation in the South China Sea, and perception that India is being drawn into the US “pivot" to Asia, which Beijing sees as containment.

While he welcomed Liang’s trip, Ranade said India was disappointed China’s next president had not yet visited.

“It’s a tepid gesture -- earlier they were expecting a higher level visit, Xi Jinping was expected to come. That would have been something," Ranade said. Reuters