Bangalore / New Delhi: At Kanakpura, a taluk on the outskirts of Bangalore, farmers are fairly certain that the lacklustre monsoon so far is strikingly similar to 2002, when India faced the first of its three droughts of the last decade. V. Gopalakrishna Gowda, a farmer and general secretary of the association of gram panchayats, ranks this among the worst droughts he has seen.

“This one ranks right along with the 2002 drought," he said. The 2002 drought is perceived to have led to the defeat of the S.M. Krishna-led Congress government in the 2004 assembly elections. 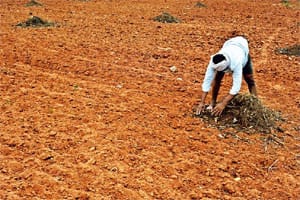 Dry patch: A farmer at Somanahally village in Kanakpura. Fields ploughed as long as two months back have been left unsowed in the region due to lack of rain. Jagadeesh NV

The monsoons remain well below normal this year, despite predictions of normal rainfall. Mint’s Ruchira Singh talks what how that could affect farmers, the prices of food, and the economy.

A drive through the picturesque countryside near Kanakpura reveals fields ploughed as long as two months back, but left unsowed due to lack of rain. Gowda said that Kanakpura isn’t unique and that serious drought conditions have set in at Chamarajnagar, Kolar, Chikballapur, Tumkur and Mysore districts. The key crops grown in these parts of south Karnataka include ragi, paddy and tobacco, and have been affected because of scanty rain.

The woes of these parts of Karnataka, which have seen a rainfall deficit of 46% this monsoon, could be reflected in several other states. Monsoon rainfall has been deficient in June, with the monsoon wind and cloud formation lacking both vigour and pace in its journey into India’s agricultural heartland. Only on Wednesday did the monsoon advance into central India, a key agricultural zone and important for India’s rice output.

A bad monsoon, or a drought as severe as the one in 2009, could significantly affect India’s summer, or kharif crop.

During the June-September monsoon, India’s farmers mainly produce rice, coarse cereals such as jowar and bajra, oilseeds such as soybean, sunflower and groundnut, and pulses such as tur, urad and sugar cane, in that order.

These crops, sown after the first rains in June-July and harvested in October-November, are important for the economy as much of India’s festival season consumer demand depends on the income farmers receive after the harvest.

The concerns over the new crop season come after bumper production in the July-June crop year of 2011-12, when the agriculture ministry estimated a total foodgrain crop of 252.56 million tonnes from the kharif and rabi seasons, up from 244.78 million tonnes in the previous year.

Agriculture minister Sharad Pawar said rice has been sown in 3.96 million hectares, which is comparable with the normal area sown at this time of the year but less than last year by 0.19 million hectares. There have been widespread rain in the north-eastern and eastern states, coastal Andhra Pradesh and Karnataka, and this will help in increasing transplantation of rice, he said.

Officials in the India Meteorological Department (IMD) said the rainfall deficit was a concern, but didn’t yet merit panic. India’s key agricultural months are July and August, which see 70% of the monsoon rainfall. The rain this year is expected to be 95% of the long-term average and there are no indications yet for these numbers to be revised.

“Over the next couple of weeks, we expect the monsoon to enter several more parts of northern India," said D.S. Pai, IMD’s chief weather forecaster. “There’s no reason yet to change our estimates from last month," when the forecast for July-August were issued.

Another IMD scientist, who didn’t want to be named, said heavy rains in the north-eastern states were compensating for the all-India shortfall.

“The numbers may be made up, but the current trend continuing beyond a couple of weeks isn’t good," he said. “There has to be more rain over central India, though as of now—for agriculture—there’s little reason to panic."

Farmers outside Karnataka don’t seem to be too worried.

“We will have a better picture by 15-20 July," said Ajay Vir Jakhar, chairman of farmers’ forum Bharat Krishak Samaj. “A delay does not mean rains won’t come at all. Maybe there is something to worry about, but it’s a little too early to predict the crop. The yield of the rice crop can improve in the latter part of the season if the rainfall picks up."

“It is early days yet, but certainly early signs of concerns have set in. However, there is still a possibility the rains can pick up and make up for the deficit. Crops require not just timely rain, but also for it to be evenly spread through the season." Yes Bank has a significant exposure to the agriculture sector.

M. Shankarappa, a 35-year-old farmer in Somanahally village, in Kanakpura, isn’t too reassured. “What are we supposed to do if it doesn’t rain properly?" said the farmer, who grows ragi primarily for his own family’s consumption.

Already, the detrimental effects of weak rains are visible in these villages. “People will go bankrupt if it doesn’t rain soon," said V. Chalavamurthy, vice-president of Somanahally grampanchayat. Many are voting with their feet. In his village of 185 houses, a majority of the men have begun working as security guards in Bangalore, and the women are going to work at garment factories. Their premonition about the monsoon doesn’t seem to bode well for the rest of the country and the wider economy in general.

Jacob P. Koshy in New Delhi contributed to the story.