The ambitious yet difficult task of universal immunization

Mission Indradhanush aims to increase India's immunization coverage to 90% by 2020, but is that possible?

We don’t want to get our child vaccinated. Whatever happens will be god’s will," said Meera, who is a road worker at Panipat’s Hanuman Chowk, standing beside the few tents lining the road that shelter labourers and workers from handloom factories nearby.

Meera’s two-year-old is one of the children in the 201 districts targeted in the first phase by Mission Indradhanush, an ambitious plan launched by the National Democratic Alliance (NDA) government to increase India’s immunization coverage from 65% to 90% by 2020. And this compares with the fact that between 2009 and 2013, the proportion of immunized children barely grew from 61% to 65%.

The challenge faced by the immunization team at Hanuman Chowk is one of the myriad obstacles that the NDA has to overcome if it has to realize almost universal immunization in the next five years. To put it more bluntly, to avoid Meera’s child becoming part of a daunting health statistic of India—500,000 children are estimated to die every year from vaccine-preventable diseases.

Mission Indradhanush was launched in December to immunize all children against seven vaccine-preventable diseases diphtheria, pertussis, tetanus, childhood tuberculosis, polio, hepatitis-B and measles. Apart from these, vaccines for Japanese encephalitis and haemophilus influenza type-B are also being provided in some states.

The 201 high-priority districts account for nearly 50% of the unvaccinated or partially vaccinated children in the country. The ministry of health and family welfare while prioritizing districts focused on high concentration of urban slums with migration, brick kilns, construction sites, and hard-to-reach populations.

Panipat, the hub of handloom industries, is populated with slums inhabited by migrant workers from states including Bihar, Uttar Pradesh, West Bengal and neighbouring countries such as Bangladesh and Nepal—and typically has a major chunk of unvaccinated population.

The mission, the rounds for which began on 7 April, has so far fully immunized 1.9 million children—as opposed to the target of 4.5 million that it had set for itself in these four months.

“There needs to be awareness regarding immunization and life is a precious concept, which is completely missing. Giving the vaccine causes fever and the parents do not want to sit at home to take care (of the children)," said Inderjeet Singh Dhankhar, civil surgeon, Panipat.

According to Dhankhar, Panipat has a population of at least 150,000 migrants who are constantly on the move and are hard to track. “Biggest constraint here is migrants who speak different languages. It is very hard to convince them to get their kids vaccinated as immunization is not a priority for these migrant labourers. It is livelihood (instead)," he said.

More than 26 million children are born in India every year, but nearly 1.8 million die before their fifth birthday. According to latest government data, more than 28% of children were not vaccinated because their caregivers did not feel the need for vaccines, while not knowing about vaccines was the second largest cause of unvaccinated children. For nearly 15%, either the time was not convenient, or they did not have time. Other reasons included not knowing where to go for immunization, wrong advice from someone and not being able to afford the cost. 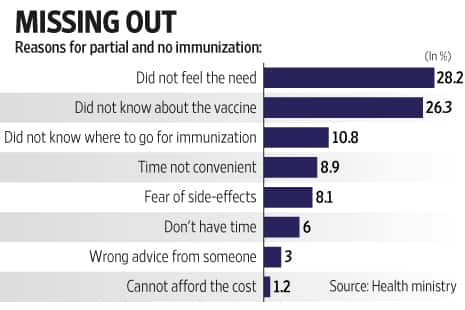 “Factory owners don’t take responsibility or give an off as it is 24x7 work. The workers don’t wish to lose even one day’s wages to take care of the child," said Manish Passi, urban nodal officer in Panipat for child health and immunization. He added that during Mission Indradhanush, the camps would start at 10am and continued till 4pm, which were usually working hours for labourers.

There are other challenges too.

“We did get our child vaccinated once, after which she got fever and a swelling. We won’t get her vaccinated again," said Lal Munni, a resident at Sena Colony, a dimly lit slum adjacent to a handloom factory.

Two of the main reasons for dropouts in Panipat were loss of daily wages and fear of side-effects of the vaccine. The BCG vaccine causes swelling, while the pentavalent vaccine causes fever for a day.

“This is a huge factor and there are a couple of solutions. The acellular pentavalent vaccine used in private hospitals does not cause any fever, although it is slightly more expensive, and a syrup instead of the Paracetamol tablet given for fever would be better for infants," suggested Dhankhar.

In Panipat, there is approximately one multipurpose health worker (MPHW) per 7,500 people, according to government officials stationed in the city. These workers who carry out the immunization, earlier referred to as auxiliary nurse-midwives (ANMs), are often overworked and face challenges in communication due to the lack of ASHA (accredited social health activists) workers from within the communities.

“They throw us out of their homes and do not let us sit anywhere close to their homes as they are ashamed," said Anuradha, an MPHW who ran immunization camps in the heart of slums near handloom factories. She added that they had not received salaries for the past four months and had to travel to potentially unsafe areas, often without official conveyance.

Apart from the four dedicated weeks for Mission Indradhanush, the government already carries out routine immunization on two days every week as part of the National Health Mission. Even though 10 million sessions were conducted in 2013-14, the immunization coverage in the country still stood at 65% in 2014.

According to the health ministry, out of the children who were left unvaccinated or partially vaccinated, 62% were because of communication gap and 12% were due to an operational gap (referring to either a shortage of manpower, lack of skilled manpower or damaged vaccines). While Mission Indradhanush aims to fill the gap, government officials say these four weeks of immunization drives may not be enough.

Pradeep Haldar, deputy commissioner for immunization at the health ministry said: “The biggest challenges in implementing the mission is identifying the pockets in every district which are the most needful and making microplans for these pockets. Secondly, apart from mass-media campaigns for awareness, interpersonal communication between community and health workers is critical to the success of the mission."